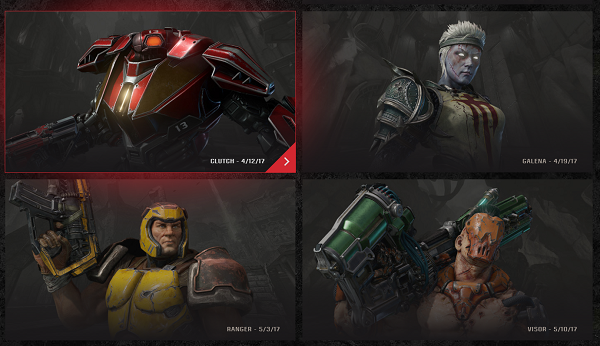 Quake Champions was playable this weekend at the Penny Arcade Expo in Boston and fans had the chance to try out the game for themselves. Included in the demonstration version of the game were playable heroes who have been confirmed but not fully revealed on the game’s official website.

One such hero – Clutch, described as the “Awakened Automaton” is briefly shown on the character select screen of Youtuber CamerBOwen’s seven minute off screen video taken at Bethesda’s booth. This brief glimpse of Cluth’s abilities give us a better sense of some of their statistics but some vital information still remains obscured.

What we’ve learned about Clutch from this footage:

We still don’t know what Clutch’s heroic ability is as the text is either too blurry in the off-screen video or it was purposely greyed out in the PAX East build to prevent too much new information from leaking out before the planned information rollout. 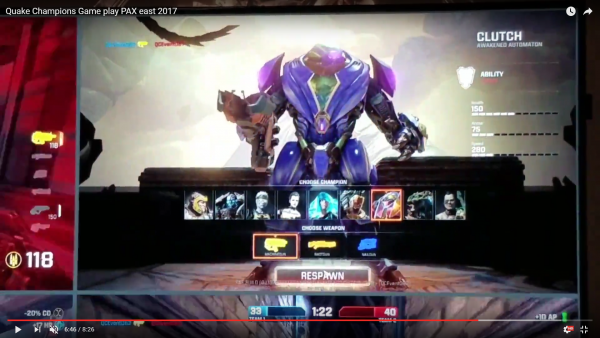 Here is a blurry screengrab of Clutch on the Hero select screen. From this screengrab we can also tell that there will be nine total heroes in Quake Champions at this point in development. This is noteworthy as the official website for Quake Champions only lists eight confirmed heroes. Each hero is set to get their own debut trailer, similar to the one that dropped for Nyx last week. Here are the trailer dates as currently listed on the site:

This points to a possibly open beta date sometime in early Junem, as Bethesda / id Software are already accepting sign-ups for the closed beta that is expected to launch in the next couple of weeks. When Quake Champions launches later this year it will be free to play with only Ranger selectable and the other heroes rentable with in-game currency or via one-time purchase unlock.