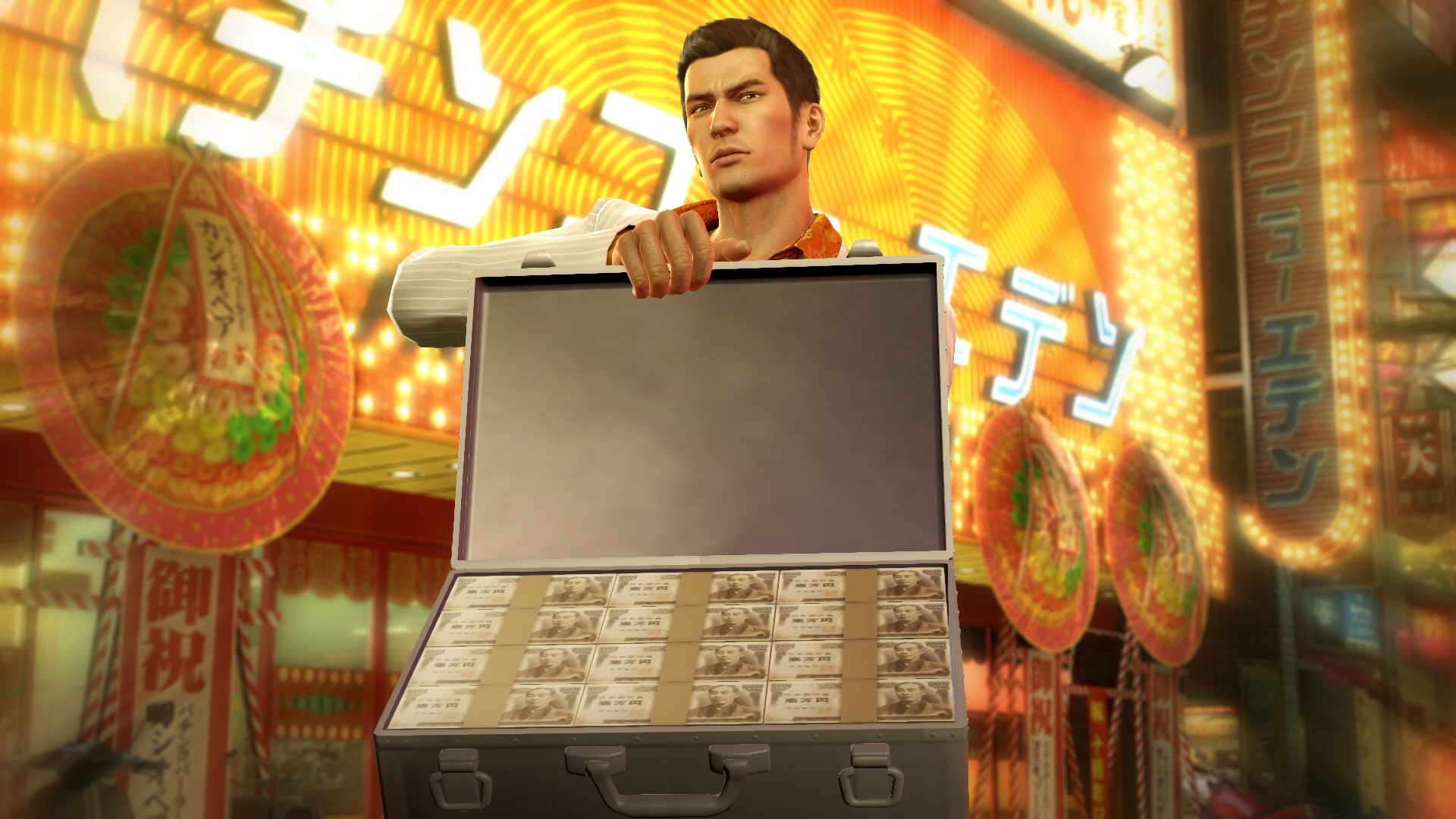 Evaluating an installment of an established franchise offers particular challenges. Do you look at it in a vacuum, or as a part of the bigger picture? Should a title stand on its own, or work necessarily with the rest of the series? There is no simple answer to these questions. Yakuza 0, releasing Tuesday, January 24th, is the prequel to Sega’s long-running Yakuza series, and overall a great game in its own right.

Taking place in Japan during the real estate boom of the 80s, Yakuza 0 tells the story of the series’ main protagonist Kiryu Kazama and his recurring rival Goro Majima. Much younger and less wise to the world than we are accustomed to seeing, these two become involved in the machinations of the Tojo family of Yakuza. Their naiveté leads them deep into conflict with their objectives and personal moralities as they progress in the underworlds of their respective districts. 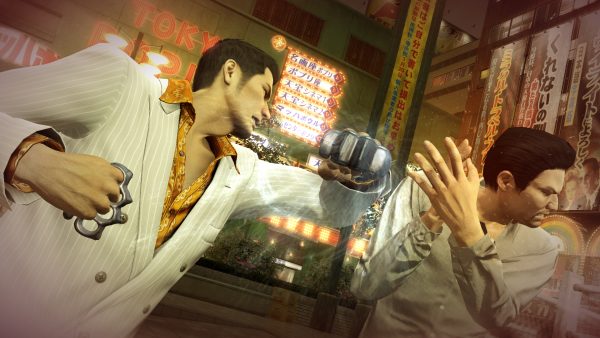 Kiryu’s chapters take place in the Kamurocho District, a tightly-packed neon paradise of excesses. Here, he attempts to discover who framed him for a murder of a man who Kiryu shook down for loan payment. As he progresses he gets involved with a shady real estate company and runs a collection of businesses in the District, assigning managers and collecting money from them while continuing his search.

Majima, meanwhile, is a nightclub manager in Sotenbori, and he is trying to get back into the Yakuza after being banished for a failure to follow orders. Managing involves tasks such as dealing with unruly patrons (without laying hand on them, in fact), and hiring new hostesses to entertain the clientele. These segments, in all honesty, can be a little uncomfortable and I found myself not really looking forward to them.

Which is unfortunate, as Majima’s chapters contain some of my favourite side activities in the game. The crafting system is odd and feels really forced, but it’s connected to an agent dispatch mechanic similar to Final Fantasy Tactics or Assassin’s Creed Brotherhood, and I couldn’t help but get really involved with trying to see what could happen to my agents as I sent them around the world to look for wood, iron, and umbrellas.

The side content is where the game mostly shines, with hundreds of side stories to go through, and oh so many minigames. There are multiple variants of pool alone, and these are satisfying and thorough enough to sink time into without playing the rest of the game. Darts, bowling, Space Harrier – there are dozens of games you can play for hours. These games also lead to side stories of their own (the dancing minigame in particular features several stories and dance battles to take part in) and before long you risk losing sight of the plot in favour of more side content. 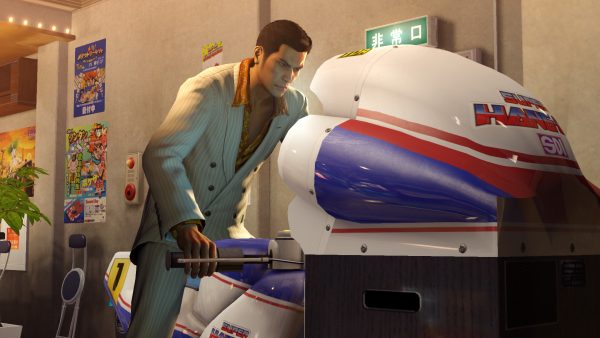 That is not to say the main story is not engaging. Indeed, it goes down intriguing paths and is full of interesting characters, along with a heavier focus on the incredibly fun combat the series is known for. Most plot segments are ways to setup long stretches of beating people up, which is by no means a complaint. The combo-based combat system focuses on using multiple fighting styles and environmental weapons to take down waves of enemies in a delightfully over the top martial arts movie fashion. The first time you break a motorcycle over an adversary, you will really appreciate the depth of the combat.

Narratively, however, the game stumbles in a few ways. Pacing can be awkward, as some plot segments involve going from point to point on the map for cutscenes, or visiting several shops to purchase specific items for use in a fetch quest. Since there are at least encounters to be had as you explore, the annoyance is offset by the opportunity to punch people in the face for copious amounts of cash. Worse than that, is how often the game relies on huge exposition dumps. You will find yourself having drinks with an NPC, and there you will get a plethora of character background and motivation handed to you in classic “As you Know” style.

Cutscenes are a genuinely mixed bag, as they are presented in several different ways. Some of them are pre-rendered scenes, some in-engine, and others still are presented in a motion-comic style. These will be mixed together within the same cutscene segment, and it can be rather jarring, but effective when pulled off seamlessly. Most of the time, these are just jarring. 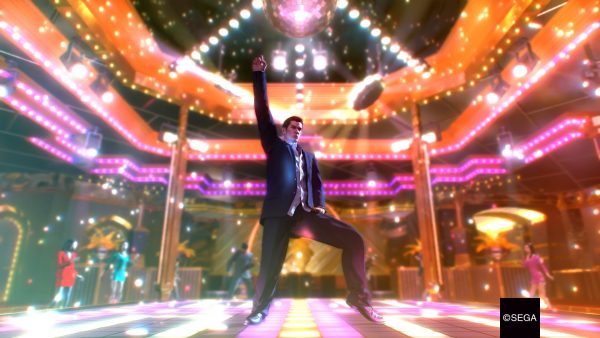 The game is a visual treat, with bright neon signage everywhere, and excellent attention to detail. Kamurocho has enough filth in its alleys and side streets to really drive home how much of a façade the neon glow really is, and the characters are highly expressive in their animations, even if most of their emotions range from anger to violence. The animations are great, which leads to some outright brutal moments in combat – Majima in particular has some really satisfying bat manoeuvres.

In addition to looking good, it sounds great. This is of course most evident in the dancing and karaoke minigames, which are made fun through the catchy pop tunes. The soundtrack features a variety of musical styles, befitting the 80s setting, including some phenomenal generic rock for the intro cinematic. The sound design also enhances the combat, with both satisfying crunches and cracks as you administer liberal applications of violence to your foes, and over the top sound effects as you power up and switch styles.

It is important to know that Yakuza 0 does deal with some difficult and uncomfortable content. The way hostesses are treated in the nightclubs could definitely be off-putting or upsetting, going from verbal abuse to inappropriate touching. In addition, there are discussions and depictions of torture, including the before and after of an eye removal. The actual removal is offscreen, as is the removal of a finger from a major NPC early on. Also worth noting, some of the side stories discuss and threaten the exploitation of sex workers and minors (sometimes both). 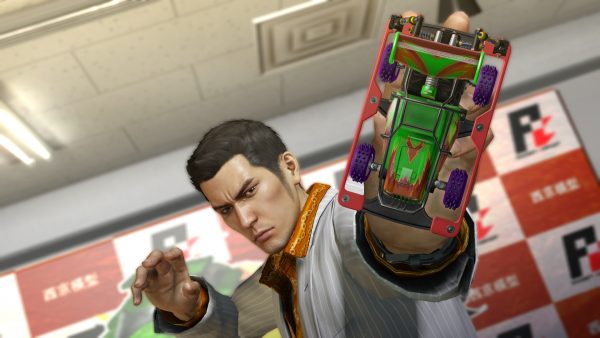 Yakuza 0 is an excellent game that treads uncomfortable water. It carries itself well overall, though the bombastic presentation can be at odds with some of the upsetting aspects. If you are able and willing to see these depictions and allusions in a game then there’s a lot of entertainment to be had. When the game focuses on over the top martial arts and lets its goofy side shine is when it’s at its best. Just be prepared for some serious tonal shifts.

John Bridgman is a Canadian games journalist who has freelanced for various publications, and a host of the Downloadable Concept podcast – http://dlc.invincible.ink  is our URL. He can be found on Twitter @JEBWrenc. SEGA of America provided BrokenJoysticks a digital copy of Yakuza 0 for review ahead of the game’s release.