Id Software, developers of this year’s breakout shooter DOOM and the upcoming Quake Champions, are looking to bring aboard an expert on in-game monetization according to a recent job posting found online. While it is highly improbable that this will have any impact on DOOM’s existing player base it could have ramifications for the mostly still under wraps Quake project that is supposed to have a larger presence / possible release next year.

The responsibilities of the “Monetization Designer” according to the job posting include “develop[ing] and manag[ing] the economy/monetization components for competitive multiplayer” as well as “balancing free vs. paid currency in the game economy” and that the successful candidate will “collaborate with the design team, analytics group, marketing and tech department”. It looks like whoever lands this position will have a lot of influence regarding a number of different facets of whatever project their involved with.

So, let’s talk about Quake Championship for a moment. While the game may have been in development for sometime it wasn’t unveiled until this past E3 and even then our in-game look was only through the lens of a highly edited cinematic trailer. QuakeCon 2016 brought some more news, screenshots and Twitch streams from pro gamers. The fact that Bethesda has not committed to disclosing a monetization method for the game and that as of that event developers stated that they hadn’t ruled out free to play means that there is still a possibility that this position is related to Quake Champions. How exactly a team based, role dependent FPS title would work is a bit of a mystery. Would they go the Paragon route and make all of the characters free but lock away skins and other items? Perhaps a lower priced “buy to play” model with additional maps and characters as in-game purchases? Maybe id will follow in Valve’s footsteps and give everyone hats! 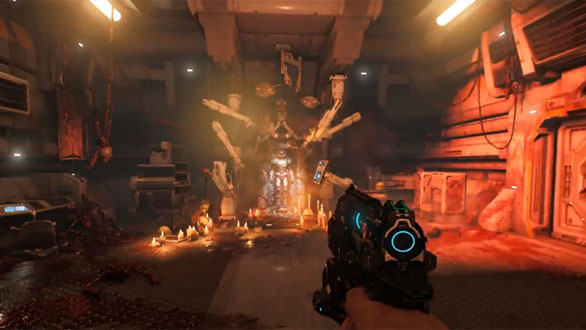 This brings me to DOOM, Bethesda’s critical darling was lauded for its strong single-player campaign and excellent world building but the multiplayer left something to be desired. In the months after release Bethesda released 3 DLC packs that come packed with new weapons, mods and maps as well as releasing several free updates to the game that have expanded upon the Snap Map technology, allowing creators to produce small campaign like experiences. It is highly unlikely that DOOM will see further post-release support as Bethesda already positioned “Bloodfall” as the game’s last premium DLC. To make the multiplayer free-to-play is like reanimating the dead, even if it moves around the heart that beats underneath is still cold and lifeless. With DOOM Multiplayer only averaging 2000 – 2,500 average concurrent players on PC there doesn’t seem to be much hope of reviving this multiplayer blood bath.
Quake Champions is expected to have an open beta sometime next year.