Sometimes games that look too cute can be overlooked and dismissed as just a kids game. These games can be lacking in a real challenge or have watered down gameplay which could be unappealing for a seasoned gamer. And while Gurumin 3D: A Monstrous Adventure is definitely a cute looking game, it’s definitely not one that is without challenge.

Gurumin 3D: A Monstrous Adventure is what you get when you blend a dungeon crawling adventure with overly cute characters. It could be compared that the the “toon” look that entered the Zelda franchise with The Wind Waker. The environments are cute and cartoony while the characters are very simple and have that cel-shaded toon look.

The game is a fun, colourful, and fast-paced Action-RPG from legendary Japanese developer Nihon Falcom and is both a challenge and a joy to play. The game follows Parin, a strong-willed girl sent to live with her grandfather in a small mining town. Parin discovers a friendly group of monsters hidden behind her grandfather’s town in Monster Village. She is quickly drawn into a battle between the monsters and Phantoms, evil fiends that want to destroy the monsters and cover the world in Dark Mist. Learning of the Legendary Drill, a powerful weapon that she alone is fit to wield, Parin embarks on a quest to stop the Phantoms and save Monster Village.

The game, while sometimes feeling a bit disjointed, is very fun to play and feels very much like a 3D platformer at heart.

Gameplay in Gurumin 3D: A Monstrous Adventure is broken down into levels on a world map, much like you’d find in the later Super Mario Bros. games. Your hometown is the base for the game, as is the attached monster village, with your heroine Parin venturing out into the various areas to look for her missing friends or items. 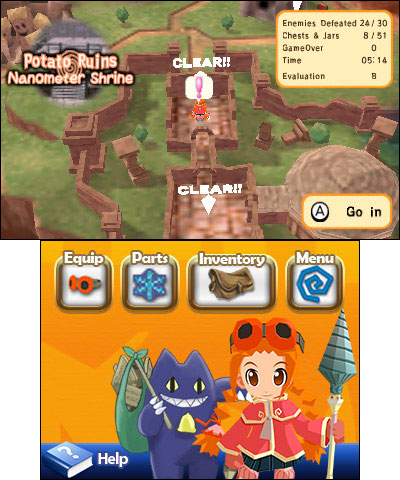 The platforming is very easy to control and Parin responds quite well, hacking and slashing with ease. In fact not only can she hack into the enemies scattered around the levels, but she can smash virtually every item in the environments. Trees, rocks, torches, and just about everything else can be smashed, which pops out coins she can use in town. Some of the larger items requires that you hold down the button to charge up the drill, but most things can be destroyed. There are also plenty of secret areas to be found by breaking through walls with a quick charge of the drill.

Levels are based on the exploration aspect of the game as well, with some levels needing you to pay attention to find walls that can be smashed. While some of them only reveal a small crevice and some coinage, others are pivotal discoveries to the progression of the levels. If you’re ever stuck in a seemingly pointless level, look around at the walls for cracks. That’s likely where you’ll need to focus your attention.

The game isn’t just about beating levels though as there is an overall larger plot at play. You will also have to contend with the Phantoms in the levels as well, which are a little tougher foes to face. Some of them have shields and armour, making them more of a challenge. But the bigger the challenge the bigger the reward as they drop junk for you to collect. This junk can be used in town for a special purpose, but more on that later.

And what would an adventure game be without boss battles? Yeah, this may look like just a cutesy kids game but this cat’s got some teeth. There are a variety of bosses to battle in the game, which each require different techniques to take down.

In the game Parin can also purchase different hats, each with different effects and abilities. Abilities range from things like reducing damage, giving you resistance to elements like water or gas, as well as boosting the amount of money you earn from drops. And keeping with the style of the game they are all cute on your protagonist. Each of the hats can also be upgraded multiple times to either boost or add abilities to them. This is where the junk comes in. Upgrading these hats doesn’t require a dime, but does cost an increasing quantity of junk to do. 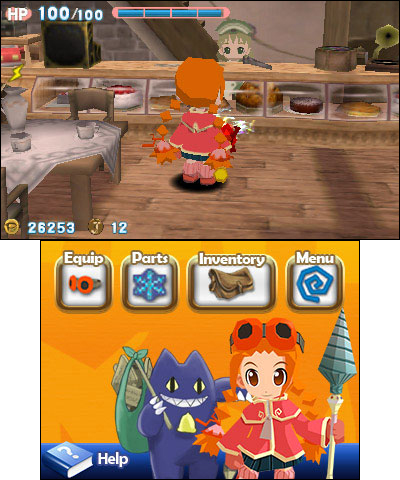 And as with any game in the genre upgrading Parin’s weapons and health are staples that continue in Gurumin 3D: A Monstrous Adventure.

I hate to be nitpicky with a game that I really enjoy but there were a few minor things that I didn’t like about the game. The game has very limited options, with no ability to play with the music or sound levels. There also isn’t any way to sort the inventory with all of the items you acquire going into a single list. You also can’t sell any items that you collect, though everything seems to have a use so I guess that’s not a big deal.

Also the pacing of the cutscenes felt a bit stretched with unnatural and slow pauses in the dialogue, though it was great that they were fully voiced.

Gurumin 3D: A Monstrous Adventure‘s real-time combat, colourful characters and environments make this game one that is so fun to play. And with multiple difficulty levels it can be forgiving for younger players or downright tricky for seasoned veterans. And with eight save slots there is enough room for everyone to have a crack at it. Gurumin is great fun.