You know, I’m just not sold on the benefits of My Nintendo. Sure there are some nice little things here and there, but on a whole I’m having a lot of trouble spending my coins. Not only on platinum and Miitomo coins, but also the gold coins. The rewards that you get for cashing in those coins really doesn’t seem worth it.

This is coming as someone who is a huge Nintendo fan. I’m all about Nintendo and if you’ve ever seen my posts here or anywhere else it’s quite apparent. But is there anything new and exciting from My Nintendo that peaks my interest? Sadly, no.

What do you want most from Nintendo’s rewards system? If you said new, unique, or cool stuff then we’re in agreement.

In the very early on Nintendo had several exclusive My Nintendo 3DS themes which could be redeemed using platinum coins, which are pretty easy to earn. Not only can you earn platinum coins from logging into the eShop, MiiVerse, and My Nintendo on a weekly basis, but also by actively using Nintendo’s Miitomo mobile app. I downloaded a few themes and even the exclusive game My Nintendo Picross: The Legend of Zelda: Twilight Princess.

But since then there has only been a small number of new releases, of which there were only a few themes.

The emphasis for the rest of the coins, including primarily gold coins, is redemptions for discounts and not full games.

The above chart is how many coins you earn from purchasing items digitally from the Nintendo eShop. It also should be noted that it doesn’t appear that, unlikely the previous Club Nintendo program, physical purchases qualify. Below you can take a look at the new additions to My Nintendo, which are valid for three months. These offers end on December 1st, 2016. 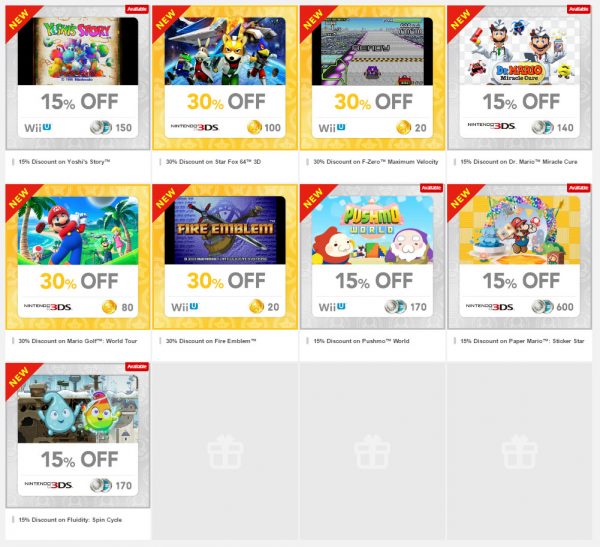 While these are a great selection of Nintendo games to choose from, the coin redemption seem awfully steep. Let’s look at Mario Golf: World Tour for example.

To redeem for 30% off you’ll need to trade in 80 gold coins. In order to earn these coins you’ll need to spend just under $100 CAD in the eShop. Mario Golf: World Tour retails in the Nintendo eShop for $34.99 CAD so saving 30% off will save you about $10.49 off the price. So you can get the game for $24.49 by redeeming gold coins. This doesn’t seem like too bad of a deal, if you are someone who spends a lot in the eShop.

As someone who it a little more cautious with my purchases it doesn’t seem worth my while to spend $100 in order to save $10 on a $35 game. Maybe that’s just me.

The worst part about this is that if you’re someone who spends a lot on smaller indie titles then your purchases don’t count towards any coins. Any purchases of less than $7.00 CAD nets you exactly ZERO coins. So you can easily spend more than $100 in the eShop and get no rewards for your purchases.

In this way, the My Nintendo system is broken. If you can earn 10 coins for $7.00 then there should also be an option to earn 5 coins for a purchase of $2.50. There are a LOT of value priced games in the eShop, and this oversight is lessening their value.