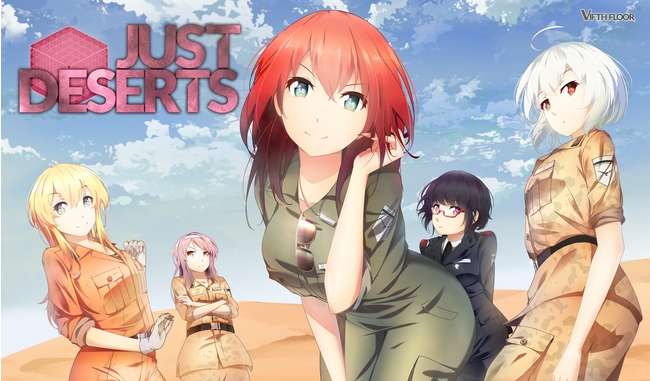 Most of the time with a VN you get a great story, a set of cute characters that fit in to a single archetype. Usually you will have the various dere girls, the cute nerd, and at least one more type, sometimes shes the clumsy one, sometimes shes the super hot one. Doesn’t really matter, point is that you get a set of girls, usually introduced right away and yourself the player character who is trying to woo them. This is done via a fairly simple set of interactions that raise how much a girl likes you over time eventually leading to dates, and then the end game. Just deserts take a much less direct approach to this, for you see aliens have invaded.

The game begins with you pulled on to an unknown military base, shown to the bases commander Cornelia (who has pink hair) and briefed out on the fact that the facility you are at is in fact a secret forward operating base that’s fighting aliens. Not your standard opening to a VN, but I guess its more plausible then finding two cat girls in a box (if you don’t get that go play Nekopara). The rest of the game features 4 other girls, with hair colored Blonde(Ceceile), Black(yumi), White(Eve), and red (Jennifer) plus the commander we already met. You will spend most of the game getting small quests for these girls, and fighting turn based battles against aliens. 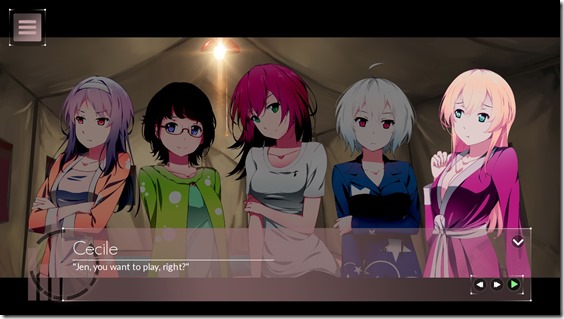 Because this is a VN im going to be talking a lot about art, and voices, and not as much about the game part itself. If you really want a gaming experience I cannot in good conscious recommend that you play a VN. Go play Overwatch or something instead. That out of the way the V part of this VN is really stellar. It features a soft art style that’s full 2D instead of the sudo 3D that many VN’s opt for.  There is no character movement in the sprites so don’t expect something like the boobs slider you get in Neko Para to make an appearance.  Backgrounds are beautifully penned, but they really do look like paintings because they are static. Everything has a soft glow that makes it sort of resemble an oil painting which feels a bit out of place in a VN about alien invasion.

The girls themselves all have different body types and styles. Each on can be dressed in a variety of different outfits that are purchasable with in game money.  You can have each on wear these clothes in various poses which you also purchase. The games CG screens (a must in any VN) are well drawn, but basic, this is also an all ages VN so don’t expect any nudity here. The game is voiced but not fully, instead you get kind of bits and pieces of what the characters are saying, which is a nice feature but id almost prefer the fully voiced Japanese standard that comes with most VN’s. 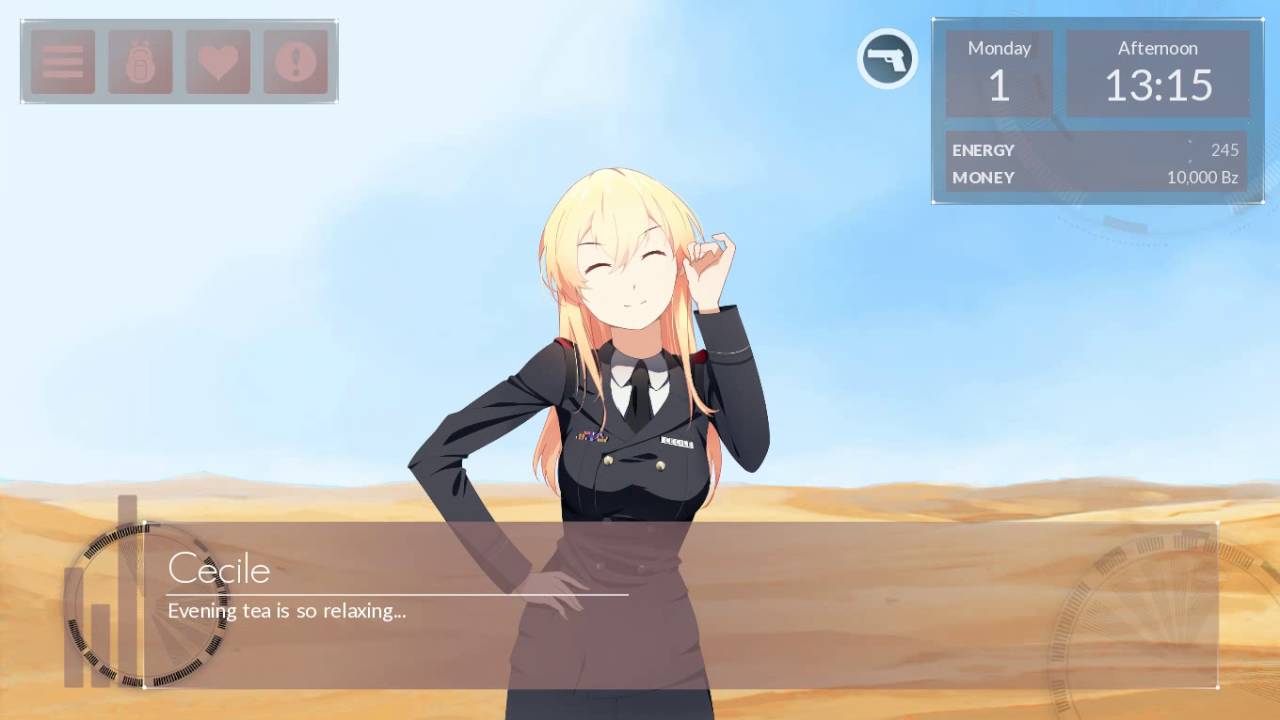 I really like the games flat UI its one the best I have ever played.

The story is the most basic of VN stories, your dropped in to a (future) harem of girls as the clueless MC, and expected to start doing things to woo these girls. Story is honestly the worst aspect of this otherwise fun VN. I know that sounds sort of backwards since the second letter literally stands for novel, but I really don’t feel like not having a story takes much away here. Bascially you’re the typical super MC who can save the world, but also there are some girls you have to woo, it’s shallow on the level of Honey pop but with less matching and more shooting aliens. As to the earlier mentioned aliens, we never find out more about them than they are invading. They simply serve as faceless antagonists to keep the game moving. The most plot we really get comes at the end of our month of time (yes this is a time limited game) where we go to the alien ship to destroy it. 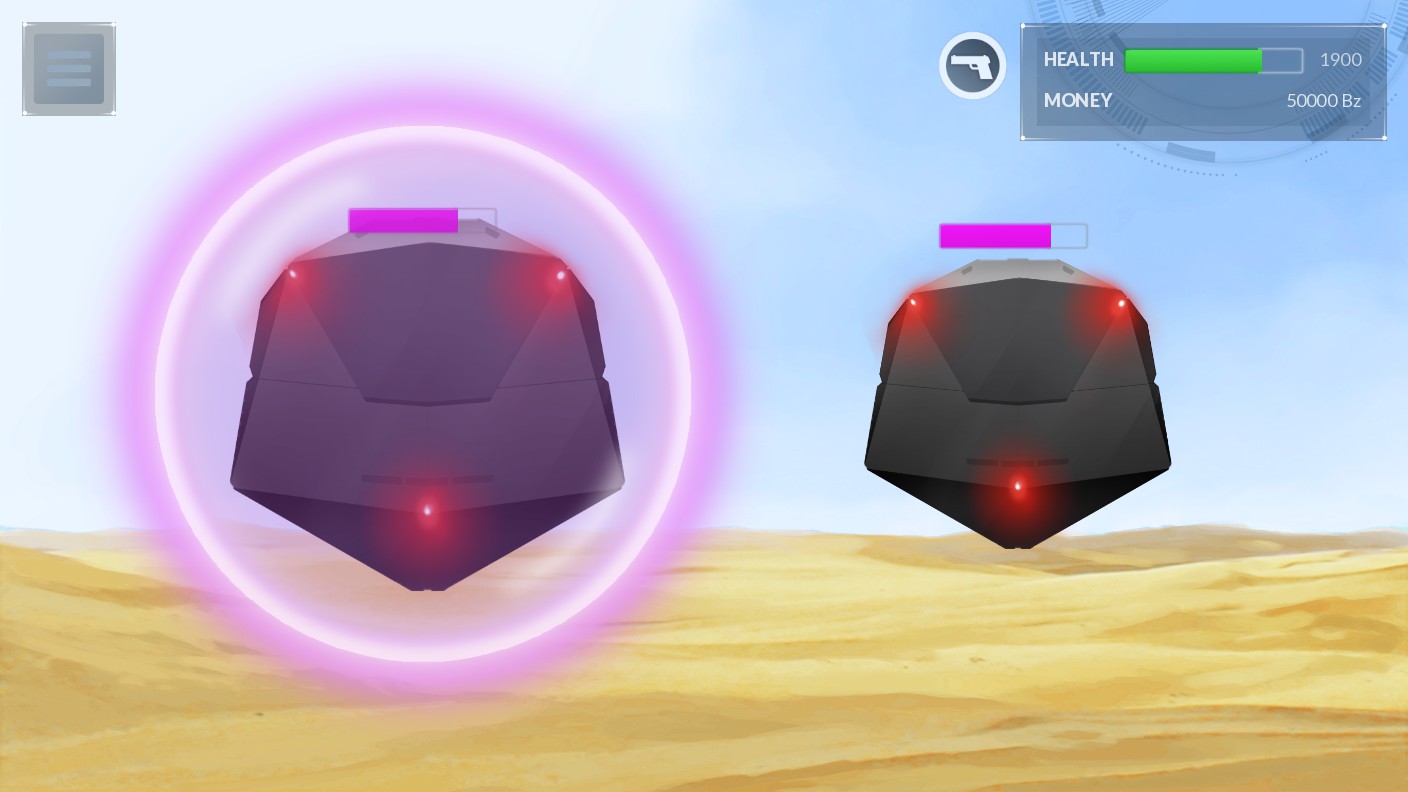 But you didn’t really come here for the story did you? I mean I didn’t, I saw cute girls and was like lets do that! Each of the 5 girls featured has a purpose, a skill if you will in the upcoming battle with the alien menace. The relationship aspect of this game is that the more you woo a girl, the better her weapons to fight the aliens will get.  In each play through you will have 30 days to get to know each girl as much as possible , unlock all of their weapons, and go attack the alien spaceship. The game is pretty kind about those days, and there are only a few planned events during the 30 day period.

The scenes in between the combat are nice enough, you get to interact with the various girls, who slide on and off screen in a cut out sprite style. Since you have 5 different characters to woo, you can expect plenty of time will be spent choosing which one you want to “power up”. These are basically the games different routes, and you won’t be able to do all 5 in one go, so there is at least some replayability here. 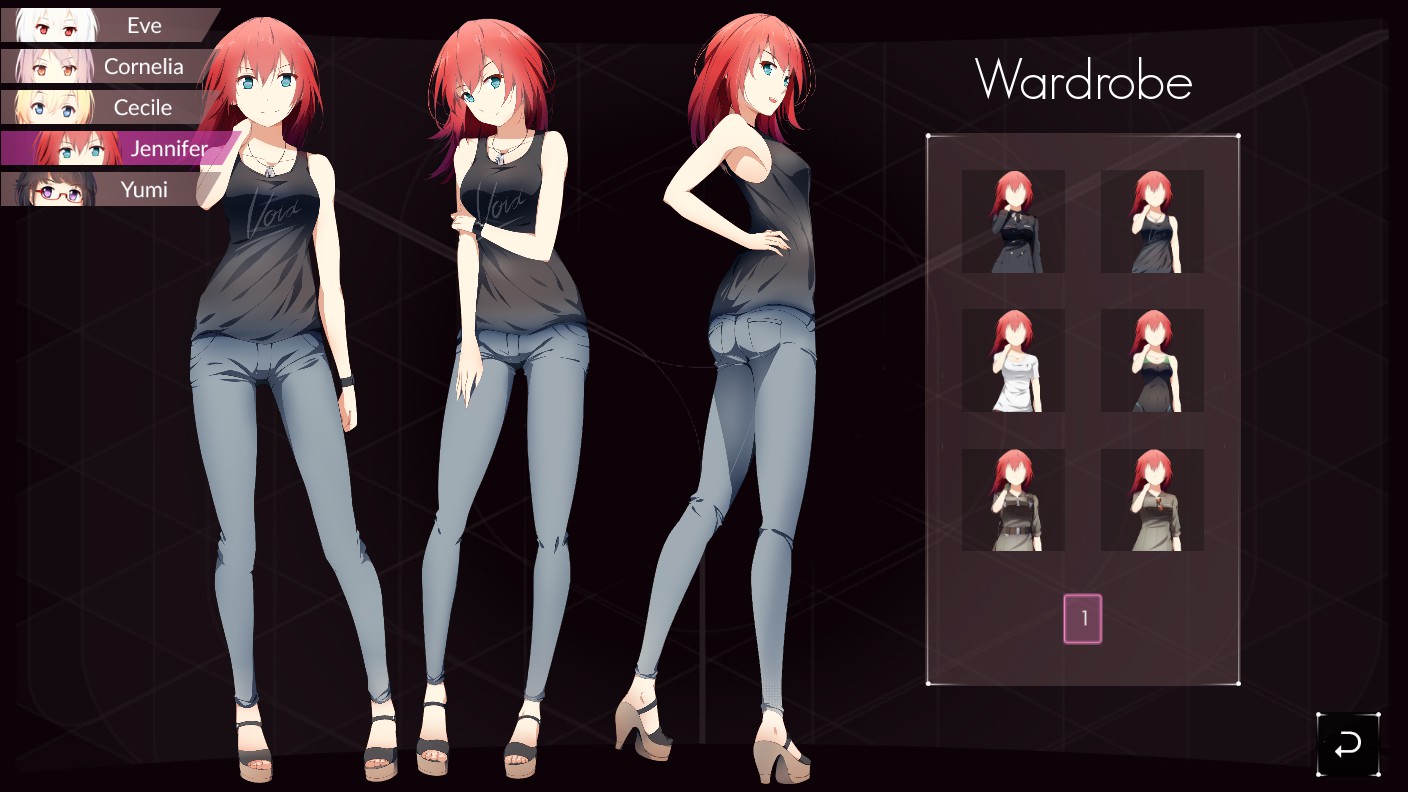 Your time is most difficult resource to manage here. Training or wooing or fighting all take time. You also have very limited money, and will need to get more to buy gifts for the girls to get them to like you better.  I don’t have much nice to say about the combat in this game, its pretty basic. I never felt like I was going to lose up until the last boss which took a major curve on difficulty in a scary way.

The battle system it self is turn based and most resembles something like an early JRPG. You attack, use items, or special abilities. Enemies are only encountered while on patrol , and on each patrol you can bring one girl, who can also use a special ability. , you can buy new weapons (which all have limited use) and armor, as well as training to increase stats and to increase attack or survivability. This is basically all it is in a nutshell, with just a few more mechanics that I haven’t touched on.

Combat suffer from being almost too simple, but really it’s a VN im here for the cute, not the combat, so I cant fault the game too much. I do have one complaint, enemy diversity is basically 0. Here is the enemy list: a cube,  a fire cube, an acid cube, a grass cube, a hexagon, a diamond, and a sun. That’s it. The other “game” part of this is of course the dating sim, which is pretty good actually. The UI is fantastic, I really liked how slick and modern it looked.  Just like most VN’s you will be spending your time here buying things for girls, wooing girls, giving them things, and talking to them. Each thing you do will earn you love points, and as those grow you will eventually go on a date.  After you complete a set number of dates, you fall in love, and well win.

Overall I really enjoyed Just Deserts. It mixes up the usual VN formula of just dates with just enough combat. The combat is boring after a while sure, but its still way better than it would be if you just didnt have any at all. With the tiny price tag its totally worth it.