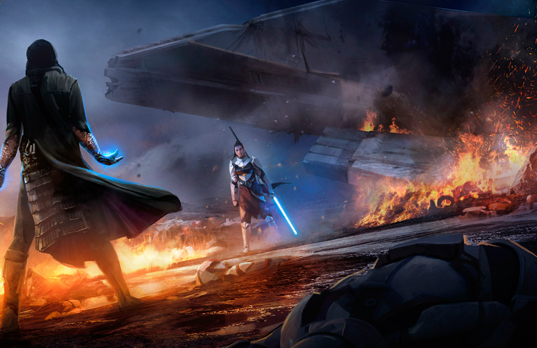 Remember Star Wars the Old Republic? The now free to play BioWare MMO that was the successor to Knights of the Old Republic, but lacked all of its charm, story and fun? Well, I do. That game actually soured me on playing any more Star Wars games. I havent touched any since, so poorly handled was the game. Well, now BioWare wants you to come back, and play a little more. Announcing today their new expansion for the already free to play game, which will be called.

Knights of the Eternal Throne

There you go. This is a five year old game people. Im surprised I even saw this story on the news wire today at all. Though ToR still has a small dedicated fan group. It is by no means a successful MMO. What started out as a paid monthly wow like game, eventually devolved in to the worst free to play garbage that existed.

Following on from the story-driven Knights of the Fallen Empire, the latest entry will feature more of BioWare’s trademark cinematic storytelling, as well as exciting new game features. So I expect a lot of running around doing things, and talking to people. Can we be done with story driven MMO’s yet?

Right now all you can really do is sign up at the website and see a fancy animation. Go here to do that if for some reason you are a serious Star Wars fan, or still playing this game.

When KOTET does arrive, it will align with The Old Republic’s fifth anniversary which EA and Bioware have marked with a celebratory blog post from director of design James Ohlen; an infographic which, among other things, notes players have sunk an impressive 1.5 million hours into SW:TOR since 2011; a handy collection of the game’s trailers; and this video.

So good luck out there, hopefully this expansion doesn’t suck as much as the last one did. Knights of the Eternal Throne is expected to launch in “Fall 2016”.