2011 was a big year for a lot of people. Many huge events happened that year, so it can be forgiven if you didn’t notice Flying Wild Hog publishing their love story to old school atmospheric cyber punk shooters, which they called Hard Reset. The game was a love story to the old slower paced atmospheric shooter. No regenerating health, a boat load of weapons, and a complex story that involves tons of cut scenes in a comic book style of narrative. Now they are back with Hard Reset Redux.

This game has a story but if you asked me what it was I wouldn’t be able to tell you, not because the story wasn’t good, but because I was way too busy killing robots with the games insane array of weapons to pay attention to it. I am reasonably sure most gamers could entirely skip the cut scenes (and no doubt many will) and still derive the same amount of intense enjoyment that I did from blasting robots and giant bosses. 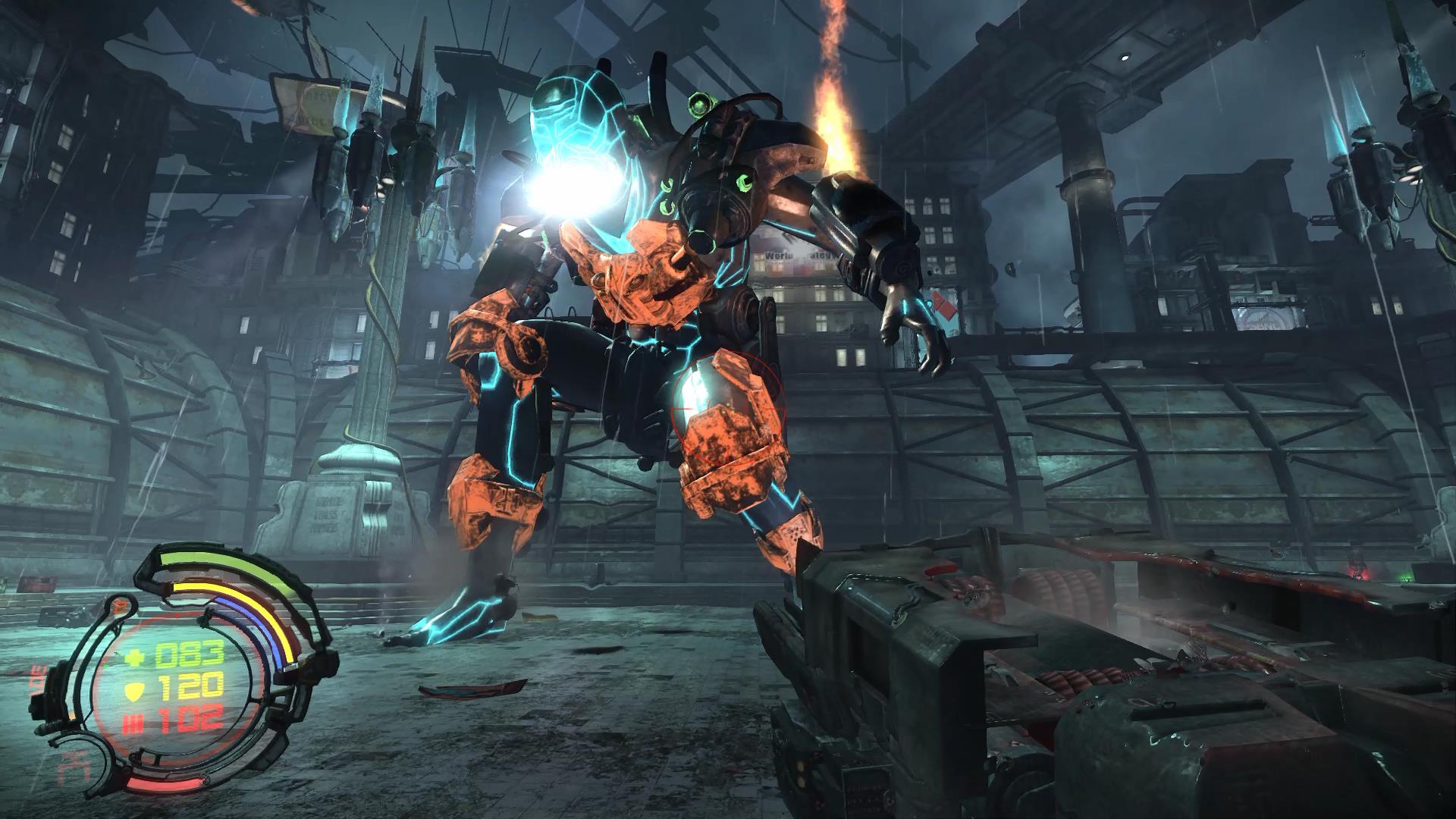 Look at the size of this one!

If you have ever played  Painkiller, or you are familiar with the work of people can fly (bullet storm), then you can expect a lot more of the same out of this game. Its basically a simple formula played out well in an expansive world that we really don’t get to know much about. Hordes of enemies swarm our protagonist who has but a load of guns to beat them back with. These guns are fantastically unique, and none of them really just “shoot bullets” but instead might shot lightning, homing rockets, or even create a mine that site on the ground waiting for an enemy to come.

What you will not find in this game, is cover, regenerating health, or any of the other trappings of most modern shooters. This is a classic FPS, one that had it come out in the late 90s would have been called a Doom clone. You are big, strong and fast, you have many weapons, and must kill many enemies. Are you getting the idea yet? That is what this game is, it’s a classic scifi romp through the long hallways of shooter history. At a time like this that’s full of generic yearly installments off the same set of games, this type of game play is so refreshing.

Enemies in this game are vicious, one of the biggest improvements from classic to redux is enemy AI, placement, and types. Players of the original hard reset redux will remember enemies chasing them across entire levels. That still happens. I can’t count the number of times I retreated desperately looking for a health pick, running back towards the levels start. Only to take a shot in the back from a pursuing enemy. AI is restless but not plagued by the problems it had in Hard Reset. Most of which were simple clumping issues. Often I would run in to a room of 20 or 30 enemies and simply be hard stuck, having to kite away and try to pull one or two at a time to kill them.  This has mostly been fixed in the new game. I no longer feel like I have to pull enemies, kiting is still very necessary, but that’s just the kind of game this is. 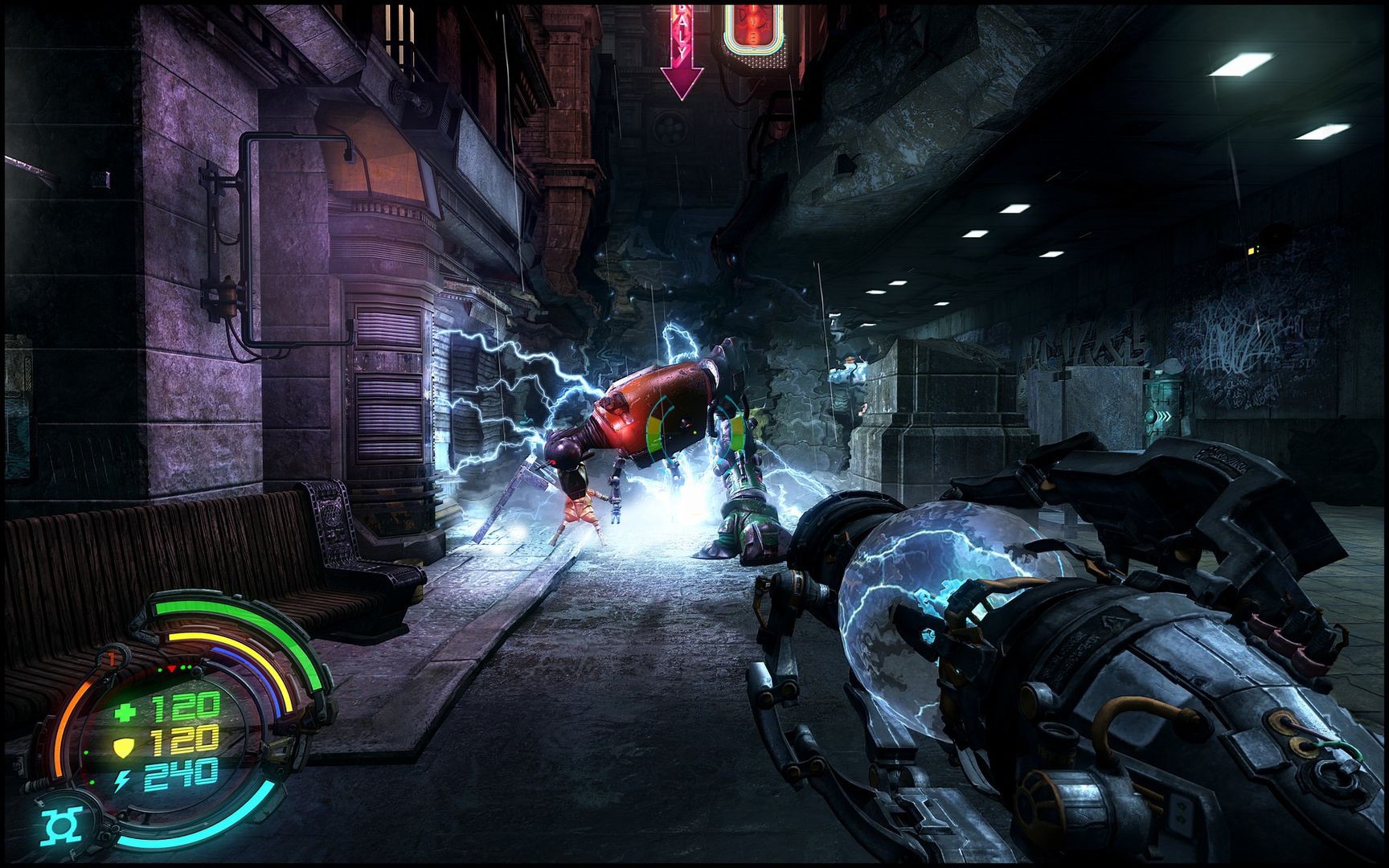 You can shoot Chain Lightning from the NRG

Most of your time is going to be spent going back and forth and shooting. That being said I still died. Like a lot. Not Dark Souls level, but way more than most FPS games. I consider myself to be pretty good at FPS games. Hard Reset Redux made me reconsider that notion.

Though many players may think at the start they get only two weapons, the game actually provides a huge diversity of weapons via the “modes” these two guns can change in to. The CLN (read like clean) and NRG (energy) are the two bases of your arsenal. On top of this you get sort of like mods, where you upgrade the guns to shoot grenades, rockets, rail gun shots, chain lightning, or shields. There is a dizzying diversity of different things your two base guns can do. The modes for the guns are able to be changed on the fly, so there is really no worry of being locked in to one weapon. I found myself mostly using the rail gun feature of the NRG weapon and the rocket launching capabilities of the CLN.

This ended up being my play style but some players may opt for better or more configurations or just to try different things sometimes to kill larger swarms. Redux also adds a super powerful melee attack in the form of a “cyber katana”. I found it next to useless, but some players may appreciate the classic melee style combat system of slash, slash, slash. It is a really cool weapon, but I feel its totally unneeded.

Upgrades to the gun are unlocked with the games in game currency “nano” which you get for killing stuff. Dead enemies drop a wealth of items, which shine with pretty particle effects. Drops are quite abundant, and I really appreciate that in each of the games levels there is at least one Doom style secret room, usually full of armor and nano. There are no shortages of money sinks in this game either. Frequently you will encounter terminals that offer you upgrades, to your gun, health, shield, and armor.

The bulk of the game can’t be played without grabbing some of these upgrades so killing the hordes of enemies has a real tangible feel to it. Each upgrade makes you a little bit stronger. While its not that satisfying major power boost like you would get with say, Diablo III, it still feels good.

Boss fights are major productions, like Zelda but with guns. I was actually able to capture a whole boss fight at PAX east, and you can see that video here. I didn’t get to play that boss fight but what I got from watching it was the sense of scale, the player is this lone warrior left, fighting the huge mega army of almost never ed

The major attractor here is going to be the old school run and gun gameplay. If you were a fan of say Doom, or Star Wars Dark Forces, this game is going to feel like home. Its easy to settle in here play a level or two and forget that its 2016, where most shooters have to have regenerating health, and a classes you select from the start, and multiplayer.

I often found myself feeling giddy after each fight, as I would run around collecting the glowing leavings on my just finished carnage. The Redux version of the game has a brand new graphics engine, and it shows. Textures are tighter, lighting is a bit toned down (it is after all cyber punk) and the AI is much improved.

Slow movement form the original redux has been removed, and the player now zips around a rate somewhere between Master Chief and Doom Guy. Players now move faster than the robot hordes, and so its easier to kite enemies. There is also the silly cyber katana to use if you get in close.

So if your looking for an old school shooter, that feels right out of blade runner, has a cool diversity of weapons, huge boss fights, and an awesome world, Hard Rest Redux is probably for you. If you were a fan of Pain Killer or Serious Sam, this is the type of game you will love. These games have become few and far between with the prominent style of shooter switched over to the more modern cover based or fast COD like shooter, so its refreshing to see a AAA effort at an older style. I think this game is worth playing even if you played the first version. That’s just how much difference the upgrades have made. Just be prepared for a few frustrating moments of crap I died again, and some massive hang ups at boss fights!