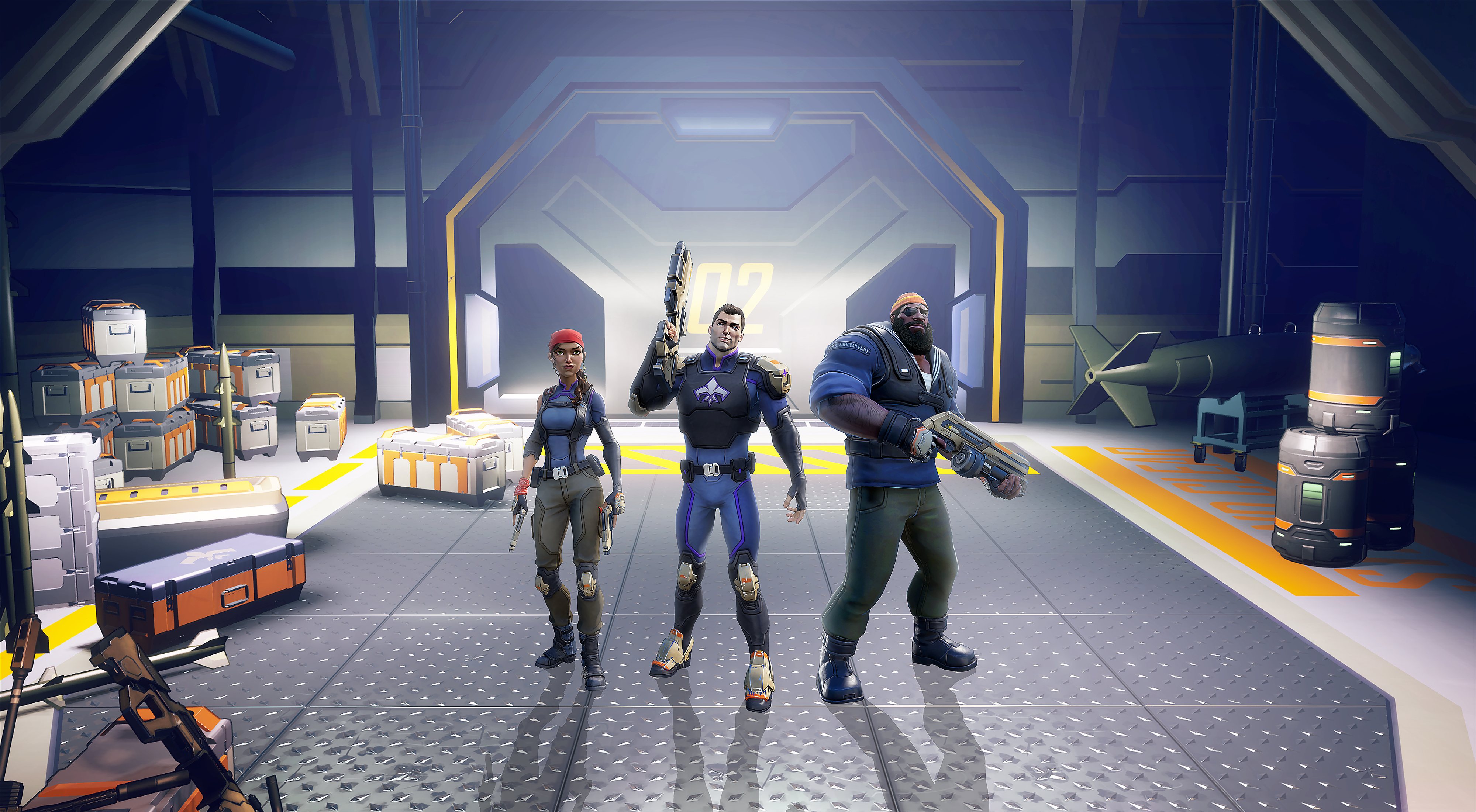 One of the things I absolutely could not miss this E3 was the new game from Volition and Deep Silver. makers of the Saints Row franchise. which I absolutely love. This new game is called Agents of Mayhem. Featuring a three character team – each with unique abilities from a team created to oppose the evil masterminds of the world. During the short presentation, we were given prior to the demo we were told to think of the playable hero’s more as rogues, your Han Solo or Dexter Morgan than a true good superhero. This really comes through in the game, as we started out by having a developer telling us that if we used out special ability it would “detonate” any pedestrians that we walked past. Ped-splosion it was called by him. He was not kidding, I activated the ability and purple lightning started emanating from me started a 3 second counter over anyone I walked near. When that timer reached 0, BOOM, no more pedestrians. They literally exploded into tiny little bits of meat all over the place. That single bit of gameplay from the demo would color my entire experience. The whole demo was just fun. Its really hard to describe fun, but imagine basically feeling like a superhero (a stated objective of the game) but one who doesn’t worry about damage to the local area of pedestrians. 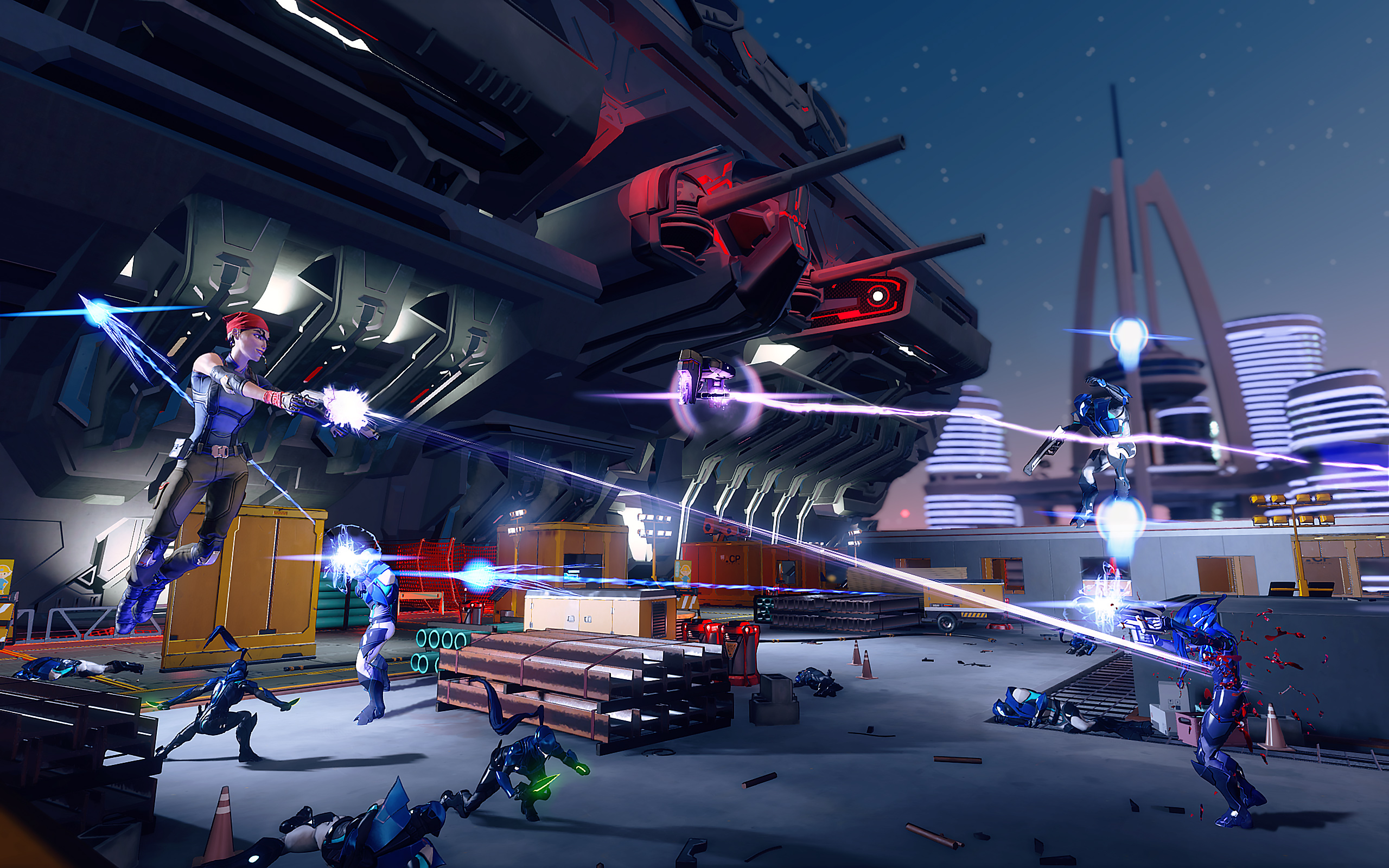 that floating thing is dual pistol girls special move, its controlled by the AI and does MASSIVE damage

To get into the actual game itself, you play as a team of three “agents” which you can choose from a stable of 12. I chose three of the most basic, a large man with a shotgun and a harpoon (really? a harpoon, I swear it worked just fine) a tiny girl who had two fast shooting pistols that worked on a cooldown system, and a Hollywood reality star who fast-talked through his lines spent as much time talking as shooting. Each of these team members had a unique weapon and a unique ability called their agent ability. My favorite of these abilities I can only call crotch rocket, which was on the Hollywood reality star character. He sort of stops does a pelvic thrust and it just shoots out a missile in front of you. This is basically the whole game. It is all like this and it is amazing. 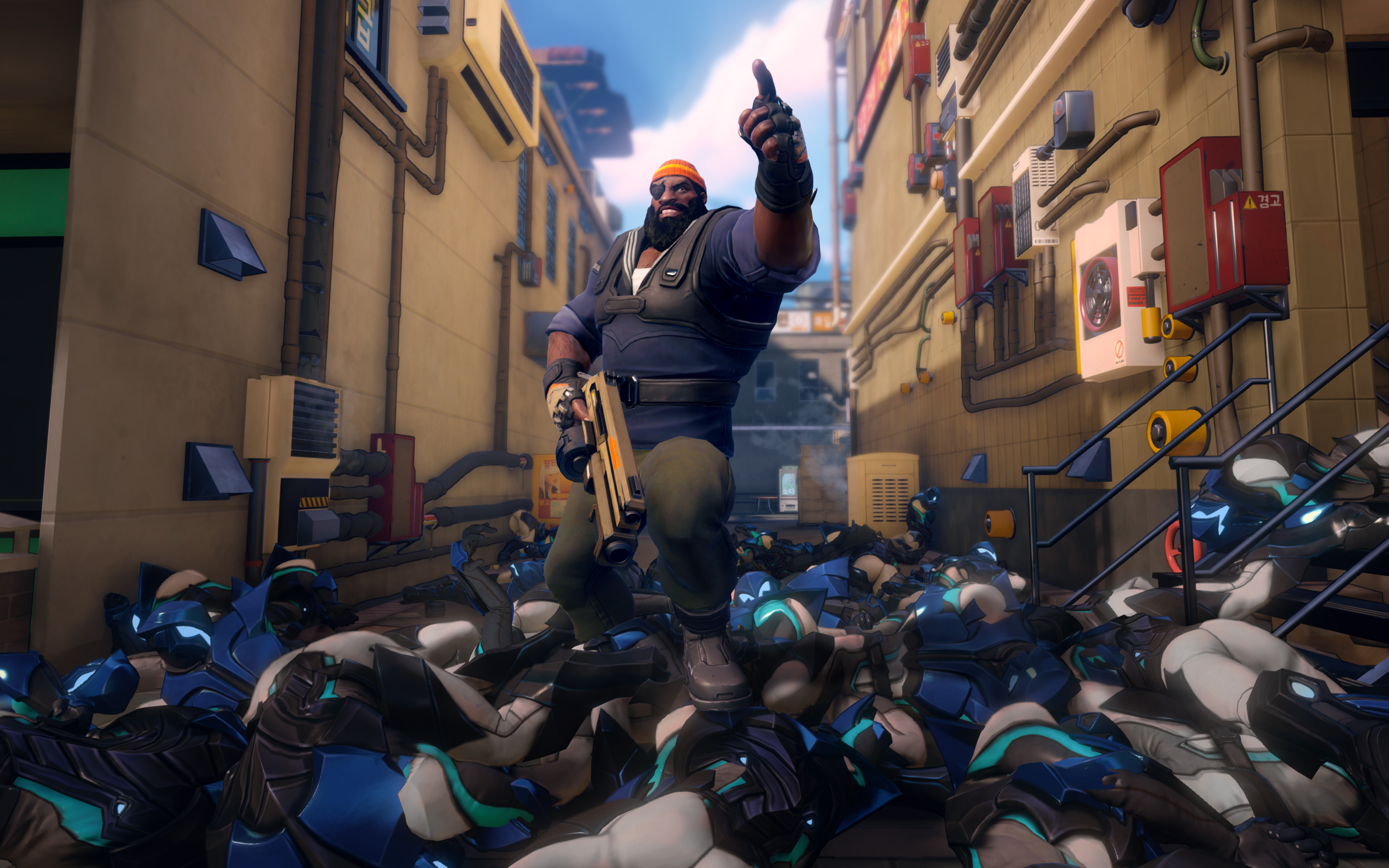 The shotgun guy is large.

Mechanics wise, each hero has a main weapon that is their primary damage, for Hollywood this was a rifle, for the smaller girl two pistols, and the the large man a shotgun, each also has a powerful melee attack which is great when things get in real trouble. The vast majority of the time I didn’t feel like I was in trouble, but there were a couple of moments when my shield did get low, and a large group of enemies was nearby so I resorted to the meele, and I must admit it felt a bit more powerful than it probably should have.

The game is going to rely heavily on building combos, and using different heroes- each with their own different roles.  Each hero has a main weapon, an ability, a sort of super move, and a meele, and it mostly feels balanced. I didn’t feel like any one  of the three I played were more powerful, more like each had its own set of abilities and strengths, some were good at AOE, some had a strong main attack weapon, and some were more balance. Each level will be generated in a  procedural manner, so you will be able to play the man levels of the open game world again and again and again while never really getting bored.

The game is very colorfull

Squad choice is going to be important, but the developers also told us that each player will be able to play to their style, even if maybe it’s not the best strategy. What stood out the most about the demo was how much it felt like a game that was designed to be fun. Every little piece just seemed to be about having a good time. The Saints row style of dialog, the lack of respect for basically everything on the screen, it just feels good. The demo had a very arcadey carefree feel that took me back to the end of Saints Row 4 when you had max everything powers wise, or perhaps even Crackdown where you could just bounce around and destroy anything you wanted to.  It’s clear that story will be important, each of the Heroes has their own unique stories and they will all fight against the evil organization that is legion (no not the 4chan people that’s what the enemy organization is called). I am looking forward to seeing what sort of unique power-ups and upgrades each hero can get. Sadly during our short play-through there was not enough time to see the whole upgrade tree, but we did get to see a little bit and I can confirm that there are a lot of upgrades that can upgrade damage, health, shields, and other things.

Even though I only had about 20 minutes with the game, I feel like its going to be one of those games that I get lost in for days at a time just like the other games that take place in the same Saints Row universe.