Duskers recently released after having spent several months in Early Access, luckily they have gone into a full release in good time and with great polish. This game skillfully blends three core elements: rogue like dungeons, tense claustrophobic space horror and puzzles. The game is split into exploration of individual ships, which function as your levels. Each is procedurally generated with a guessed at number of baddies lurking inside. Your job is to use your scrappy fleet of drones to outwit and outmaneuver those enemies to survive and piece together what catastrophe befell the universe. There are plenty of contenders, and you’ll keep a running log of all the front runners through your journeys.

All these planets, and you still can’t land.

The game display looks like a mash up of a retro-futurist mainframe terminal dream and a DOS computer aided design interface. Your connection with the drones is fuzzy, displaying a barely lit outline of the interior of boarded derelicts. This will wash out, scramble and occasionally drop entirely like an a UHF antenna in bad weather. Your much safer off with the overhead map view, where you can see the position and activities of all your drones at once. Controlling them the only way possible: both hands on the keyboard. That’s right, this game has a command line and beside some primitive joystick like navigation of individual drones, it’s the only way you can navigate. 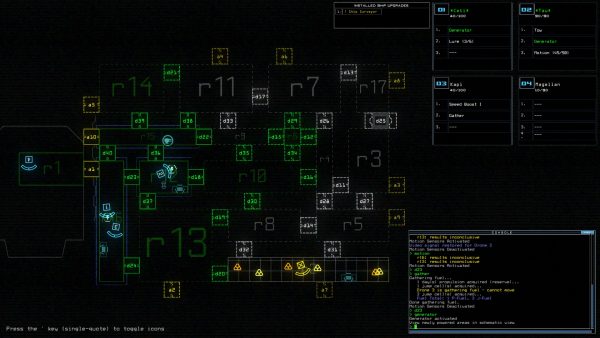 Where you’ll be spending most of your time

And navigate you will, as ‘[na]vigate drone room’ is the essential command to move drones room to room. By stringing together commands on line with semi-colons you can order up whole sequences of events before moving to the next drone and getting it lined up for a day’s work too. Each command can be shortened to the minimum number of letters needed for it to be unique. If you’re into Cisco networking gear, you’ll love it. This game is not entirely unlike a light version of Robot Odyssey, the infamously difficult Robot building game from The Learning Company for old Apple II computers. Except maybe that death is swift, scary and permanent.

The overall ambiance of the game is spot on. Even the soundtrack is simply a collection of your drones clicks and beeps, alongside the background hums of empty spacecraft. Occasionally, you’ll hear the thrumming and screams of angry creatures trapped on board the drifting wrecks. Warning sounds will warn as ancient ships contort and lose integrity or are bombarded with space debris. The game has countless video effects, but they work into the mood instead of against it. Further, they’re mostly in the single-drone mode and won’t affect the overview screen you use most of the time. The simple seeming graphics bely that a full 3D engine is running with particle effects full bore. Despite that, I never ran into a single moment of noticeable latency or lowered frame rates, nor did the game ever crash and break the illusion. The interface is one of sitting at a spaceship control terminal, driven by an actual keyboard making it feel intensely real. It’s as spot on, with a good setup, as playing Elite with a VR headset and customized joysticks. All of this feeds into the slow, horror film pace of play.

I don’t think any other game I’ve played has ever made me jump back from my desk quite as much as this. The levels are twisty and doors or airlocks can fail at random with relatively little warning, so you have to be careful. I found it best to keep most of the doors on a ship closed off, deciding on ‘staging’ rooms to keep myself from losing more than one drone at a time. Once, using the fuzzed out video feed of one disabled drone, I was able to watch an enemy slowly walk into a room I had opened for him. With one multi-part command I closed him off from my disabled drone and was able to space him and tow my precious scout back to the ship. This game revels in something that only computer games can accomplish so well, everyone who plays will walk away with their own narratives.

There is some ‘dialogue’ to the game. Corrupted pieces of occasionally relevant information with which you build a database of the ways in which the universe could have ended. Piecing it together is not unlike going over a conspiracy theorists cork board of delusions and after quite a bit of play, I still have no idea what really happened. I’m not even sure it matters, but at least the self assigned objectives give you something to cling on to, hoping to make it far enough to get an inkling of the catastrophe together. Reading through these is one of the few ‘breather’ moments the game really ever gives you.

Much of the game takes place between levels, as in any survival driven strategy game. Drones have abilities built in, and some number of upgrade parts you have to add for basic functionality. These include generators, sensors of various sorts, weapons and salvaging equipment. You’ll scavenge new parts for your ship and drones from the hulks you board. If you’re lucky you’ll also pick up some fuel and new drones. When you’re really lucky, if you like a ship enough and have safely cleared every area, you can commandeer it for your journey. Their are some basic resources of the world, scrap and fuel. Fuel comes in two parts: propulsive and jump fuel. the former moves you around systems, the latter between them. There are multiple systems in each galaxy & you move between galaxies with jump gates. All of these are scavenged, propulsive fuel is also replenished (by ram scoops?) when moving between systems. Between levels, scrap is used to repair your drones, and their parts. It’s also required for buying new parts from automated trading outposts that have survived past humanity’s end. You’ll find that most repairs are pretty expensive, so keep backup parts and only repair what you have to for survival. For example, I tend to build up an inventory of generators, gathering arms and tow hitches as you can’t properly scavenge without all of them. Much of the game strategy is based on this aspect of never quite having everything you’ll need to survive. You can’t revisit levels, even when you just picked up that one part you needed. As an example: I find myself switching from using stealth, to lures, to room sensors, to motion detectors for detecting hostile movement. These all work, in very different ways, for avoiding being taken out by the hostiles. 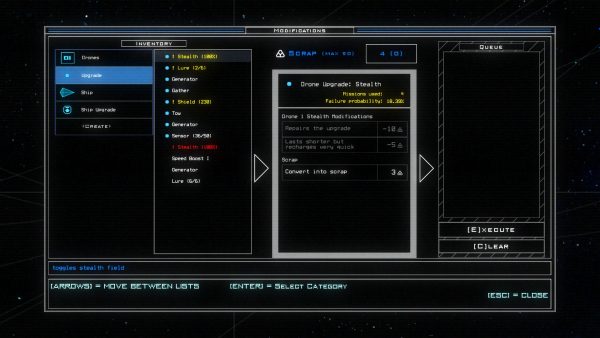 Time to upgrade (or fix) my mods!

Learning the strategy, and calm careful approaches needed for this game will take a few hours. Even then, you may have runs cut short early from an unexpected turn. This game does not take it easy on you with a learning curve, outside of the built-in tutorial. You also must be prepared to occasionally be hit with a total oddball, such as an asteroid or losing video feeds while something important goes on. The precise balance of controllable and uncontrollable events will keep you on the edge of your seat. Many enemies are quite hard to predict at first. For example, swarms aren’t picked up by motion sensors, but by the loud buzzing you can hear on a drone’s feed next to their rooms. They can also move through the vents, so the room you’re in might not be as safe as you thought. Aside from this dangerous exploring, most of the game is run from the ship schematic overview, and by using preprogrammed commands to orchestrate drone movement. You can easily give a drone a whole sequence of rooms to scavenge and tell it when to return home. I do wish their where more commands along the lines of “once the drone has left room A, close its door” but the lightweight shell style of scripting works very well in this game. It is extremely robust and well though out. All considered, this game is extremely tense and on edge. It is rare to find a game that so perfectly conveys as sense of never being safe as this. Even save scumming with a force quit will not work on this game, it’ll simply act as if you had undocked, losing you access to the level you left and any drones you left behind. Those drones are pretty cute, with their little whirring movement and sometimes cutesy names. It makes it all the worse when they inevitably get smashed up. My stockholm syndrome cried out each time.

That said, with practice, patience and a freighter full of luck, you will eventually get into the rhythm of the game. On a good run, this means you’ll be able to explore further and further on each run and really make a bond with your drones and ship before they are reduced to dust.

My recommendation is to try this game, and when you do: BE PARANOID

I played this on my Ubuntu LTS / Steam / NVidia 960 machine with a provided download code and a ‘mechanical’ keyboard.