The SteelSeries Apex M500 mechanical keyboard is a good mechanical keyboard at an excellent price. $99 buys you a full-size backlit mechanical keyboard with Cherry MX red switches. Unfortunately, there aren’t many options: you can have any keyboard you like as long as you like blue blacklighting and Cherry MX red switches. The Cherry MX reds are mechanical key switches with zero tactile feedback and zero audible feedback, unless you count the feeling and sound of the key hitting the end of its travel, or “bottoming out.” There is zero feedback when the keys actuate or make electrical contact and send a signal to your computer that a key was pressed. Because of this, we found ourselves pressing the keys down all the way all of the time just to be sure. Many people prefer this type of key for gaming, especially in first-person shooters, where you aren’t typing as much as holding down keys for precise amounts of time to move in the game. However, it isn’t considered optimal for typing by most people, so if you plan on spending any significant amount of time typing this keyboard might not be the best. 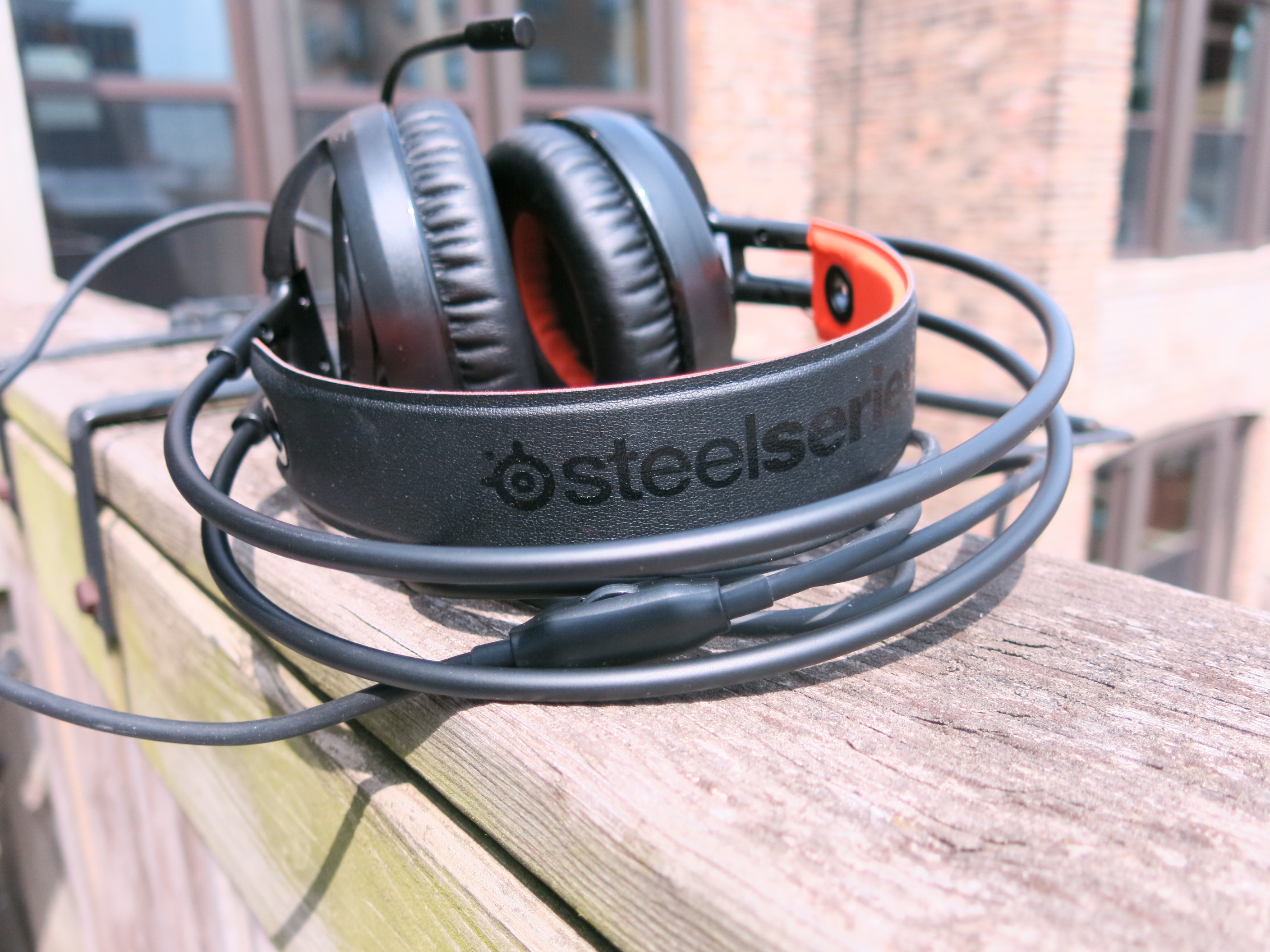 These are some gorgeous headphones

Moving on to the backlighting and physical appearance of the keyboard, there is at least one blue LED beneath each key providing a good looking and even illumination, but they are not individually controllable. Several different levels of illumination (including turning the illumination off completely) are available without the use of SteelSeries’s drivers. The keyboard has a function key (with the SteelSeries logo on it) instead of having a Windows key on the right side of the space bar. There is still a windows key on the left side of the space bar. The function key has several uses: changing the backlight illumination level, accessing “media” functions such as play/pause/next and volume controls, and finally disabling the windows key. Accidentally hitting the Windows key during a heated match of your favorite game can be very frustrating, and SteelSeries have provided a great way of disabling it: pressing the function key and the windows key at the same time. They have also provided a light on the keyboard to confirm that the Windows key is disabled, or remind you why it’s no longer working when you want that functionality back after you win your match.

The keyboard uses a standard 104-key cherry layout and is compatible with custom keycap sets available from other vendors such as WASD keyboards. If you decided to mod your keyboard by fitting it with custom key caps, just remember that it has one Windows key and one function key rather than two Windows keys. The keyboard claims n-key roll-over with drivers, but also provides 12-key roll-over (twice the USB standard 6-key roll-over) without drivers installed. It achieves this by presenting itself as two standard USB keyboards to the operating system. Fortunately, 12-key roll-over is enough for all 10 fingers, plus your nose and one of your toes. 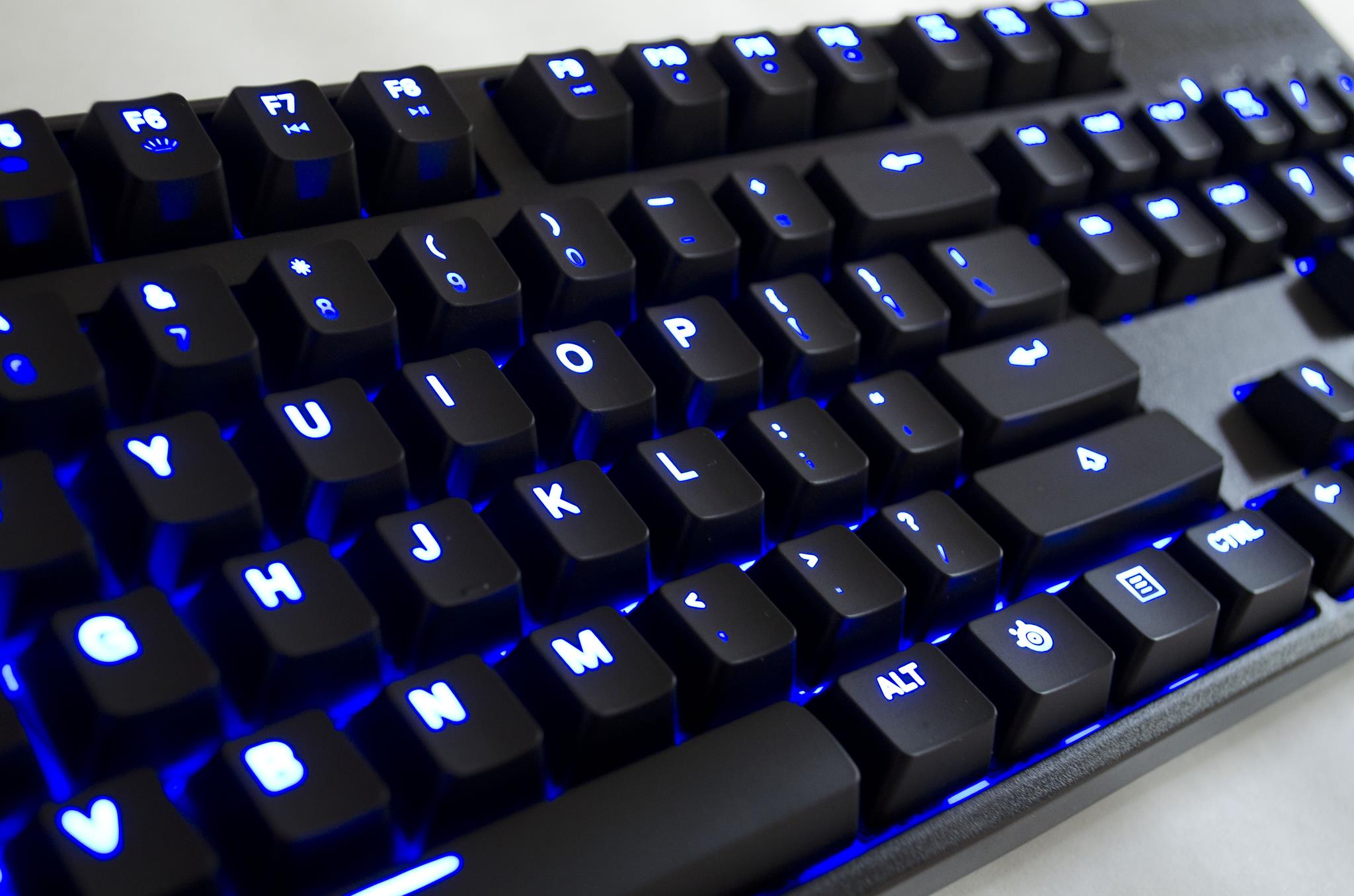 The backlighting is strong, and here you can clearly see the replaced windows key.

Physically the keyboard is small for a full-size standard layout keyboard with a numpad. The border around the keyboard itself is very thin compared to most other keyboards which may save you a few centimetres of desk space. If you are looking for a minimal look this board is good for that as well. The cable can be routed underneath the keyboard so that it exits at the rear of the keyboard in the center, on the left or on the right. It does not contain niceties such as a USB hub to plug your mouse into. It also doesn’t come with a keycap puller which is useful for cleaning your keyboard and we feel SteelSeries could have easily included. The software allows you to add macros, and change the polling rate. Both of these features can be had with other pieces of software so feel free to skip SteelSeries’s software. As far as we can tell the only special thing the SteelSeries software can do for this keyboard is make the backlight pulse or “breathe.” The upside is that this keyboard works without drivers on any operating system that supports USB keyboards.

In conclusion, if you are looking for a good deal on a mechanical gaming keyboard the SteelSeries Apex M500 should be on your short list. However, as with all mechanical keyboards, you should try it out before buying it, especially if you’ve never used Cherry MX red switches before or are new to mechanical keyboards.

Moving on to the SteelSeries Sibera 350 USB headset, which has some features in common with the Apex M500 keyboard. Most obviously: it lights up. Unlike the keyboard, it can light up any color you choose, so feel free to use it as a mood ring to tell everyone else at the LAN party how good you feel about crushing them. Other than the illumination the headset is a basic stereo USB headset, despite its claims of being 7.1 surround sound. You only have at most two ears, and indeed the Sibera 350 only has two drivers, one for each of your ears. Mapping 7.1 surround sound to stereo is done entirely in software on your CPU by the SteelSeries drivers, possibly stealing precious CPU cycles away from your favorite game and probably doing a worse job making the game sound three dimensional than the game’s own engine would if it were set to stereo in the first place. Any recent game engine is already set up to provide an immersive experience with headphones and has a lot more information to work with than the SteelSeries drivers, so not only is advertising the headset as 7.1 surround sound misleading, but also probably a bad idea.

Once again this USB headset works almost completely without drivers of any kind on any OS, the only missing functionality is being able to control the color of the LEDs on your ears without the drivers. The headphones and microphone both sound good, but aren’t anything special.  The headphones sound flat and detailed throughout their range but do not have strong bass. Everyone but audiophiles and hardcore bass-heads should be satisfied with the sound. The set is very comfortable lending itself to hours of gameplay without any pain. It also isolates you relatively well from the environment, cutting down on distractions while you game.

The microphone is directional, so make sure you have it rotated with the slots pointed toward your mouth while and the small hole pointed away. The directionality reduces background noise and this headset should be very usable in many environments even, those with moderate background noise. The microphone doesn’t create any noticeable hiss or buzz on its own, something that many old-style analog (not USB) headsets struggle with. Microphone gain is adjustable and at its highest setting is suitable for talking in a loud whisper. The microphone retracts nicely to stow it away when its not being used. 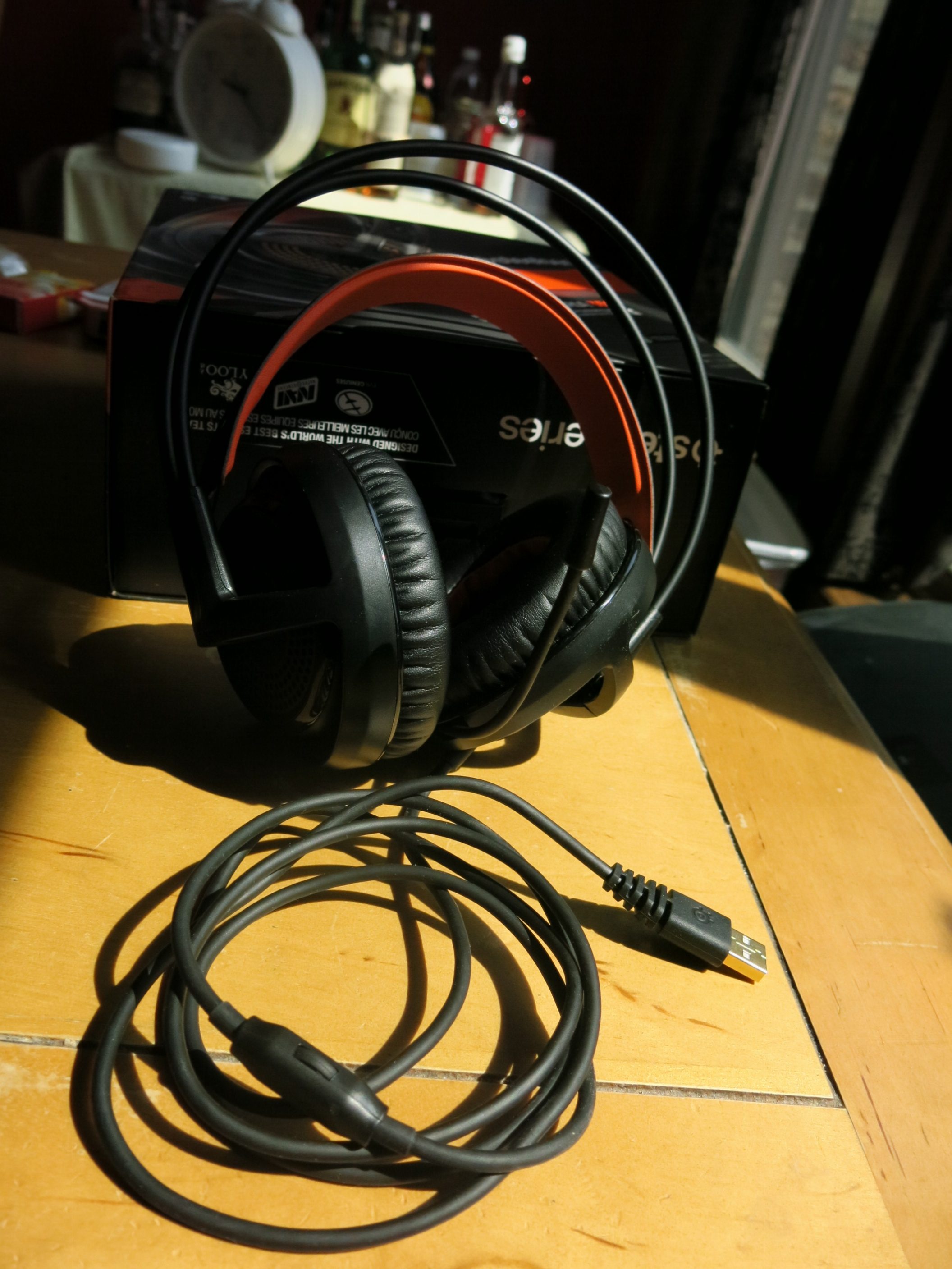 Inline volume control and retractable mic are two of the nice non-standard features Steel Series puts in to this headset.

On the more technical side, SteelSeries claims the headphones have a frequency response from 10-28000Hz, with a sensitivity of 80dB: these specs are presumably for the physical, analog drivers in the set. Unfortunately, they don’t make a lot of sense for a digital, USB headset. The headset supports sample rates from 8000Hz to 48000Hz which means that it can’t possibly reproduce any frequencies above 24000Hz, the sample rate’s Nyquist frequency. The sensitivity makes even less sense, because they indicate how loud the headphones will be for a 1mW analog input. For digital headphones only decibels relative to full scale (or dBFS) is at all meaningful. The microphone specs have similar problems: all the specs are for an analog microphone, and this microphone is digital! Unless SteelSeries expects us to disassemble the headset before use, we hope they correct this and provide meaningful specifications for the headset. SteelSeries, if you’re listening: please provide the specs relative to the digital input/output of the headset, including dBFS sensitivity of both the headphones and microphone at maximum gain, whether the frequency response is measured at -3dB or -10dB, how much background noise isolation the headphones provide, and how directional the microphone is. No one wants to buy a $120 piece of equipment with no idea of what they are supposed to be getting! The headset supports both 48000Hz sample rate as well as 44100Hz (same as a CDs), which can be important in some rare situations, though modern OSes will handle this automatically. 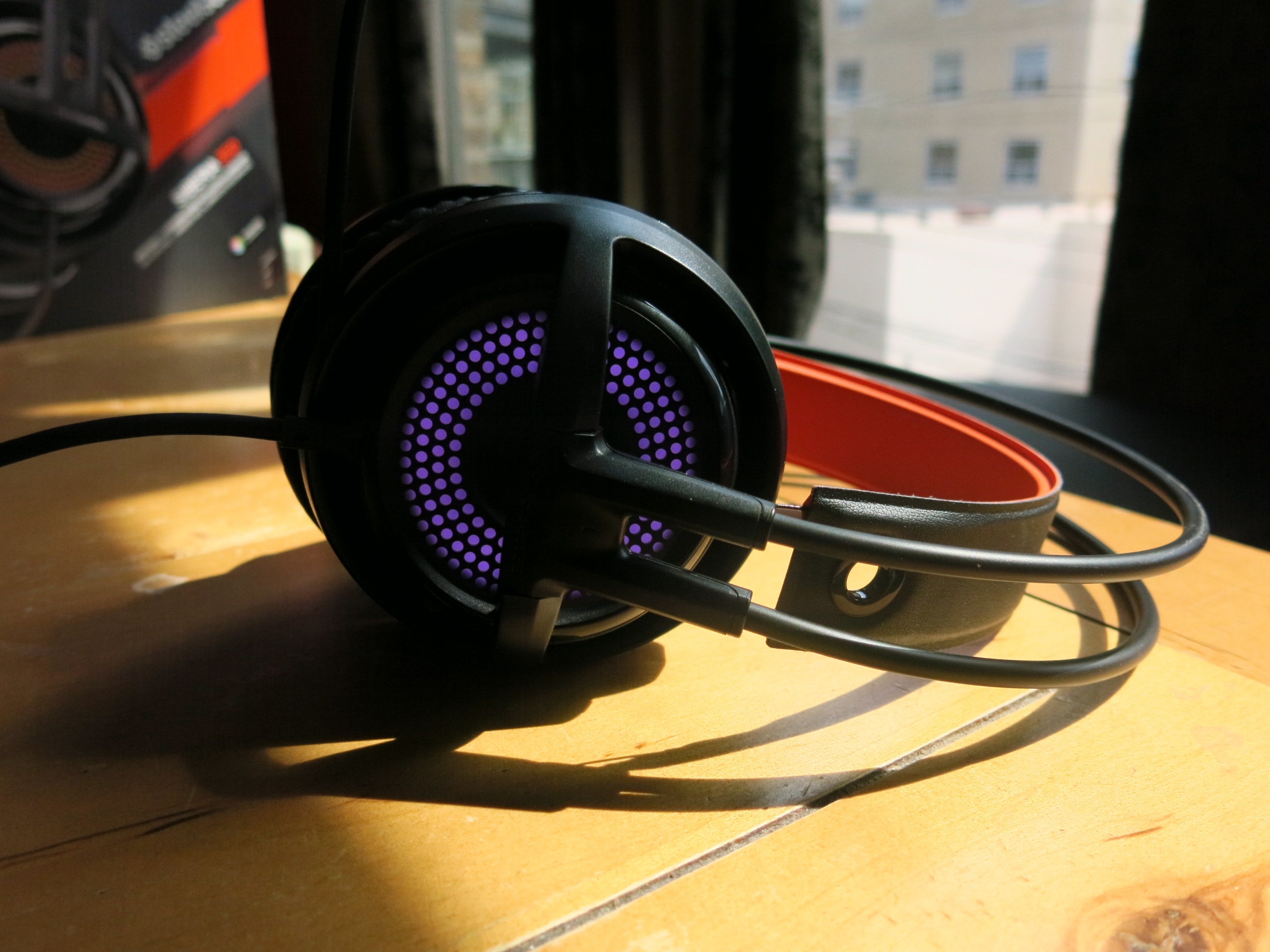 For fans of music games where audio latency is meaningful, the headset supports low-latency operation: 5ms latency worked reliably in Linux, but there was no latency configuration available in the SteelSeries software on Windows. Similar to the Apex keyboard, the only real functionality missing when using the headset without SteelSeries’ software is changing the color of the LEDs. It also provides the ability to equalize audio, save and load presets, control microphone gain, automatically control microphone gain, etc. but these are all functions available in other pieces of software. The upside of this is, however, no-fuss installation on any recent OS.

Overall, this headset is very good, and something you can buy without worry, as SteelSeries have taken care of all the little details ensuring it is comfortable, usable, and compatible. However, we would feel more comfortable with pricing closer to $100 than $120.