If you haven’t ever heard of Dreadnought I can’t say I blame you. It’s had a rather stealthy run over all, and although it was at PAX prime last year, that was the only time that it surfaced, and since its been deep under in development. Now, it is back, this time with a free to play model, and sporting a buy in beta. I can’t resist a good space game, so I forked over the 40USD to get myself and few friends’ copies of this new outer space shooty game. For my 40USD I got in to the beta, got 4 invites to give to my friends in to the beta.

First I have to say it, this game is so beautiful. Though there are only at present a few maps, each one is designed to maximize the 3D space, carefully crafted to provide players with spaces to hide dart in to and shoot around.  Space combat can be very boring, so to spice it up Dreadnought has broken the standard formula of 3d combat. In most space games you approach an enemy, then circle around them while firing your weapons at them, that’s how space combat works, space is big open and empty so it’s easy to adopt an orbit of any attitude around your enemy and fire at them. Dreadnought doesn’t allow for that, instead it places a ton of cover at various places on both the X and Y axes of the map, so your ship can literally take cover to avoid attack. This makes the game feel more like a shooter than a proper space sim, but it’s an incredible example of what can be done with 3D space and movement when it’s all planned out and well done. Not much compares to the feeling of pushing your ship in to a small space under a piece of cover, or dodging missiles by diving lower down and making them lose tracking. 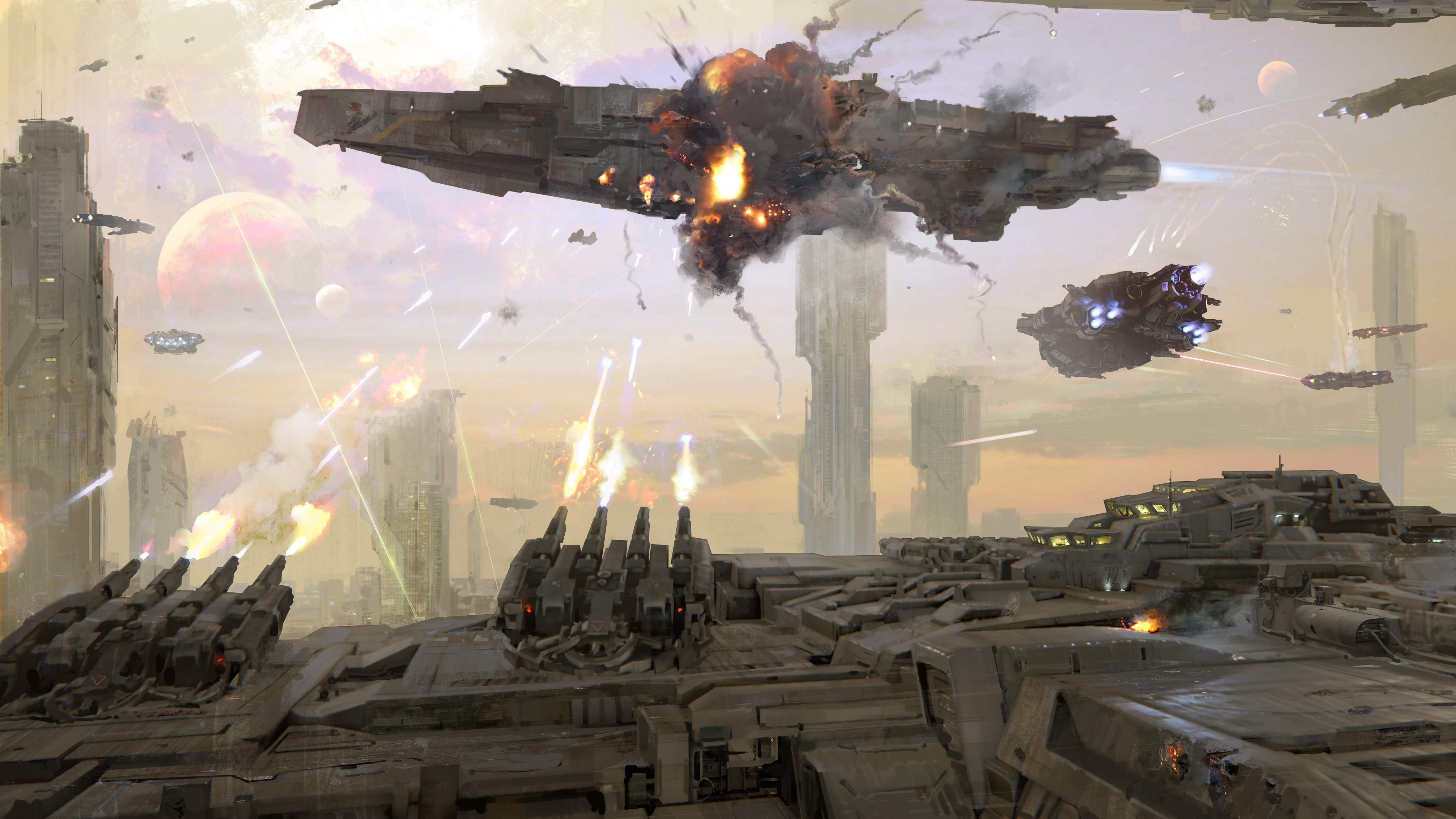 You wont get to see this angle in game, but it gives you a good idea of the sheer size of the bigger ships

The game features a ship classing system, with 5 main classes. Dreadnought is the heaviest, being a large lumbering weapons platform with a lot of guns, and health. The destroyer is a balanced ship, with dreadnought class weapons, but less armor in exchange for more speed and maneuverability, the corvette is the smallest ship, used mostly for hit and run and its lightly armored and fast, the tactical cruiser is the games medic, but don’t get too close or you might end up feeling the wrath of its powerful offensive lasers, and finally the artillery cruiser is basically one giant gun, filling the sniper role, allowing you to dish out massive damage from range, but also being slow and requiring skill shots to hit targets.  I found myself mostly going in to combat as either a tactical cruiser, or a destroyer feeling that the massive dreadnought simply made me too slow to react (even if it did get a nuke in exchange). Regardless of which ship you are going to take this is a combat based game, so lets talk about that a bit.

Combat is also quite fun, the game features a MOBAesq (I hate that word) system, each ship has two primary weapons, in most cases one short and one longer range, then a series of abilities which can be buffs, heals, weapons, or other things. These modules are interchangeable but the things you change them for all require unlocks, more on that later, so to start off your selection is limited. The main combat in most of the games I played was done in a pretty formulaic manner; first if nukes were present, they get launched right off the bat, since their range is infinite. Then both teams sort of feel each other out, often launching salvos of missiles while artillery cruisers range the enemy’s fleet.  This may just be because I am a lower level player, but most of the time since the games go to 100 points and you get 5 points per kill, this opening minute or so of game play was very dull. The one exception that I did see came in the form of corvette’s who’s pilots have no need to feel out range and just dive right in looking for soft targets in your back line. 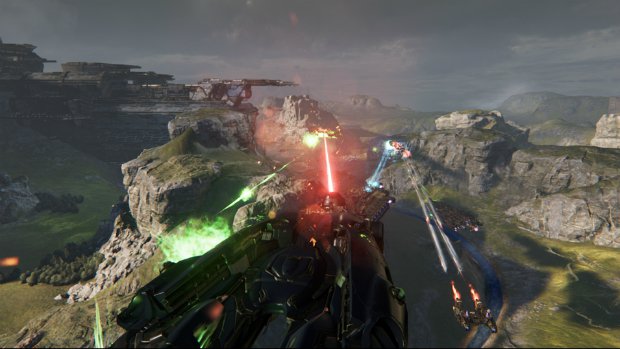 this is what youll be seeing most times.

Combat then devolves in to a basic melee, co-ordination is not possible with non-friends as the game does not have VOIP.  That being said, I did manage to get in to one game with a full party and we absolutely destroyed the other team. I found this to be a bit of a problem, though I played about 40 games, the vast majority were one sided affairs, with my team either winning by a large amount or getting stepped on.  Combat is fun, if slightly one dimensional. Damage is the same everywhere on the ship, so you can’t for example get behind a ship and hit its engines doing more damage. To counter this each ship has 3 options to make things more interesting. These options are Speed, Shields, and weapons. Each of these drains out power from a reactor. Shields mitigate damage, Weapons makes your guns hit harder, and Speed makes you go faster. Its all very straight forward.  To say that combat is boring would be a bit to far, it is in fact fun, if slightly one dimensional.

Combat really comes down to power management and line of sight, there are a few weapons (mostly missiles) that if you can acquire a lock for are fire and forget. The rest of combat is very involved, you have to lead targets, ammo is slow moving and visible and especially larger ships really feel like capital ship combat, trading hundreds of rounds back and forth while their players manage shields and power needs. Various ships can be used to counter various other ships, and your team will be well served to swap out different ships when one strategy or another doesn’t work because you all decided to play dreadnoughts just to see what 5 nukes looked like.

Two game modes are present as of now, one which is a straight death match, to 100 points, with each kill being worth 5 points. The second is a 5 round one elimination game, where each ship has one life. Die and you’re out, forced to pilot a tiny little fighter ship while the rest of your team tries to make up for your stupid mistake. I found this mode extremely infuriating and only played it about 5 times before switching back to the death match. 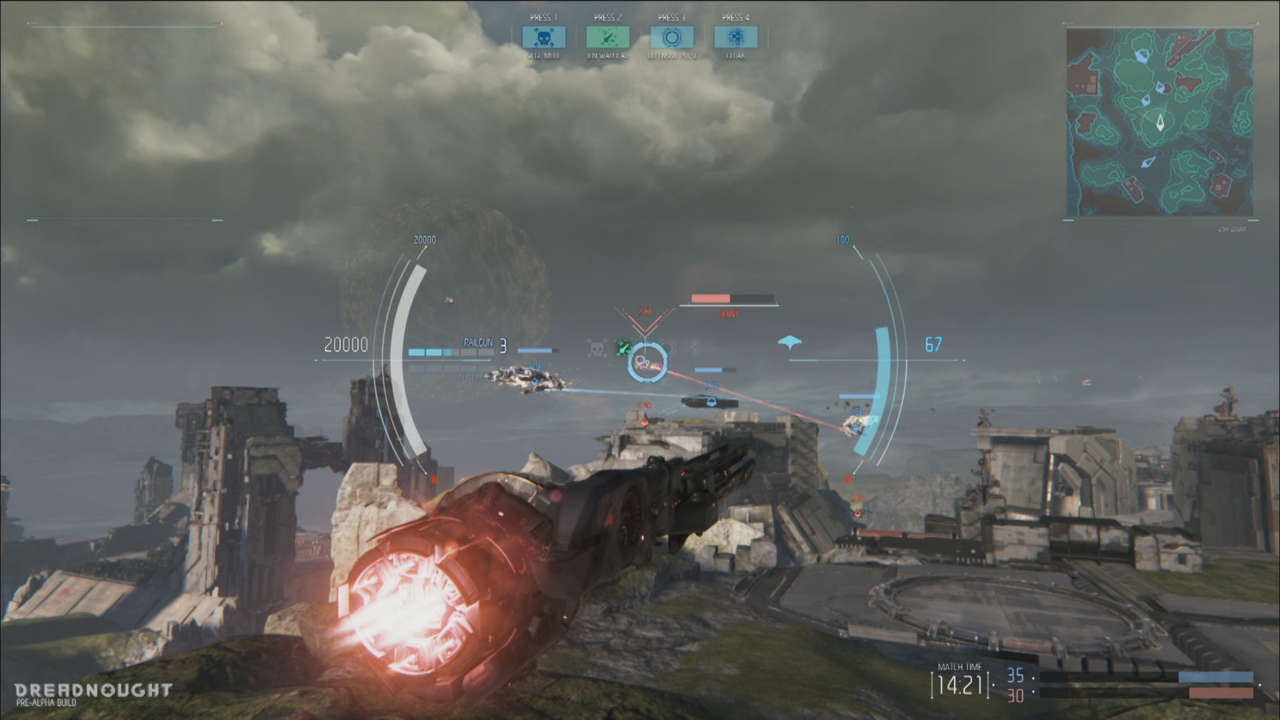 Here you can see the abilities on the top row, your health on the left, and your amount of power on the right. The score is in the bottom right and the minimap the top top right.

Overall the game feels pretty good, I wish there were more ships, and the monetization model is kinda wonky at the moment. Basically like most mobile games, you have two kinds of currency, the premium one and the one you can earn. At present this currency is used for most of the modules, ships, and other things in the game, while the earned currency is much less utilized. This model is subject to change, and has already changed at least once, so I would expect it to keep happening.

Monetization and other issues aside, I found the game play fun but really repetitive, there are only two game modes and of those two modes I only wanted to play one, there are a decent number of maps, but you can only play the same 4 or 5 maps so many times. I was helped in this case my having my team do silly things like all go corvettes or all go Dreadnoughts to keep things fun and fresh.  That aside there is also a massive grind involved in unlocking all of the games 50 levels for getting all of the modules and abilities, and there is no skill based matchmaking. So, what that means is that sometimes your going to go up against top of the line ships, with your basic tier 1 ships, and your going to have a bad time.

Im going to keep an eye on this game as it gets closer to release, since it has no cost of entry if you like playing space combat games or are fascinated by the idea of three dimensional combat in actual space style game this is worth checking out. If you are not interested in playing a game that is still very much in development, and may change right down to its core mechanics I would take a pass on this one.