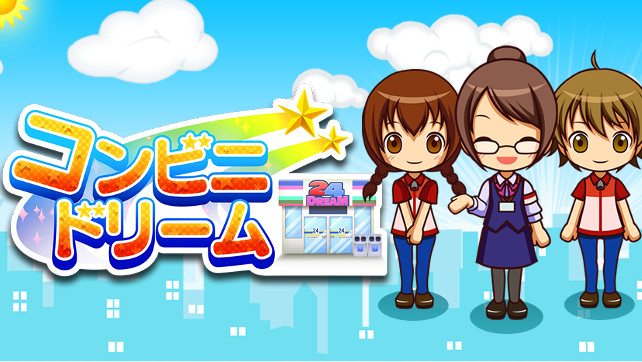 Circle Entertainment confirmed over social media on Thursday that their upcoming import title Conveni Dream will be released in the Nintendo 3DS eShop this month. They then confirmed earlier today that they are looking to have the game hit the 3DS eShop on May 26th at a targeted price of $5.00.

Conveni Dream was developed by Arc System Works, was released in Japan in September of 2014.

Conveni Dream is a shop management simulation game. As the novice owner of a convenience store, it’s up to you to sells goods and make your store flourish. You’ll be tasked with the arrangement of shelves and products, dealing with angry customers, and also managing a variety of events and missions that occur throughout the year.

This isn’t the first virtual storefront simulation from Circle Entertainment. They previously released the DSiWare title Bookstore Dream as well as Publisher Dream. This also may not be the last in the Dream series, as Arc System Works has a fourth game in the series already available in Japan in Gourmet Dream.

Interestingly enough the reasoning behind the $5.00 price point rather than the more traditional $4.99 price comes in response to requests from gamers. With the new My Nintendo system, 10 gold coins are only collected for eShop purchases $5.00 or more. Thus a purchase of $4.99 would result in no coinage. (In Canada that threshold is $7.00 CAD).