Speed Runners is an endless runner with a twist. You have probably played endless runners before, perhaps on your phone? The objective is to run (forever) collect some things, dodge some obstacles, and eventually die. Speed Runners is a new take on this genre from TinyBuild games, it adds because it adds competitive multiplayer. You will still be running, in fact it’s the main point of the game, but you will also be competing against three other runners all on the same screen. You will traverse a variety of obstacles, and use a items to hinder your fellow runners.  All in all it’s a fresh new take on the running genre presented in an easy to digest 2D package.

One of the many things I often find myself doing is picking up games on steam that cost less than $20USD just to give them a try. Speed Runners is one such game. Usually I buy 3 or 4 copies to play with a few friends, and with Speed Runners this is basically essential. The basic premise of speed runner is to run, and run fast. 4 Players run through a series of levels with a single simple objective, survive. The breakneck pace of the that survival is what keeps the game interesting. 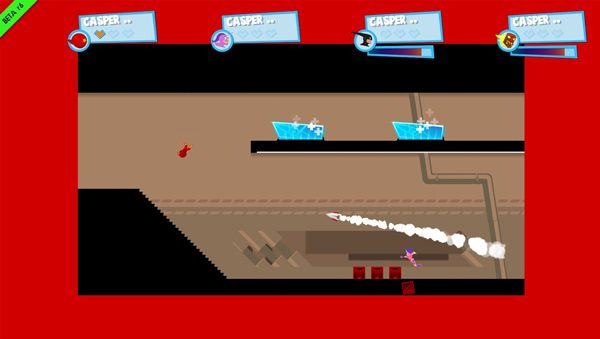 Red is bad do not touch red

It’s not to oversimplified to get boring, but the whole point of this game is to run. Other than that its really just two other buttons, one to use items, and one to jump. The premise is absurdly simple, but the variations are so many as to honestly be fun while never feeling too repetitive. There are walls to run up, spikes to avoid, things to jump over, and that’s just the level to say nothing of the other players who are also constantly trying to kill you. Each level has its own unique spin, and games consist of several very fast rounds where players run trying to not fall off screen (if you go off screen you “die”) the first to win three rounds wins the game.

The real variation comes in what you are trying to dodge, levels consist of several different obstacles, boxes need to be jumped over, ledges slid under, walls must be climbed in that oh so ninja fashion where you bounce back and forth between two walls to ascend the heights. There are also some surfaces from which you can, and indeed in some cases will need to, swing from using the games grappling hook. Yes the game has a grappling hook. Ill explain more later, but needless to say its pretty awesome when you nail that perfect wall jump in to grappling hook double jump on to that ledge to leave your competition behind.

Thrown in to all of this already complex soup is the added flavor of items, players can collect Mario cart like boxes on the map which give them items to use against their enemy runners. Hookshots, missiles, boxes, bombs, drills, and even a fireball and a freeze ray can all be picked up from these boxes. These items can be used while running to deter other players from running. A well placed ice beam or fireball can be the difference between winning and losing a round, but my favorite item is the hookshot. This items is incredibly infuriating and satisfying at the same time, there is nothing quite like nailing a good hookshot that hurls you across the screen to victory and throws your opponent back the other way. Its small satisfying moments like this one whihc

It all sounds really simple, but honestly it’s one of the most fun experiences I have had this year, its accessible, simple, easy to play, easy to get in to but has a skill celling higher than it appears. I spent about three hours playing with our sponsored streamer Roblogfett (vod link) and even with just two players and two bots (the game is designed for 4) I found myself laughing, screaming, crying, and generally just having a really good time.

The game is also surprisingly deep, there are levels and levels of unlocks, and several dozen skins you can apply to your runner. These unlocks are quite fun and play in to that reptilian part of the brain where you are made happy by some arbitrary tiny reward. It was enough to keep me playing for three hours in a single sitting so it’s safe to say they are doing things right. I never onece felt bored 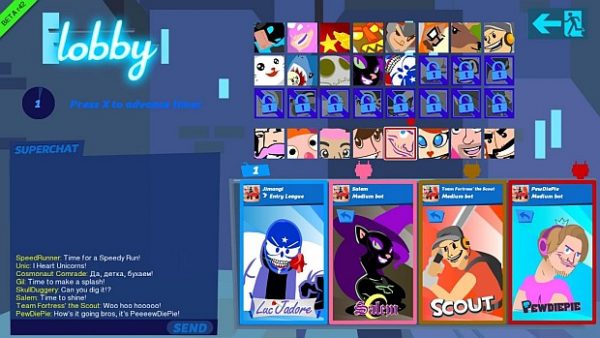 For a game that’s the sequel to a flash game that ran in your browser I wasn’t really expecting much, to my pleasant surprise the game features a full set of graphics, sound, and control options, as well as full game pad mapping.   The 2D action translates to fast unbounded fun, that most players are never out of. While a screw up early on can put a player out, the game is incredibly forgiving when it comes to screw ups and often times the lead changes frequently and a single item is the difference between winning and losing a round. This is further exacerbated by the presence of items, which can swing a round in a moment.

Many times I found myself and Rob in a dead heat with the CPU controlled runners vying for space as we rushes around the level. The computer controlled players are no joke in Speed Runners either, they have several different levels my favorite of which is called “unfair” and is actually unfair with the bots basically winning 90% of the rounds. Other than these cheaty level bots I found the AI to be pretty fair, and mostly challenging, with out being too bad.