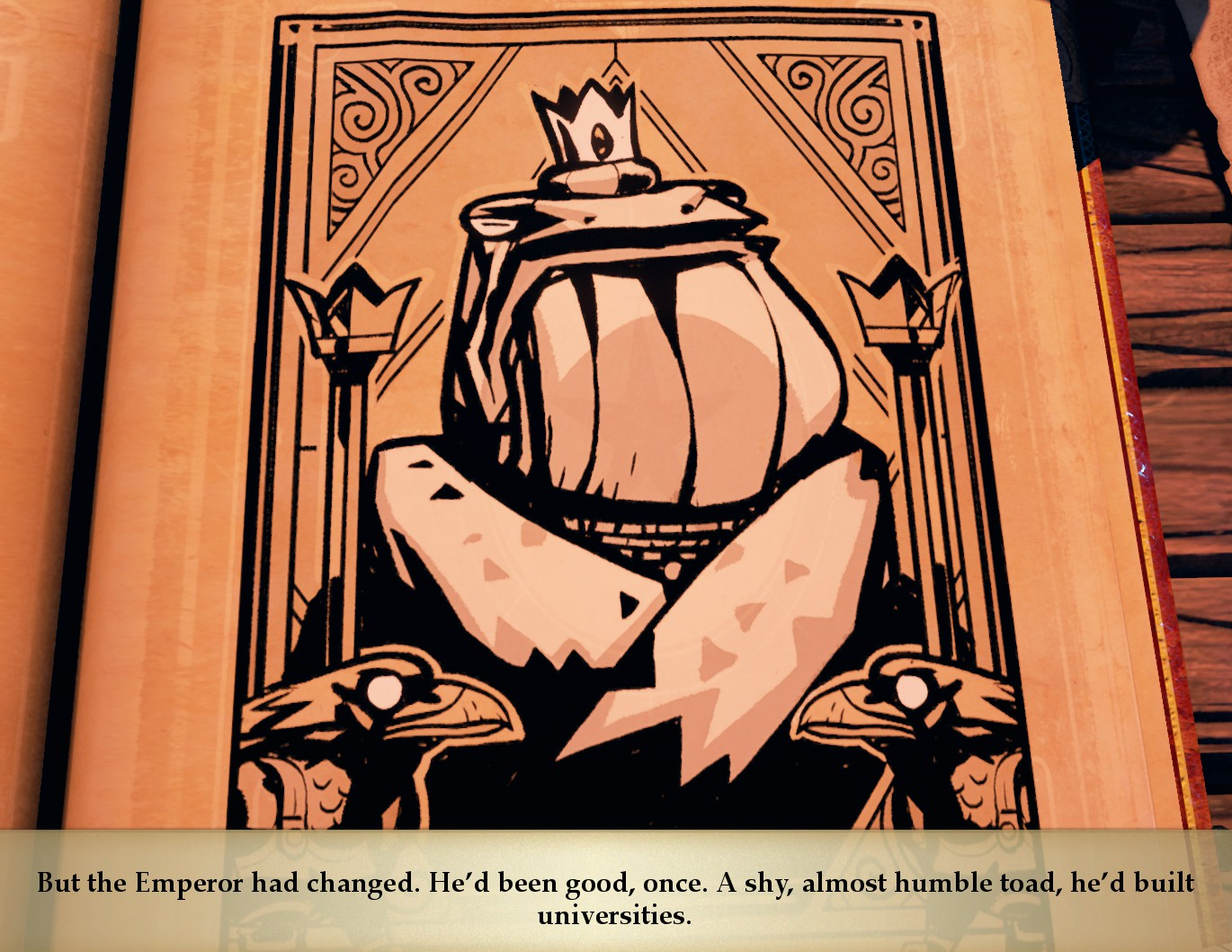 “Stories: The Path of Destinies” is a fun, lighthearted action-RPG set in a high fantasy world of flying ships and sky-islands. You are going to lose, constantly, and you are going to love it. Stories is a bit like a choose your own adventure game, or the recently resurgent interactive fiction genre. It is meant to be replayed. Sessions are quick, lasting only about an hour at a time. Most of the time, though, you’ll end up making the wrong choices and perishing inevitably. That said, this is what sets “Stories” apart in the genre. Your choices define your person and your fate. After each session you can go back and read a summary of who you were and what your choices brought you. 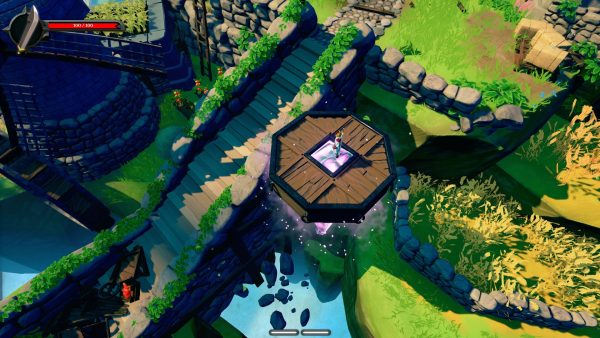 While sessions are short and sweet, the larger concept of the game is still like that of many action-RPGs. You acquire piles of loot, level your character and buff out your stats. There is, of course, crafting. Like most of what you acquire in game, crafting resources are kept across sessions. Any new weapons you build or gems you pick up are usable from the beginning on your next play through. This is important, as new areas become unlockable as you replay levels. Swords are the craft-able item of the game, and those swords are also your only weapon. You start with just one, but there are four basic types and each has multiple upgrades for you to take it through. Each also acts as a key to unique areas in the world, so you have to choose early on between focusing on one powerful sword, or trying to get access to everything in the game. There is also a mechanic of learning “truths” in the game. This is the other major attribute beyond items and skills you carry across sessions. Knowledge about characters and artifacts that you might only run into by following one choice doggedly through to the end comes from these truths. These unlock more of the game as you go as well, or at least give you more informed choices. This is a unique mechanic to the game that leads you to playing through paths you might not otherwise have considered. 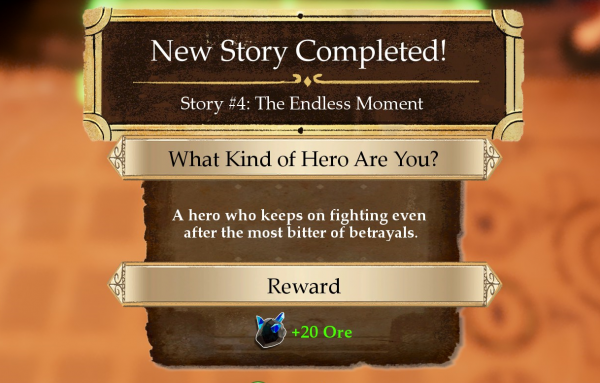 Another unique aspect of this game is the outstanding narration. The narrator’s lines are simple and witty, but keep you interested and grounded. There is a narrator who follows your actions, not unlike Bastion. This narrator keeps things light and fun with puns, pop-culture references and by giving a game with sometimes limited conversation depth a channel for character development. The narrator is just as happy to make fun of you for smashing barrels as he is happy to make fun of you for choosing a fate ending in a ridiculous death. Of course, both of those things will happen. This reminded me a lot of Bastion at first, but the tone and style of narration is very different. Honestly I felt it was better done, as Bastion was sometimes too careful not “lead” with its narration and didn’t give its lead as much character as it could have. 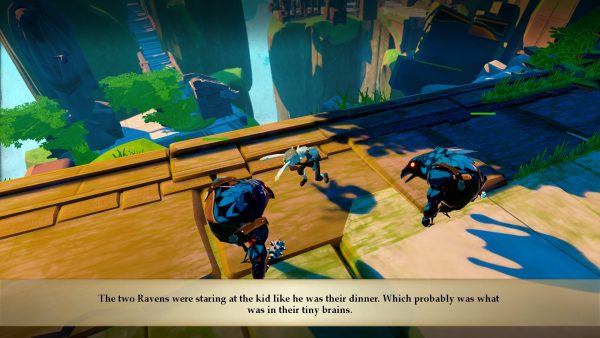 The narration works because of the short, tightly scripted sessions of “Stories” that make your gameplay choices relevant and easy to follow. You won’t get lost in text heavy conversations following some deeply incomprehensible background story on your first go. The major choices are made immediately clear between levels, even when their consequences aren’t. While between sessions you start with just “choose A or B” you slowly build up a panoply of choices, and each leads only to other certain choices. They aren’t multiple ways to achieve the same goal that just end up re-converging like in many level based games. They diverge wildly, save a friend or don’t, and if you don’t, that entire possible branch of the story is gone. The developer, Spearhead Games, is on to something here, and it’s an impressive work. 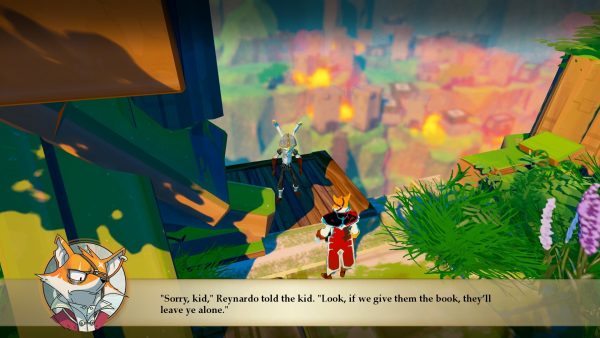 Spearhead is a fairly new, independent studio. This is their third release so far, and looks to be their most ambitious. Based in Montreal, their founders worked on earlier Assassin’s Creed games as well. This is unsurprising given that Ubisoft Montreal is responsible for most of that series. Like all hip new indie studios since the 80s, Spearhead started by making a puzzle game. This was an action-puzzle game called “tiny BRAINS”, released in 2013 on the PS4. Their second game, ACE, is a cyber-robot-soccer game. It’s still technically in pre-release on Steam but seems to have been started well before Stories. All of this is to say that these are developers who are not new to releasing, publishing, or the platforms they’re publishing on.

Stories: The Path of Destinies is also a simultaneous PC and PS4 release. This shows through in the gameplay, with its controller based style. The controls are fairly tight, and made good use of most of the buttons on my 360 controller as well on PC. I found the game fluid, easy to pick up and learn. The combat is fun, with immediate feedback on player skill after every battle. The combo system is ranked, and almost automatic, you can get through the first session possibly by simply mashing A, but unless you pick up blocking, dashing, and other skills, you’ll eventually get beaten to a pulp. Each battle is ranked, with points for style, combos and dodging blows. This is a unique mechanic that keeps the fast paced battles fun, with something to reach for in each one, rather than feeling like a repetitive grind for experience points. There are tons of skills to level up for combat. You acquire these by remembering them, rather than magically knowing new things as in most games. Your character was a retired swashbuckler and used to know a lot more. The skills tree is also fairly wide, varied and reasonably deep. Gaining solid progress will require playing the game for quite some time. Further, as you replay again and again, enemies will get tougher and new types of enemies will appear. On subsequent sessions with your character, those new enemies will also appear much earlier in the game. This keeps you on your toes for each play through and avoids having the challenge disappear in the early game of subsequent sessions. 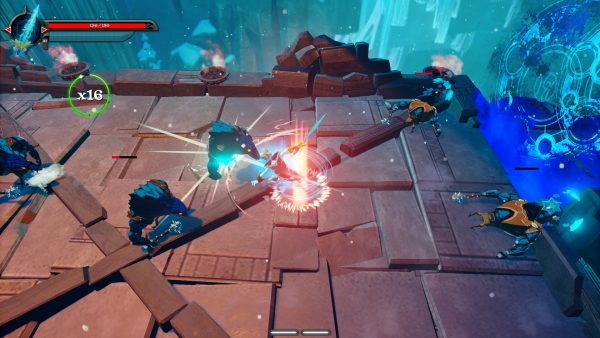 After having said all that, the graphics and music of the game have a lot to live up to. There are cel-shaded graphics keeping everything in the game bright, pretty and light. The game favors a colorful aesthetic that keeps it fun to look at. There are very unique settings as well, jumping across sky ships, wandering the edges of floating islands that move, with massive amounts of layers and animated parts. There is a lovely feeling of depth, you can often see above and below your character to get a hint on what’s coming up, or what you can’t quite unlock yet.  Those unreachable areas and background art lend a sense of size and scale to the levels so you don’t feel too fenced in. The characters themselves are anthropomorphic animals, keeping the game feeling light and fairy-tale like. For example, you are a clever rogue, and of course a fox. You’ll run into wise toads, angry ravens, purring cats and flighty rabbits. Some of the characterization feels right out of Aesop. 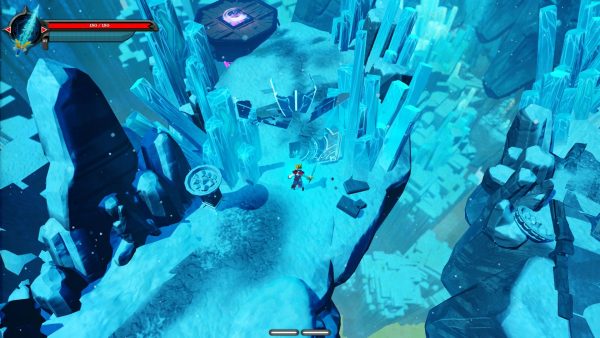 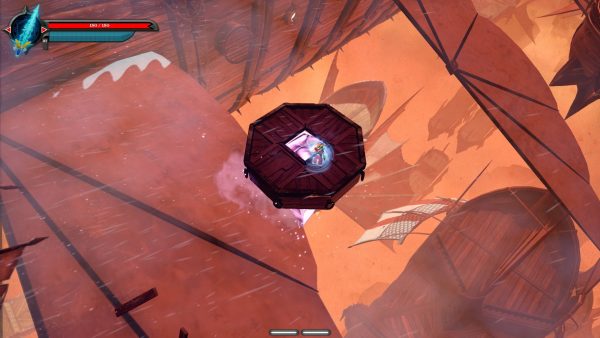 When it comes to sound, the narration is what really stands out in the game. There are of course subtitles too if you can’t follow it. The music however, while dynamic and professional is not overwhelming. It’s the standard classical-light of video games, a common style choice for the genre and games as a whole. It sounds like a nice string-heavy chamber orchestra, but is obviously synthesized with every note perfect. While it worked just fine, I don’t find myself humming the tunes of the game out loud or even really remembering them. I found the sound effects to leave a similar impression. Swashes buckle, swords clang, enemies grunt and boxes crack. They’re fitting, present, but not overwhelming. Overall, as I’ve said, the audio fits into two boxes: the narration is beyond superb and a standout part of the game, but the music and sound effects are simply functional. Nothing came across as grating to me though. Given Spearhead Games’ smaller budget, it’s a win. 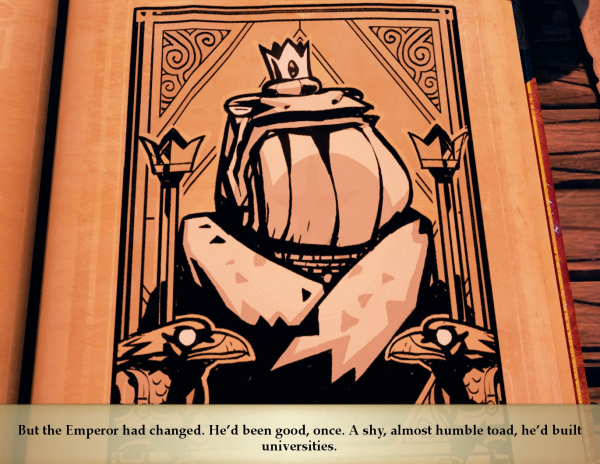 “Stories: The Path of Destinies” is a lovely, lighthearted game. It’s a very unique interactive-fiction twist on the action RPG genre. The witty narration, tight gameplay with combat ranking, and meaningful impact of choices on the story make for something very refreshing and unique. This was a brilliant design choice for the style of game, but I could see why it’s not plausible to do in larger settings. There are many fresh ideas to be found in this game, the developers obviously have thought a long time about what they’d like to see in the genre. “Stories” carves out a unique niche by its approach, and look forward to seeing more from Spearhead Games.