Review by Robyn Robo
Back in 2014, a new independent developer in Finland by the name of Bugbyte started making mobile space combat games called Battlestation. Now, they’ve made their first PC release on Steam with Battlestation: Harbinger. This game has obvious mobile roots, but makes for a fun, affordable and instantly gratifying desktop game. Written in Java, the game runs on Windows, Linux and OSX. I tested on Windows and Ubuntu 14.04, and I had no issues with it. In fact, it should run on any machine with a GPU built in the last decade.

Bugbyte has had an interesting history. The company is a tiny one, with the only 3 staff being the founder and his brothers. They went nearly bankrupt in the current mobile games market and pulled through via a Reddit AMA, Kickstarter, and other new funding and social sites to make it to their Steam release of Battlestation: Harbinger (simply referred to as Battlestation for the rest of this article). There, Battlestation is currently available for ten dollars, with 20% for its launch week. Assuming it takes off, all is financially well that ends well.

Battlestation is an interesting game, combining select 4X elements to deepen a Rogue-like (permanent death and random levels) space combat game. The battles involve small to midsized fleets with careful, pause-able, real time maneuvering. The closest analogy I could think of to this game specifically is a 1990 release by the name of Star Control, also known in its open source incarnation as Ur-Quan Masters. You can also customize your ships with new items you build, buy or loot as you make your away across the map, jumping from system to system 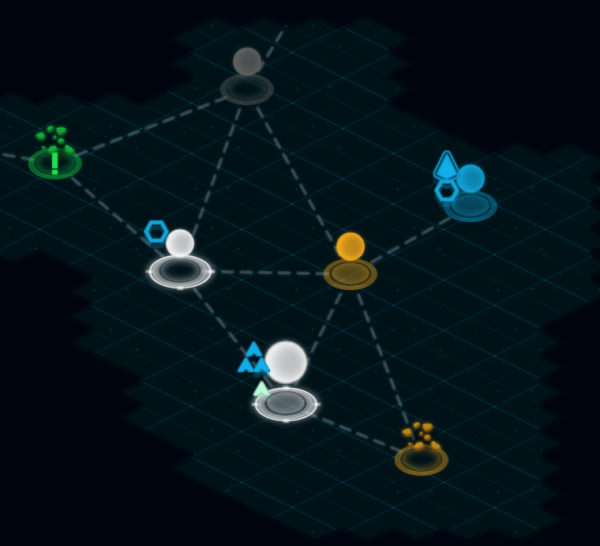 Each system consists of a single square arena where you run into natural obstacles, find debris or engage in combat. You may run into mercenaries, enemies or allies. Jumping between systems or hanging out in one causes a turn to go by, wherein enemies can also make fleet movements. Knowing or guessing their next move is essential to successful skirmishes. After battles, or in friendly or neutral systems, you can repair your ships and use upgrade points and scrap to build parts, buy new ships or upgrade your existing componentry. The equipment and ship schematics vary widely and are heavily detailed, with dropped weapons often having unique and otherwise unobtainable abilities. Your only choices starting out, however, are the more affordable items built by humans.

Your starting place is by a titular Battlestation. You’ll run into plenty scattered across the map. They’re big, bad shelters in a harsh galaxy. In the paragraph-long backstory, they’re “humanity’s last hope” against some unknown galactic evil. Don’t run off yet. At the start of the game you get a semi-random amount of scrap and upgrade points that you spend equipping your chosen starter ship. Starter ships come in a limited selection at first, but as you play through more and more campaigns your save file will accumulate experience points, and more ships become available. Save files sync via Steam too, a nice perk. After equipping, you can pick up a starter mission from the Battlestation and jump off into the first map of your campaign. This is assuming you didn’t go into the tutorial first. The tutorial is a harsh, controlling affair but will give you a rundown of the mechanics of the game. 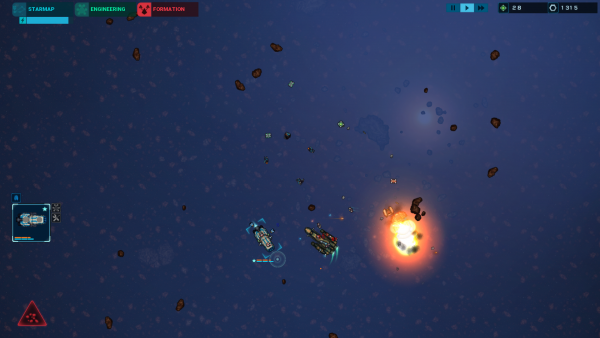 As mentioned the game is not a full 4X experience. It’s also similar to, but lacks the vast depth and breadth of, “SPAZ”: Space Pirates and Zombies. There are notable differences between the two, Battlestation lacks the research tree, has much smaller maps, plodding ships (there is a 2X speed button), yet gets going massively faster. If you want to jump in and start rolling, Battlestation: Harbinger is the way to go. I’ve seen 30+ hour let’s play videos of SPAZ, but I couldn’t imagine a Battlestation game taking anywhere near so long to start or complete. Battlestation’s story is a loose background, just an excuse to go out hunting and it should make no apologies for that. There seem to be a lot of these style of games in the last several years, as FTL and Gratuitous Space Battles both also came to mind while playing. The former has a constant, forward only motion and extremely different battles while the latter has far more detailed battles and fleet deployment. Again, Battlestation brings in more campaign / 4X elements while being arguably simpler and more action ready overall. I’m sure Bugbyte is aware of these competitors and sought out their niche intentionally, along with its first class mobile support for iOS and Android. On the mobile front, “Out There: Omega Edition” is the closest comparison I could think of, but as an absurdly harsh survival game, it’s not really in the same realm. Honestly, Out There makes me want to cry, while this game is harsh but generally controllable. 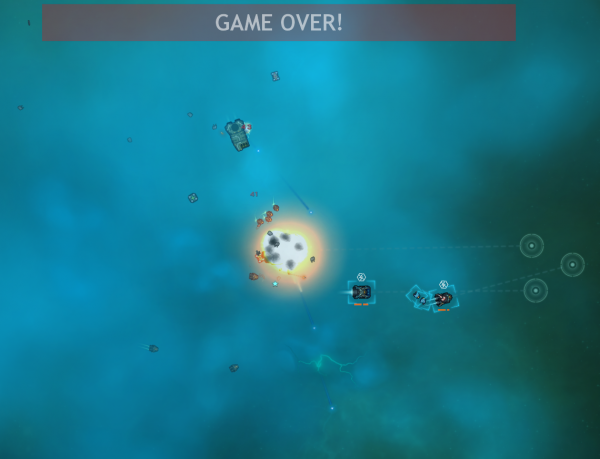 Crap, they got my flagship

There are some downsides to this essentially being a PC port of a mobile game. The controls are the big-button heavy style of touch games, and the keyboard shortcuts felt incomplete and inconsistent. The Steam version did add more ships, a new play mode, and new items. Nonetheless, this is built over the same core game as mobile. It’s likely some of the plodding feel to combat is also due to the switch in controls. Map scrolling and zoom also feel needlessly sluggish by default (adjustable), and I think that’s due to the lack of speed sensing when scrolling by arrow keys instead of swipes. Screen real estate is used poorly. Specifically, the inventory system has needless jumping around. 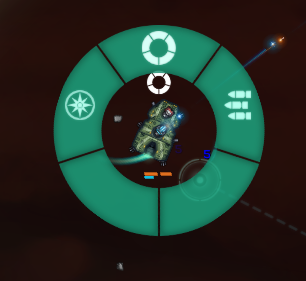 There is a three ship limit and it would be nice to see the desktop version allow for larger fleets. There is also an auto-jump feature that was poorly thought out. In play, you almost always need to plot where in a system you want to jump, and running into dangerous areas and enemy fleets both turn off auto-jumps and delete your jump path. Both events are nearly constant. There’s no solid “area control” that you can establish after defeating a horde of enemy fleets. You’ll run into more, even while backtracking. It’s possible destroying the well-guarded factories is key here. The closest I came area control was mercenary ships. They’re always friendly and you can hire them to accompany you for a set number of turns. You can use this to position them into “fallback” points for your fleet, someone to hide behind when things get a bit too rough. Keep them repaired, and they’ll be around for a long time. Hire mercenary ships at the end of a map and they’ll accompany you to the next one too. 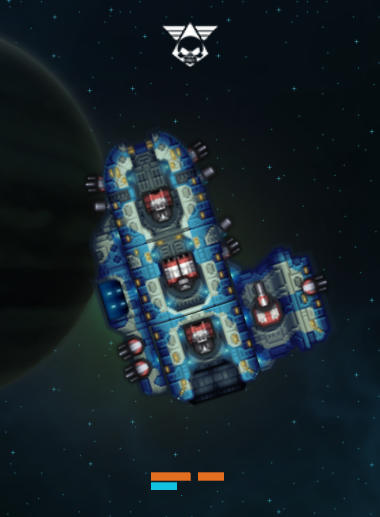 In terms of gameplay, there are some unfortunate awkward misbalances to the game. Very small ships can be added to the fleet, but they are neither nimble nor cheap enough to be very useful. Further, with the three ship limit, they will end up replaced quickly. There are fighters and drones that make more sense but, for your three fleet ships, the bigger the better. You need your flagship to be a tank that hangs back. If you lose your flagship, you lose the campaign. All fleet ships move at almost the same speed. Differences are present but tiny and don’t make up the gap for weaponry. The only exception is the ship teleporter which lets your ship jump around in bursts. Generally, though, better ranged ships can easily “kite” any others and there’s only that one semi-effective way to build a “melee” vessel. 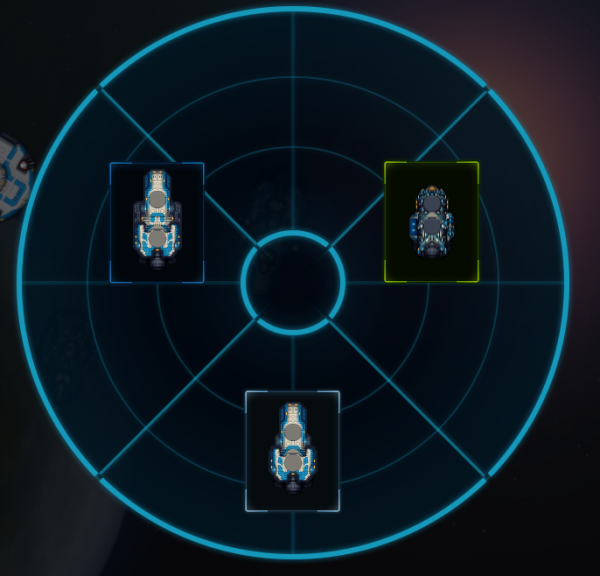 That’s it for fleet size.

In other areas the balance and variety work well. While you’re stuck playing as human, you have the largest variety of ship platforms and items available and can scavenge items of other races. This is very much the “humans as jacks of all trade” type of science fiction.  Each alien species, which are always your avowed enemies, use different tactics and technology. Some are drone heavy, some missile heavy, others more varied. This forces you to adapt constantly. 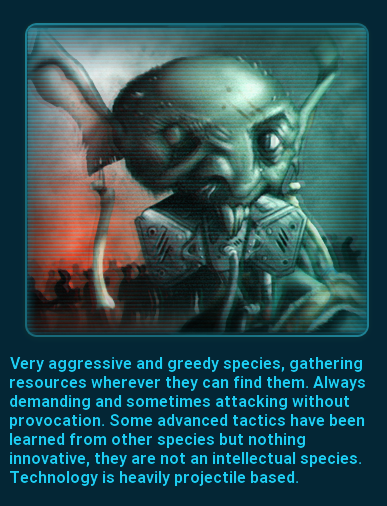 Sorry, this spoils almost half their plot.

The game is fun, learning to play takes five minutes and campaigns only take a minute or two before you slug it out with your first alien fleet. This is something you can come home to and feel like you’ve blown off steam and made some kind of progress in thirty minutes.

Battlestation also has the “one more turn” feel to it, no individual battle is usually big enough to be exhausting on its own and the dopamine hit from victory is usually enough to keep you going. Some 4X and RTS games end in battles so harsh and large I dread even starting them. Battlestation is fast enough you can take a “throw it against the wall to see what sticks” approach, but deep enough you can sit and calculate DPS between items while maximizing range and variety of damage types. While certain ship types are imbalanced, and fleets are small, there’s enough space to build support ships, gun platforms, carriers and other ship types into your fleet all at once. The 2D pixel art isn’t groundbreaking but it looks pleasant enough and get the point across. There’s also custom animations for every weapon on your ship. 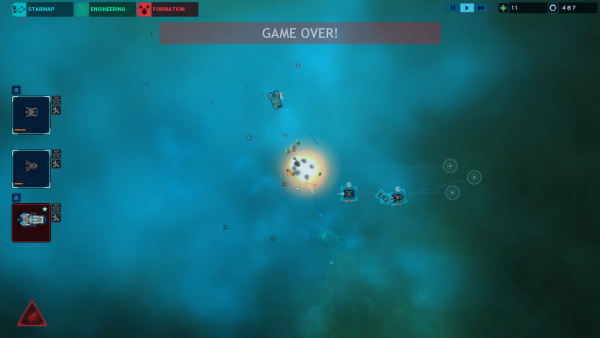 Battlestation: Harbinger truly resembles Ur-Quan Masters more than any other game I’ve played. It has a throwback style to its play of casualness without shallowness, one of my favorite aspects of many retro games. As an affordable game that’s quick to pick up, but could easily withstand long hours of play I recommend it. That said, if you crave huge campaigns, endless depth or careful balance, it’s just not going to meet your needs.