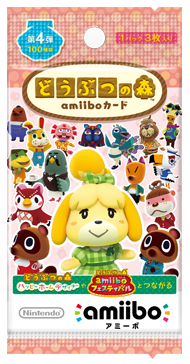 The third series of Animal Crossing amiibo cards may have just been released in Japan but there are already more planned.

On a post on Nintendo Japan’s website the next series of cards has been announced. The next 100 cards will hit stores in Japan on March 24th. As always the cards will come in packs of three for about ¥324. This will bring the series up to 400 cards.

The second series of cards just came out in North America last week with the third series of English cards set for March. While I have yet to complete my first series set I’ve already started collecting the second series.

Do you collect the Animal Crossing amiibo cards? Have you picked up any of the new series? Leave a comment below.