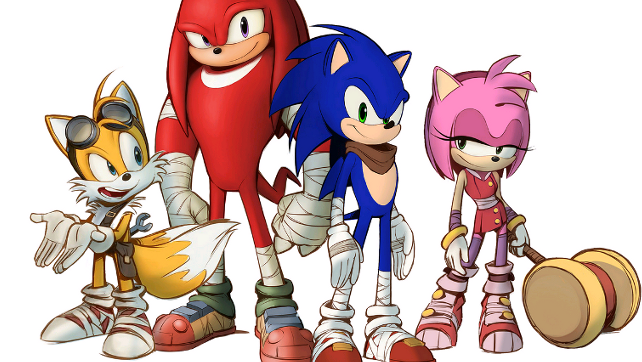 SEGA unveiled their next Sonic project with the announcement of Sonic Boom, two new games coming exclusively to the Nintendo Wii U and 3DS systems. But the announcement was more than just that with the revelation that the company is co-producing a new television series as well.

Sonic the Hedgehog has spawned more than 70 video game titles and four animated series since launching way back in June 1991. This year, SEGA is introducing a new branch of the Sonic universe, entitled Sonic Boom, that will debut a new look for Sonic and friends. The worlds of the TV series and videogame will share a common narrative and a number of location and stylistic similarities reflecting full collaboration between videogame, TV series partners and SEGA from the outset.

The Sonic Boom television series, co-produced by SEGA of America Inc. and OuiDO! Productions, will debut on Cartoon Network in the U.S. The series is an ensemble comedy consisting of 52 x 11-minute standalone episodes. Every episode starts from a small character-driven story and explodes into an epic tale of saving the world, robot battles and more.

Serving as a prequel to the stories revealed in the TV series, the Sonic Boom video game will deliver a totally different experience to previous Sonic games with collaborative gameplay at its core. Developed in the U.S by California-based Big Red Button Entertainment (Wii U) and Sanzaru Games (Nintendo 3DS) in collaboration with Sonic Team, this is the third title to be released as part of an exclusive deal with Nintendo. The videogame will introduce exploration, combat and a new Enerbeam tether mechanic that will allow the Sonic Boom world to be discovered in totally unique ways.

In addition to the tv series and video games, you can also expect a ton of license Sonic Boom toys, games and other merchandise to hit stores as well.

“We want to ensure that the Sonic brand continues to evolve and appeal to new generations of Sonic fans and this different look introduces a fresh approach that will be at once both familiar and new to consumers,” said John Cheng, President & COO, SEGA of America. “We are committed to supporting this initiative to provide great entertainment to fans for all aspects of their lives.”

Take a peek below first at the game trailer followed below that by a sneak peak at the tv series.