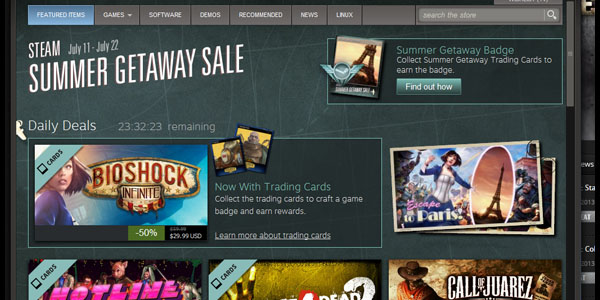 It’s official! After a heavy load of visitors brought the store to a halt, it’s now somewhat working with occasional heavy load messages. Today’s big sale? Bioshock Infinite at 50% off! Scribblenauts Unlimited, which we’ve reviewed and we’re very much fans of is on for a meer $4.99! Current flash sales include Counter Strike: Global Offense for just over $5, Dragon Age Origins Ultimate Edition for $8.99 (A fantastic game if you haven’t already gotten into it), GRID 2 and Skyrim: Legendary Edition top out the current sales featured every eight hours.

Things do seem a bit rough, even for the wishlist page, so at current time you may want to specifically go to the Steam page of games you’re curious about to confirm if they’re on sale or not. I know I’m eagerly checking my list.

Steam has also introduced a large focus on the recent addition of trading cards to the site. They’re virtual cards that apparently can be crafted into Steam badges. These in turn give you marketable items such as emoticons, profile backgrounds, and coupons. Cards can even be dropped in games such as Borderlands 2 it seems.