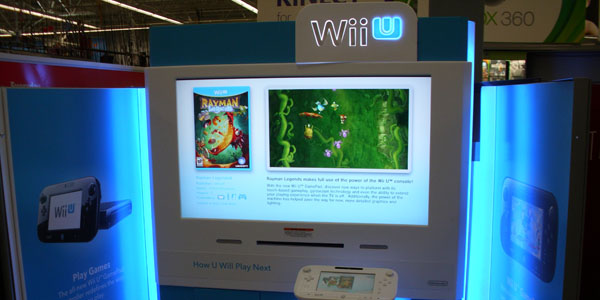 Demo units for the Wii U have been hitting the stores and Ghostwalker from Darkain Arts Gamers checked the one pictured above out at Walmart. I’ve personally seen them at Best Buy so far. The display unit is limited, but hopefully in the near the future you’ll be able to do a lot more with it.

Currently the Canadian version allowed us to select Rayman Legends, however the TV the Wii U was hooked up to was turned off. I tried transfering the Gamepad screen to the TV, but it still seemed the TV was indeed turned off.

Ghostwalker had a similar experience with no playable demo, but at least getting to look through a bit more having the TV to interact with. I must admit, the gamepad is as light as they say. It does have a good feel to it, but it is indeed lighter than it looks. That and using the touch screen does feel right. I usually use the stilus for the DS, but the Wii U gamepad just feels like something you should be completely hands on with. Either that or my stilus reliance on the DS explains why I was terrible at Metroid Prime Hunters.

Either way, first impression, I like it! The Wii allowed gamers to virtually interact with wiimote controls. The Wii U allows gamers to feel more in control and have a digital screen with interactive data on it. Well played Nintendo. 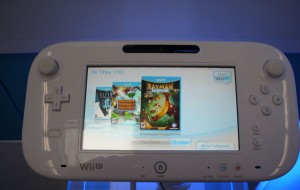