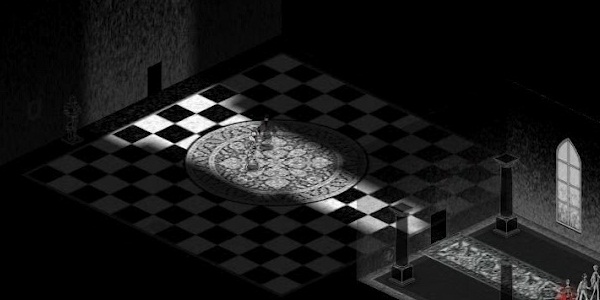 Two reluctant heroes on a divine mission, and neither one of them is a Belushi. Dolan and Jaime are swept up in an adventure full of religious fanatics and tricksters gods, all because Dolan pulled off a King Arthur impression.

The name alone is worth $5. PNPT is a table-top collaborative storytelling game in which players act as evil masterminds who much formulate their three step plan to conquer the world. They are assisted by hapless minions (but aren’t minions always hapless?).  “The use of funny voices, evil laughter and a passionate desire to rule the world is strongly encouraged.”

The ninja pandas require your money by July 22.

Haunt a cursed mansion, or be a plucky explorer attempting to learn the secrets of Haunts: The Manse Macabre, a black-and-white-and-red adventure from Mob Rules Games. The game offers single or multiplayer, and “scores of maps combined with variable goals, customizable rosters, and a variety of opponents offer endlessly unique and re-playable games.”

This project is already fully funded, but you may contribute through July 6. In addition to the standard reward tiers, each $5 you contribute nets you an additional copy of the game to give away (or sell, which is what Mob Rules suggests, actually…)