Halo 5 ‘s developers 343i promised myriad DLC for their newest entry in to the Halo 5 franchise, and it seems that the first wave of that promise has been delivered. 343 already announced in a blog post that they would be releasing the much improved forge mode in December, it now seems that we will get even more content in December. Design and Trend (a website that follows all things design and game) noticed the new DLC “hidden” in the forge mode video 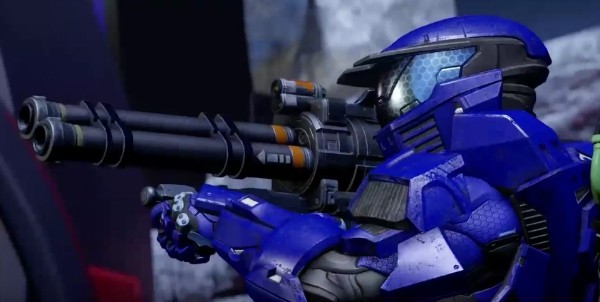 A still from the video reveals new armor and weapon skins

Thats the classic rocket launcher right there the SPANKR in all its glory. That single still appears at the tail end of an over two hour devlog about the game’s forge mode, by the end of which most people will no doubt have tuned out. The few frames seems to show the old rocket launcher (an addition many people would be happy to see) Also returning are the Mk4 armor (from halo 3)

Halo ha already had its first major update from 343I, called Shadow and Light it added the Big Team Battle mode, four new maps, and dozens of new Req packs. It is the first of numerous free updates that 343 plans to release for Halo 5 over the game’s lifespan. This type of strategy is new to most of the industry and we can only hope that it becomes the standard.  Halo 5 set a franchise record selling 400$ million mico-DLC sales in sales in its first month, and it also features a franchise first pack system for purchasing Req packs which give bonus weapons, armors, and weapon skins, similar to Counter Strike or Fifa. The full live stream is below, but the long and short of it is that forge mode has been completely reimagined and there is a reveal that we have at least one forge mode in space tiles, something that didn’t exist in previous games.