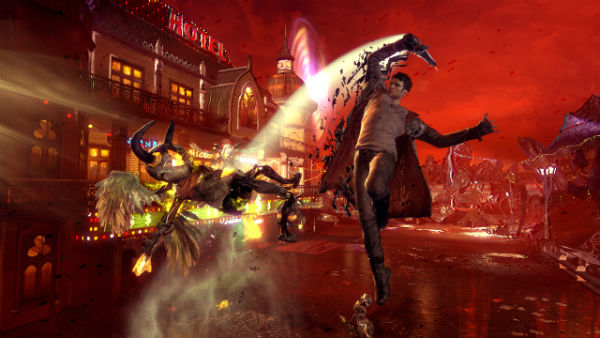 Ninja Thoery’s take on DMC has been quite polarizing given Capcom’s decision to reboot the franchise. After playing through a full tutorial and boss fight I can say with certainty that Dante’s form may have changed but he is bringing all of the style and sass you expect.

The one thing I really took away from our time with the game was the impression that Ninja theory has nailed the core gameplay while making minor adjustments. If you’re worried that Dante’s classic maneuvers like juggling enemies and pulling off fancy moves are missing or some how altered, I can tell you they are all accounted for.

This becomes really apparent with the gun play. Whether we were slicing enemies using Dante’s sword or suspending enemies with a cushion of bullets, everything felt smooth. As we navigated the gothic city streets, Dante’s acrobatics  stayed true to form with his fall speed slowing down as he plastered enemies full of holes. Running along the walls and platforming was also very responsive, although it remains to be seen how well the gameplay fares outside of a brief demo.

I can’t wait to fill Dante’s shoes again when the full game ships in Feb ’13, The demo also did feature one of the series’ large scale boss battles but due to the early state of the game there wasn’t much to say in regards to it. The boss battle followed the action trope of dodging attacks, learning patterns and exploiting a weak point.