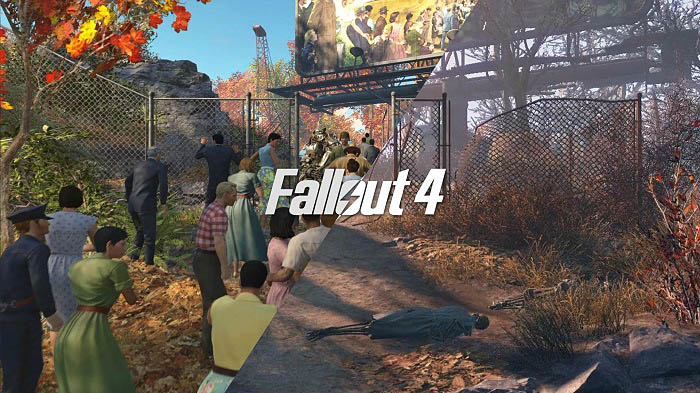 How I Learned to Stop Worrying and Love the Bomb

So, here we are: I’ve had this game for a full week and even the acquisition of NHL 16 hasn’t slowed progress any… that’s saying a lot because I’m a humongous hockey fan. It’s been a long time and the path through the Commonwealth has been fraught with small victories and huge losses and while Fallout 4‘s improvements made themselves apparent right away, a lot of the franchise staples have made themselves apparent as I, finally, start to embrace the main quest line that the game has set out in front of me. 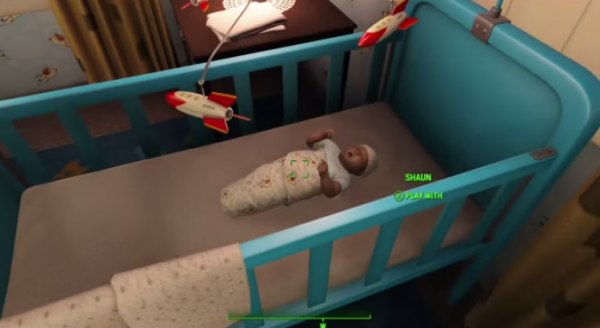 So, I don’t think I’m spoiling anything, really, by stating that it would seem your main quest is to retrieve your infant son, Shaun, who was kidnapped when you were brought out of cryogenic freezing after two hundred years. You got a good bead on the man and his accomplice as they taunted you as they committed the act. You set out from the Vault you were stationed in to find the man who kidnapped your son and get revenge. Of course, you can’t just set out without nothing to your name but your Vault Tec uniform so… you have to do a little bit of scavenging first. That’s where it’s easy to get lost: between building up my settlements, playing the role of everyone’s favorite Minuteman, getting established with the Brotherhood of Steel – a group I’ve not affiliated with in this franchise until now – and doing missions for them, and just generally running around blind, I’d almost completely forgotten to check out Diamond City and see if I can figure out what to do in regards to my mission to find the boy.

Diamond City was exactly the place to get started, too, in typical Fallout fashion: it seems to be the primary hub for activity in the Commonwealth. I had actually come there due to the fact that throughout all the settlements, all the locations that I’d discovered, health supplies weren’t as abundant as I was expecting and radiation was piling up. I was actually trying to avoid Diamond City due to the fact that I feared I wasn’t ready for it – New Vegas is partially responsible for that as I was not prepared for what led up to the New Vegas Strip – and knowing there’d be a doctor there absolutely insisted that I go. Aside from a clearly classist and shady as hell mayor, Diamond City wasn’t actually too bad. There were a lot of tensions regarding synths and suspected synths but seeing as I wasn’t one myself I didn’t think I had much to worry about so long as I didn’t go out of my way to piss anyone off.

That being said, the story portions that were undertaken in Diamond City went off without much trouble, too, and were quite enjoyable; this is where the Fallout franchise really showed its roots in this game, in the story progression and its pacing: there’s one guy who would be of most help to you in your quest but that guy is in dire need of your help in some way, shape or form, so you need to assist said guy in order to retain his services and his quest chain is, more or less, more of the same. I’m still a little sore from not having as many conversation options but I’m feeling things are going well.

Fast forward to where I’m at now and I just witnessed the Brotherhood of Steel’s main airship, the Prydwen, fly on up to the Commonwealth like it wasn’t anything at all, and made their declaration very clear. They’re here to eradicate the synth threat in the Commonwealth, so figuring that it was somewhat relevant to my cause, I’d spend a little time helping them with theirs.

The point here is that it’s moving along at a pace that I can respect because I choose how fast or slow it moves along and every action has a consequence and a reward. It’s pretty fulfilling once you see how everyone reacts and it feels a lot more human than past games as there’s a lot less of a right-or-wrong way to go about things: it’s a lot less clearer how people will react to dialogue choices sometimes and I can appreciate that. 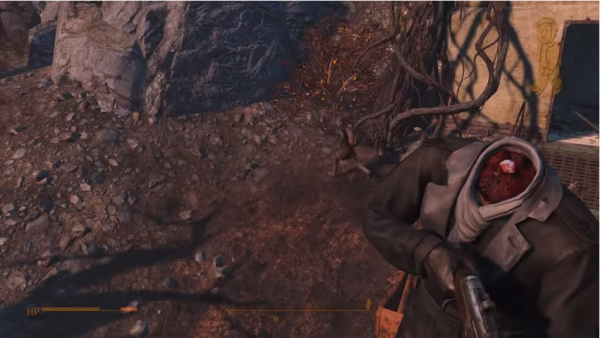 Sir, Your Bethesda is Showing

Oh, boy. Well, it had to be addressed eventually: there are a wide variety of physics-related and visual glitches and those are becoming more and more apparent as the game goes forth. I mean, there’s been tons of reports on what’s going on in glitch land but I’ve really only experienced very mild visual glitches on my playthrough, so far: those being the camera switch problem I’ve mentioned before and the periodical floaty object or person. There’s some clipping but that’s more of a camera positioning problem more than it is a visual glitch. Outside of that, I have noticed some problems that people have gone on about and I feel that I should probably talk about them here as they should be talked about:

So, there’s been some talk early on of a game-breaking bug set that pretty much crashes the game with no real ability to report it – meaning no errors are presented for PC players and PS4/XB1 reports go off to Sony and Microsoft empty – and it’s turning a lot of heads because this is kind of a broken thing even as far as Bethesda games are concerned. Most of the bugs that run in line with this have workarounds but there’s been a few instances where, after a certain point in the game, going to Monsignor Plaza with a certain quest in tow just causes the game to crash and that’s about the end of it. Bethesda and major game media outlets are aware of this and the developers are likely hard at work trying to figure out what is causing this and what they can do to fix it.

There’s also this silly-as-hell glitch that happens when, in a single fight, you sustain a certain amount of head damage without dying – the chances of this happening without you dying seem to be slim, but I’ve not been able to reliably test this – and if you manage to somehow keep yourself from dying while sustaining this damage, your head is capped clean off but you’re still walking around. It’s pretty amusing but it seems that there’s no real way to get your head back and you’re stuck without a head for the remainder of your playthrough. Like I said, I haven’t been able to test this one but it’s pretty amusing. 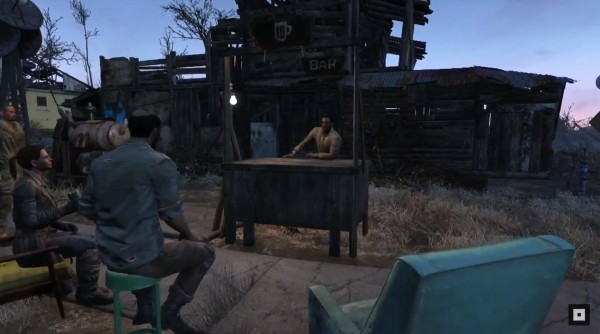 This is what Fallout Shelter was preparing me for all that time: how to care for and handle a small core of people who need my help in the great Wasteland. Whereas Shelter took place in a nameless Vault with all the basic amenities, your settlements are something quite different and, to me, are one of the most fulfilling things in the franchise, to date. Whereas you were always given a goal of making a choice that can change the fate of the Wasteland, your goal in this game is much more personal and the greater effect you can have on the Wasteland is actually entirely more optional and, as such, gives you the greatest control over it: establishing, assisting, and building up settlements is finally a way where you can actually see the work you’re putting into making the Commonwealth a better place for its people. Where in past entries you kind of had to make do with going to already established settlements and seeing what good you could do there and its rewards are fairly limited, especially in earlier entries to the franchise, you have a very real and living community of people to look after that starts out small but eventually becomes huge and… well, while I haven’t gotten to the point of huge, yet, I know I’m getting there and it’s absolutely breathtaking for me to watch as my settlements grow and thrive.

I haven’t even gotten to the point where they will actually benefit my game progression; it’s strictly form over function at this point for me and it feels great. I’ve sustained a couple of attacks so far but I fear they’re only going to get worse over time and I’m going to have to start preparing myself thusly…

There is literally so much that I can do in this game and I was skeptical at first when Bethesda claimed how much time and effort you could potentially put into this game but, much like Metal Gear Solid V, the living, breathing world you build up and nurture could very well offer endless possibilities and keep the replay value up so high that the game may never be put down permanently. It’s absolutely marvelous to see more games doing things like this.