Beware of Spoilers: Halo 5 Retail Copies May Be In The Wild | Broken Joysticks

Home / Beware of Spoilers: Halo 5 Retail Copies May Be In The Wild

Beware of Spoilers: Halo 5 Retail Copies May Be In The Wild

Spartans be on alert because it seems like retail copies of Halo 5: Guardians may have found their way into the wild from the retail supply chain ahead of the game’s October 25th release date.

Akai, a member of the NeoGaf forum, posted an image taken from IMGUR that shows what looks to be a shrink-wrapped copy of Halo 5: Guardians for the Xbox One. Unfortunately no pictures of the disc or included leaflets were posted so its authenticity is subject for now.

It is not uncommon for the games media to receive copies of games well in advance, often these copies are retail builds or in some cases with larger games very controlled digital downloads if it’s a larger title under NDA. It is unknown if the copy shown in Akai’s images are simply pictures of a retail copy provided for review as no receipt was provided with the pictures.

This isn’t the first time a Halo title has been leaked ahead of release. Pretty much every major game in the franchise has been leaked since Halo 2. According to IGN’s extensive piece on the history of Halo leaks Halo 2 was leaked nearly 3 weeks before its release. Halo 3 faired a little better by only being leaked onto pirate sites a week before release. Halo: Reach leaked almost a full month before release and 343 Industries first Halo title – Halo 4 – leaked in mid-October of 2012.

If you’re planning on surfing the Halo sub-reddit, Twitch.tv or other popular Spartan gathering places beware because spoilers may be coming soon. 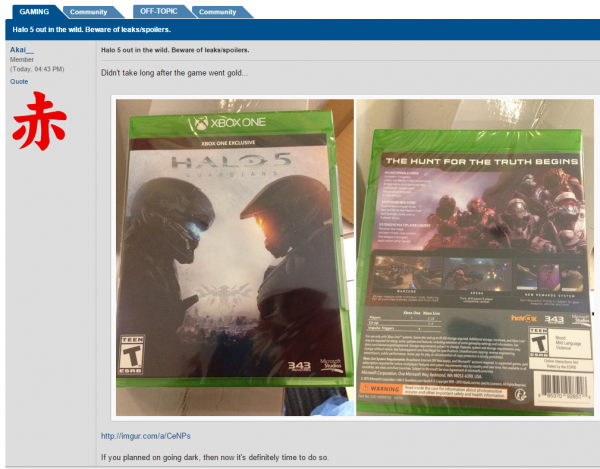