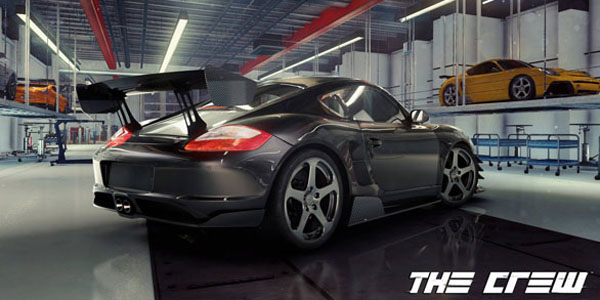 Ubisoft is being incredibly generous to us with promotion of The Crew, a new racing title coming this November. First off, it should be noted that upon the end of the beta, myself included, many stormed the forum for the game demanding more time. It is that good of a game. Picture a serious career story that unlike open world games where you can get out of your car like Watch Dogs, you’re stuck in the drivers seat but treated to tons of plot development.

The hero is an interesting character, out for revenge and working for the FBI to do it. He also looks like a mix between Gordon Freeman and a sort of Walter White vibe. When you’re first dropped into the game, it’s actually quite a jarring experience. I was watching a cut scene and then realized I was in control of a pickup truck rocketing through open fields south of Detroit with a heavy police pursuit going on. Fortunately you get comfortable with this transition quickly and it does make for a fantastic intro. Everything is very smooth in terms of cut scenes to racing. You’re eased through the story and then see a pan out to your car which drops right into the action.

Story mode is a treat. Sure I’ve cared about racing games before and their stories, but I really wanted to keep playing The Crew to see what would happen next. My only issue was that after you start getting into your missions to climb gang ranks so you have a chance at taking on the guys you’re out for, that’s when ‘crews’ are open. I’m sure it’s great to team up with three other racers and adventure across America, but for the focus of my beta time, I avoided that for the time being. I wanted to explore on my own and see what the world was really like outside of story mode. After all, that is what the game seems to be most promoted for.

For a bit of history, Fuel was one of my favourite racing games. If you haven’t checked it out, you definitely should. It’s an open world game as well, but more so in a post apocalyptic sort of “taken over by nature” setting. Long stretches of roads and spiderweb across terrain that is still travelled by big rigs and such, plus of course other racers. In a way, The Crew feels like a different take on Fuel. For the enjoyment of racing through a desolate wasteland in Fuel, instead The Crew plunks you down in modern times with a condensed but still huge version of America to explore. How big? I started into the mountains and set a way point near the opposite top left corner of the map. Cruising along I finally took notice of my distance I still needed to travel. 66km. Okay so it’s a number in a video game. Sixty-six kilometres. But then I started thinking about that. The car is going at a certain speed. The game isn’t fudging the numbers to make that speed faster than what it is (at least to my knowledge, and after racing on, I don’t think it is.) So no, you’re really taking about driving 66km, 41 miles, for one chunk of road in the game.

When I was driving, I did become concerned that things would be quite similar as I travelled on. They’re not. I even found a location that unlocked an achievement or some sort of in game congratulations. That is what I want more of. Again, back to Fuel, they had barrels of fuel that served as your currency for the game. You’d run these over to collect them. It doesn’t have to be anything like that, but a reason to explore America in game would be a great encouragement to use free roam more than just the occasional trip wandering around.

Game progression determines what challenges you can try out while you’re driving around. This was a bit of a downer with early game free roam I found, since you’ll pass tons of markers that you can’t interact with. It does make sense though since you earn car parts by completing these challenges and if they just allow you to do challenges that are too hard, or offer you a chance at ridiculously overpowered parts for your current progression, it would break the enjoyment for many.

I have to admit. It felt that there was lots to explore, and that’s good! Think about good old Pilotwings 64 and the neat things you could discover wandering around their version of America. Instead this next gen title allows you to wander across vast parts of the USA and visit cities and landmarks along the way. That is another thing too. Much like Ubisoft titles Assassins Creed and Watch Dogs you do find landmarks. Mostly in The Crew they are overviews so far that show a mix of angles. So yet again, more collectables. Awesome!

Day and night do shift as you drive around the game world, or fast forward for your next mission you’re about to attempt. Of course as you make progress as well, you’ll unlock fast travel which will make your life much easier if you’re just trying to skip to a favourite race spot.

This was a beta. But I think many of us would have been happy if it was a completed title we had just purchased and were sitting down to play through. The Crew is massive amounts of fun in an open world with great driving physics. I found it easy to control with a game pad and it’s a game I’m sure will be a huge title this November.