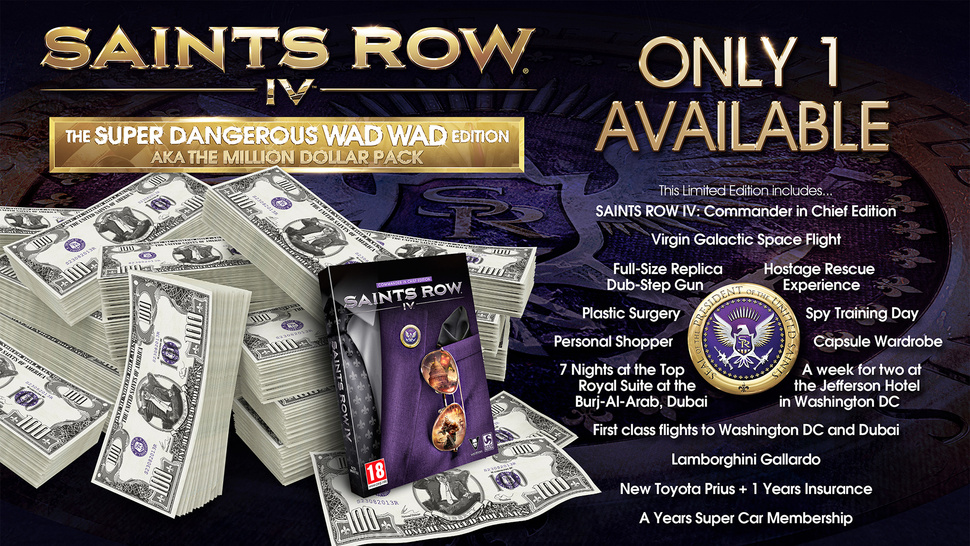 Multiple special editions of new games are nothing new but can we interest you in a one-off collector’s edition that will cost one million dollars? What first seemed like a joke, Saint’s Row IV: The Super Dangerous Wad Wad Edition appears on UK retailer GAME’s official website.

For a cold million dollars The Super Dangerous Wad Wad Edition gives you the rock star treatment in a number of different areas. In addition to the commander & chief edition of Saint’s Row IV , a replica dubstep gun, highlights of this one-off package include plastic surgery of the buyer’s choice, a Lamborghini Gallardo rental good for one year, a stay in Burj-al-arab and a trip to freaking space courtesy of Virgin Galactic

I’m sure someone will shell out the $1,000,000 for this package considering there are people out there who admit to paying upwards of $500 a month on mobile micro transactions. Even if this off the wall edition doesn’t sell it’s a great PR move and certainly please fans.

Here’s a full list of benefits, as provided by Kotaku: