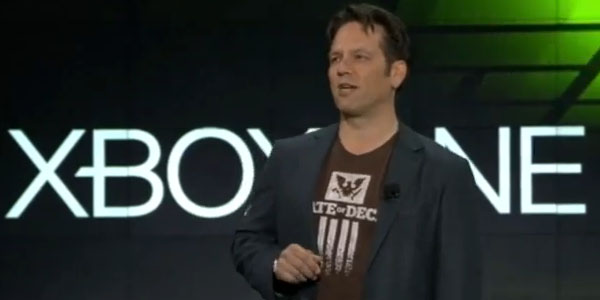 During the intro to Ryse, which looks absolutely fantastic, Phil Spencer who is head of Microsoft Studios was wearing a State of Decay teeshirt. I realize this is really missing the point of the tons of news that was released during this press conference, but it was cool to see a nod to XBLA’s latest game by Undead Labs.

Of course, many of us are anticipating Last Of Us which releases tomorrow for PS3. It’s possible to speculate that State of Decay was a way for Microsoft Studios to give their fans a zombie game exclusive to their console. Especially considering it was released a week before Naughty Dogs huge triple-A title.

On it’s own, State of Decay is a very enjoyable, open world zombie survival game on Xbox Live Arcade. Last Of Us will surely be HUGE news tomorrow, not that it hasn’t been already. We’re very excited for Last Of Us and our own Rae Langdon has already been playing the game. It’s good to see Phil Spencer supporting the latest Xbox serving of zombie action though before surely Naughty Dog takes the spotlight at E3 tomorrow.

Capcom did follow up with the announcement of Dead Rising 3 however as well, but that will be an Xbox One title which we will touch on in another article soon!