We’ve done a lot of reporting on the PlayStation 4 these past few weeks and now it looks like images from the unannounced system’s development kit are starting to pop up all around the web. From destructoid to gametrailers, anonymous sources have given the world its first look at two different prototypes for the PS4’s controller.

The controllers design pays homage to the Dualshock design of the past and, as rumored, adds a touch sensitive pad, similar to the one on the back of the PlayStation Vita, to the face of the controller. The grips on the controller, as well as the overall casing, look a little more ergonomic and rounded. Commentators have also pointed out that the sticks also feature indented thumb-sticks, but this could be a result of Sony using cheaper parts to prototype their controller. Both controllers plugged in via USB but they were both said to be early prototypes, one featuring the distinct glow featured on the PlayStation Move.

Sony is expected to unveil the PS4 at their “See The Future” event in New York city on Feb 20th. Check out a picture of the prototype controller after the jump. 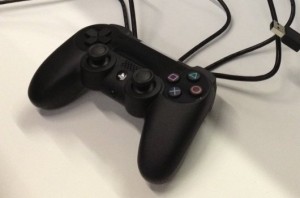