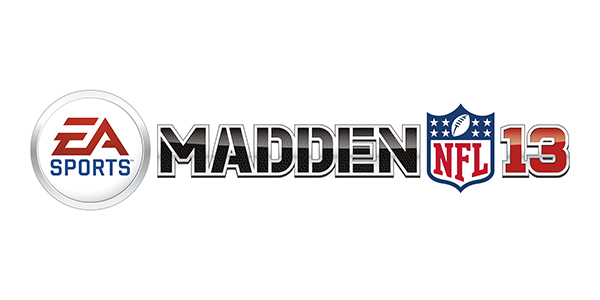 Just as the sun always comes up in the morning, there’s a new Madden game out every year. Back when Madden NFL 12 was released, I heard some people mutter the words, “another year, another Madden.” Admittedly, I haven’t played a Madden game in a while (in fact, the last game I played was 2005!), but this year’s edition definitely feels like it tries to break the mold that’s built up on the franchise over the years.

Now, before we go any further into this review, I’d like to point out that I’m reviewing the PS3 version of Madden ’13. If you want to know about how the game runs on other consoles, I’m unfortunately not the guy to ask. With that said, once you pop in the disc into your console, you’ll be treated to a scene of Ray Lewis (a famous linebacker for the Baltimore Ravens) giving a motivational speech, pumping you up for some good ol’ American football. Unfortunately, the game immediately follows up with a notice stating that it has to install data onto the HDD, probably killing whatever excitement you had (it certainly did for me). By the way, as much as I respect Lewis, I couldn’t help but wonder why Calvin Johnson, the man on the game’s cover, wasn’t the one talking.

Nitpicking aside, you can expect a variety of football-related activities to partake in with this year’s Madden. Of course, there’s the usual stuff like playing pick-up games, screwing around with game settings, Ultimate Team (where you construct your personal dream team), and online. Speaking of online, it’s as solid as it was last year. Matches don’t seem to take too long to start up, and they run smoothly for the most part. You might have some trouble with punting and kicking (they require some precise timing), so keep that in mind. 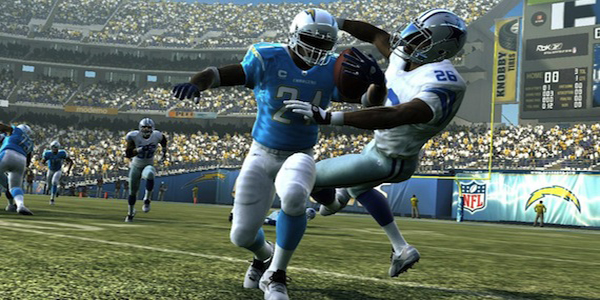 When you’re not busy competing with others, you can search for communities, or create your own group to play the game with. You can also participate in online leagues with up to 31 other players. One new feature in this game that I’m sure many online league fans are excited to have, is the ability to end a week if everyone in the league enables an option to automatically give permission to the owner to proceed.

If you’re inexperienced with the game (like I was), then you can check out some online tip videos that it provides from the Gridiron Club mode. I actually didn’t see any during my time with Madden NFL 13, but it did claim to have them, so I can only assume that EA will add them eventually. Alongside the tips, you can also watch a few recent videos from NFL.com. If you’re interested in fantasy football, then you’re in luck, because you can check on your team on NFL.com while playing the game. The Gridiron Club also allows you to relive some recent impressive NFL moments with the game. The best feature in the mode (for me), however, is updating the game’s roster so that it’s up-to-date with the actual league’s.

Ultimate Team has you starting out with a starter pack of cards. These cards give you players, and you can gradually earn better cards (or players) by playing matches, and trading with others. If you don’t feel like going through the grind for coins, then you can purchase card packs with real currency. I wasn’t really too interested in this mode, but I know that some people might dig it. It’s also the only way that you’ll be able to have custom teams in the game (I’ll get to that in a bit). 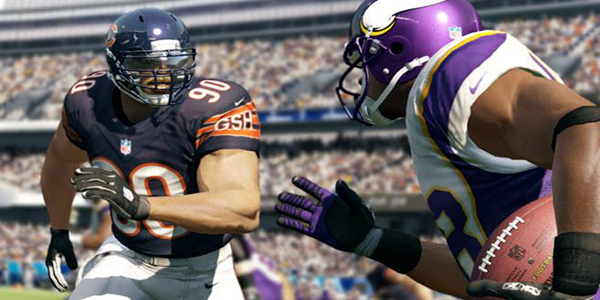 Game Face is a new feature in Madden NFL 13 that allows you to recreate yourself in the game. By going onto EA’s site, you can upload a photo of yourself , or someone completely different (if you’re into that). Then, the game uses that image to create a virtual player. You might not be able to live your dream of playing for a team in the NFL, but you sure can in this game!

The last mode, Connected Careers, is the biggest one in the game, by far. It’s a new feature that provides you with the chance to play as either a coach or a player. As a coach, you have to lead your team to glory by scouting out promising rookies, trading for other players, working with your current squad, and creating game plans against opposing teams. As a player, you can choose how you start out in the NFL. High draft players are very promising, and have tons of pressure stacked onto them to perform well in each game. Low draft players aren’t as well-received, but they can pull off some surprises, and they aren’t nearly as pressured to succeed. Unsigned players are complete underdogs, and need to put in as much work as they possibly can to even be noticed. After you choose how to make your debut, you then have to choose which position to play (there’s quite a lot of tempting options, but I picked a speedy HB).

If you don’t feel like creating a new coach or player, then you can simply start a career as an actual NFL league person. You can control people like John Madden, Vince Lombardi, and Jerry Rice. And for the people who always wanted to play for the NFL, but couldn’t make the cut, you can create yourself with the Game Face feature, and start your virtual road to fame. 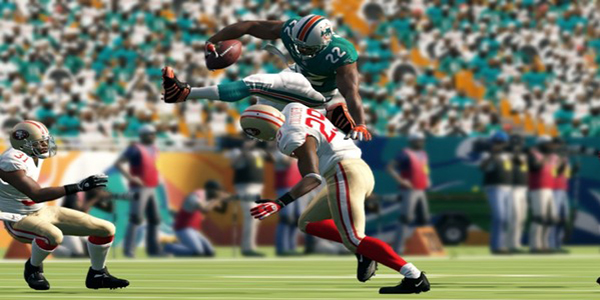 Up to this point, I’ve mostly been singing praises about Madden NFL 13. Now, that’s about to change. There’s a few important things that have apparently been in previous games that aren’t in this game, such as Fantasy Draft and NCAA Class Imports. EA has given the excuse that there wasn’t enough time to include them, so interpret that as you see fit. The lack of a fantasy draft might really hurt the game, though. Online leagues won’t be having underrated teams like the Colts or Raiders, because they simply don’t perform as well as say, the Patriots or Packers. No importing feels like a giant slap to the face for those who were thinking about bringing over players from NCAA Football 13 over to Madden NFL 13.

Now that we’ve covered all the things there are to do in Madden NFL 13, let’s talk about the actual gameplay. People who love the passing game will enjoy the new additions like Total Control Passing (choose where to throw the ball, and when), improved receiver awareness, more realistic AI (no more sudden 180 degree turns to intercept a pass), pass trajectories, and more.

Running advocates may not have received any real treatment this year, but rest assured that it’s still easy enough to pick up yardage by moving the ball on the ground. As always, if you can follow your blockers well, you’ll be able to blaze through, and hopefully make the first down or touchdown. During my time as an HB, I had some running plays that were complete failures, but most of them ended up with me gaining about 9 to 20 yards on average.

There’s an entirely new engine in the game, called the Infinity Engine (named for the nearly infinite amounts of ways that a match can play out). What it does is change how players on the field react to anything that happens to them. Now, players will trip and fall if they run into someone’s legs on the ground. People who’re running the ball can shrug off defenders, and continue to move. Receivers who plan on making jumps for a passed ball might crash down onto the ground. These are merely just a few examples of what the Infinity Engine is capable of. One thing I seemed to notice is that players seem to walk right through benches with players on them. Outside of that, however, the rest of the game looks almost lifelike.

That being said, I have a bone to pick with the Infinity Engine. During my time with the game, players on both teams were constantly falling and tripping over others after a tackle (which you might think is to be expected in football, but not in the way Madden NFL 13 presents it). It’s embarrassing to watch professional football players falling to the ground over just about anything (you could probably sneeze on them, and they’d hit the turf). On top of that, sometimes, a player will sporadically glitch around, and perform random movements, which might even cost you an important game. I appreciate the addition of new physics, but hopefully the developers can refine the engine by next year. 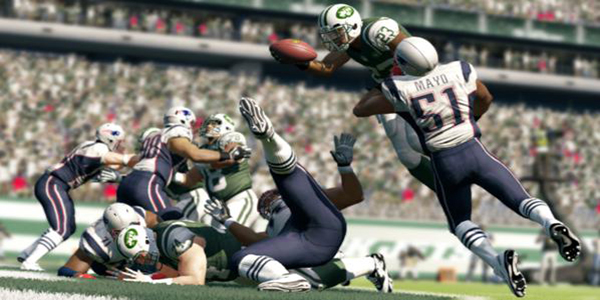 In terms of graphics, the game looks much like the previous year’s game. Is it still enjoyable to look at, though? Yes, especially when there’s weather conditions, or if you’re playing at night. There’s a lot of lighting and details to be found in Madden NFL 13. If a player makes contact with the ground, their uniform will be stained. The various turfs to play on look pleasant enough, with proper coloring and texture. If you’re having problems with knowing who’s who during a game, then you can always up the brightness.

A new commentary team also appears in Madden NFL 13. Welcome Jim Nantz and Phil Simms, who also seem to suffer from a lack of things to talk about just as commentators from past games have. I heard a lot of repeating dialogue in about two hours of gameplay, which is understandably disheartening. The developers claim to have included 82 hours of commentary in the game, however, but it seems that you’ll have to play a lot of different matches to hear all of it. Famous QBs such as Drew Brees and Tom Brady actually sound like they do in real life, and they even have their own unique cadences. 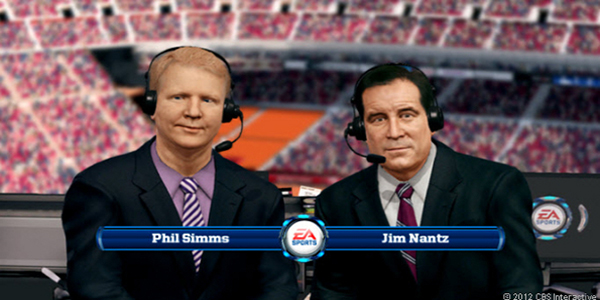 If you’re at the main menu of the game, be prepared to hear the same looping theme over and over again. I would have preferred EA Trax, but it doesn’t appear to exist anymore. Instead, there only appears to be variations of the main theme, so you’re technically listening to one song the entire time. To make up for the repetition of one track, the developers added in new sound clips for crowds and players. You’ll hear new sound effects for bone-crunching collisions and catches (although I, myself, couldn’t really notice the difference between the sound effects in this and 2005)

You may have noticed that I talked an awful lot about the game’s presentation during this review, but Madden right now, focuses a lot on the atmosphere. It tries to make matches more realistic every year. And if you ask me, I’d say the folks at Tiburon did an okay job at that this time. It’s just a shame that some significant features were cut, with a gimmick like Game Face replacing them. Nonetheless, if you love playing and watching virtual football, then Madden NFL 13 is right up your alley.

Madden NFL 13 is set to release on the PlayStation 3, Xbox 360, Vita, and Wii on August 28, 2012 (or August 24, if you purchased a Season Ticket, but the game will be on a three-day trial, meaning you’ll still have to buy the game when it releases). Check out the game’s official website here.