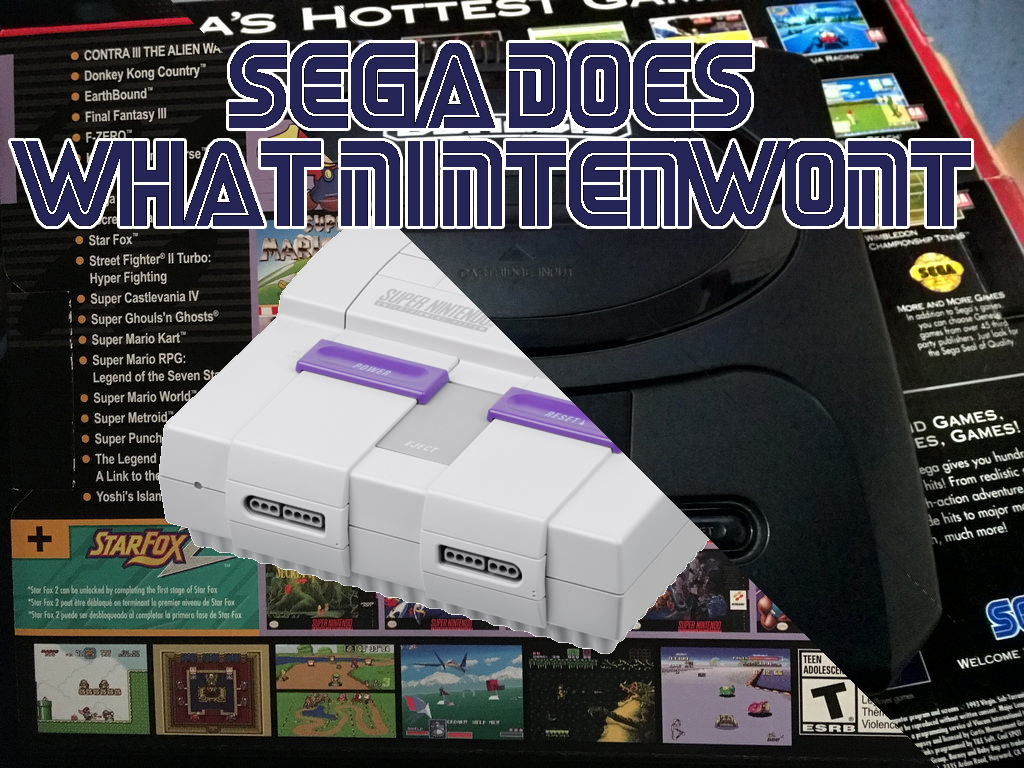 The rivalry between Nintendo and SEGA that was forged in the crucible of 90s  video game marketing has been so exhaustively covered that there are multiple books about the subject (personally I’m partial to “How Nintendo Conquered America” and “Service Games” myself). Twenty plus years onward game companies are still trying just as hard to sell us their products, yes the whole Sonic Vs. Mario thing was entirely corporate marketing to sell a product, “system wars” at its’ core is absolute nonsense. Nintendo’s own Switch Console reveals two very different strategies when it comes to releasing classic titles and in my opinion SEGA is willing to do what Nintenwon’t.

Retro gaming isn’t just the domain of lesser known emulators running on a PC these days, although emulation still remains a viable and valid way to enjoy older titles – they’ve long since found their way onto modern consoles with Nintendo’s Virtual Console service pioneering the idea all the way back in 2006. The packaging of older titles together onto a number of platforms has moved from solely the domain of hobbyists into the mainstream with the accessibility of platforms like Android and the digital distribution that has become the norm. With companies like SNK putting a large swath of their back catalog onto the E-shop and SEGA soon following suit with next week’s release of the Genesis Classics Collection, Nintendo’s three different models of distribution for classic games seem inadequate.

Retro gaming collections are always a bit of gamble for players because due to the sheer volume of titles included there bound to be more than few that are simply mediocre or possibly complete unknowns. In the case of the upcoming Genesis Collection there are the well known standouts: Sonic 1 & Sonic 2, Eco: The Dolphin and Streets of Rage – all SEGA classics. It is doubtful that anyone is purchasing the SEGA Collection to simply play Super Thunder Blade or Vectorman, but for the few lesser known titles in these collections the amount of variety is impressive. Want to play an action platformer? Play any of the Sonic games. Love RPGs? Three Phantasy Star titles and Beyond Oasis have you covered. Want to play a classic side scrolling Beat ‘em up while on the way to work? Streets of Rage I through III are the games for you. 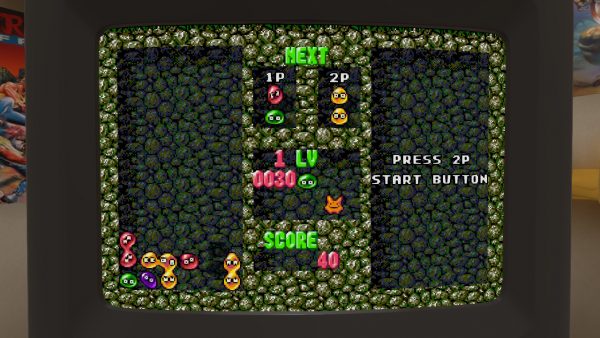 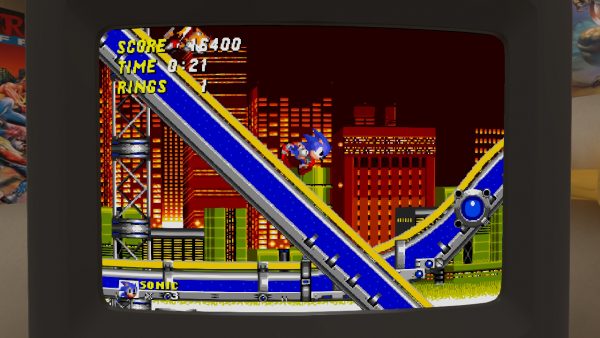 Like it’s release on other platforms, SEGA Genesis Collection’s presentation on the Nintendo Switch is a love letter to the early 90’s to mid 90’s gaming scene that birthed SEGA as the first  rival to Nintendo’s decade plus of domination in popular culture. Selecting which of the 50+ titles you’d like to play isn’t as simple as scrolling through a menu and selecting a game. Instead players are presented with a 3D snapshot of what a 90s teenagers room might have looked like if they’re were a total “SEGA Head”. Posters for Altered Beast and Golden Axe are hastily hung, with the edges curling. A small 13 inch-like CRT television blares static at the player with a shell of titles available to the immediate right. SEGA has taken a lot of care in capturing a very specific aesthetic when it comes to the SEGA Genesis Collection.

During my first few hours with the SEGA Genesis Collection I nostalgically flew through the opening few levels of Sonic The Hedgehog II – complete with A.I Tails sacrificing himself to the gods of speed over and over again. After clearing Chemical Plant Zone, Green Hill Zone and sadly after succumbing to the devilish hell waters of Chemical Plant Zone a few too many times I decided to switch things up a bit (heh!). Scrolling through the virtual bookshelf of games I settled upon Streets of Rage III, a game that I hadn’t played myself but was aware of – sort of. As the cartridge slide into the polygonal genesis and the small television went from static to the familiar SEGA logo, I couldn’t help but remember slipping SNES games from their plastic cases and swapping them out. For those of us who grew up during the 16-bit era or owned a Genesis / SNES, playing the SEGA Genesis Collection is a pleasant dose of nostalgia.

On the technical side SEGA Genesis Collection provides a number of modern conveniences and technical options that didn’t exist on the real SEGA Genesis. Some of these allow for multiple forms of pixel smoothing and up scaling to make the 16-bit experience shine on modern flat screen televisions. Supported pixel smoothing modes include bi-linear, EPX, HD4X and XDQ if those are appealing. For the less technically inclined the option to stretch the Genesis image to 16:9 full screen is also supported – or if you’re more of a purest 4:3 border-less is also available. For me the visual flair that drove home just how deep the emulation options SEGA has included was a virtual CRT television with adjustable viticulture and scan-lines. If you want to recreate the experience of playing the SEGA Genesis on a old, dying, CRT – you can do it here. Each of the 50 games included in the collection also support Quick Save and Quick Load with the flick of the Joy-Con’s joystick. All of the buttons are also completely remappable, something that would have been amazing to have 20 years ago.  Not included are any sort of Game Genie or Gameshark like cheat menus, with an officially supported emulator this robust it’s a bit of a missed opportunity to let player become completely over powered. All and all SEGA’s emulator works fantastically on Nintendo Switch with no noticeable slowdown and a ton of tweakable options to boot. 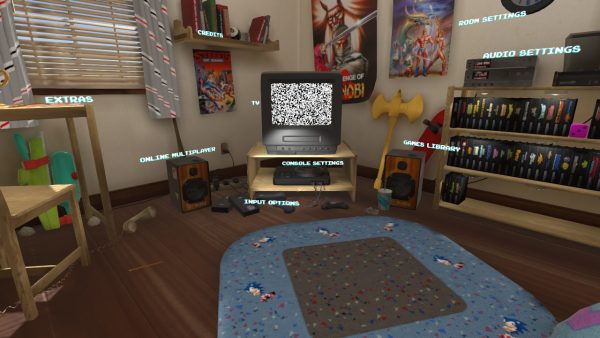 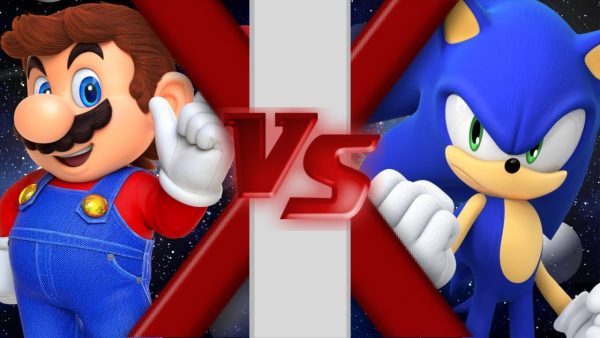 When all is said and done, SEGA has outclassed Nintendo in terms of their classic offerings on Nintendo Switch with the impending release of just the SEGA Genesis Collection. While not every noteworthy SEGA Genesis or even cross-console release is contained within the small 1GB download, the technical features, presentation and sheer variety of titles is leagues ahead of Nintendo’s official offerings via the Nintendo Entertainment System app. Nintendo banked on the low price-point ($20 USD) and Netflix style addition of games over time to sweeten the deal when paid online was introduced earlier this Fall. What we got was a bare bones selection of NES games which have appeared on multiple iterations of the Virtual Console over the past decade+, but with new restrictions like not being able to play them offline after a week because the NES App has to phone home. Honestly, who is looking for classic games and is going to subscribe to Nintendo Online simply to play Baloon Fight for the 100th time?

SEGA took the time to curate a selection of their first party offerings from the 9 years of the Genesis’ life and offer up most of the essentials plus some cool extras. Allowing players to re-map controls, forward and rewind gameplay. tweak graphical smoothing settings and even bypass the technical limitations of the Genesis Hardware puts their offerings miles above Nintendo’s own and on par with the complete cabinet customization that SNK has been offering on their single title Arcade Archives releases since the Switch launch. Icing on the cake is SEGA’s ability to nail down the 90’s aesthic in the menu presentation and the inclusion of in-collection achievements for a selection of the titles available. Did we need two versions of Columns? Probably not, but what they delivered more than makes up for it.

Where does this leave Nintendo? Well most of their big name retro games either aren’t available on Switch because SNES and GBA compatibility hasn’t been confirmed. This means first party games like Super Metroid, Super Mario World, A Link to The Past and others are locked behind aging digital store fronts like the Wii U E-Shop and are not portable. Or trapped forever on a limited number of units of 3DS ambassador units, or lastly, set to be forever unavailable – like Ogre Battle (SNES), Final Fantasy 3 (SNES), Super Star Wars Trilogy (SNES), Clayfighter (SNES / Genesis) and a whole pile of Turbo Graphics 16 games -that will be lost when the Wii  E-Shop goes offline next January. 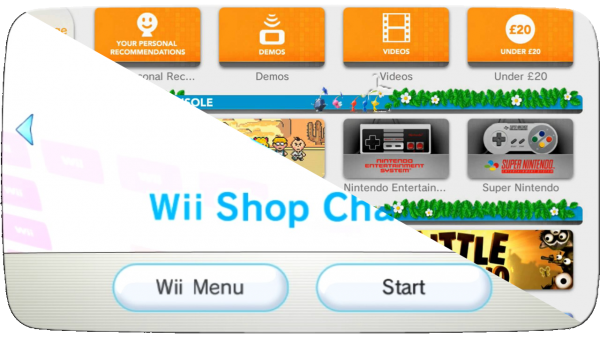 SEGA of America provided Broken Joysticks with an advanced copy of the SEGA Genesis Collection for Nintendo Switch for editorial purposes.