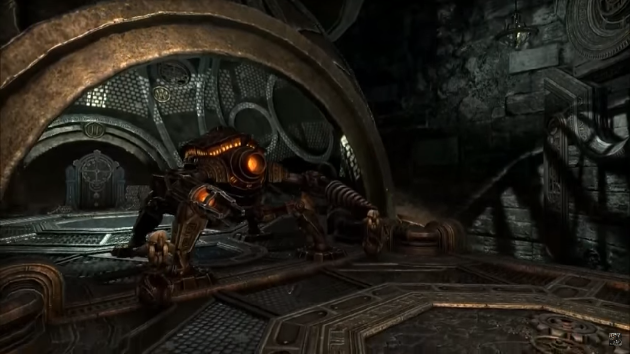 A world of interlocking gears, steam power, golden metal, and robots might sound like a steampunk paradise envisioned by the wildest visionaries of the Victorian age of sci-fi but I’m actually describing the broad aesthetics of The Elder Scrolls Online‘s next major expansion known as The Clockwork City. Owners of The Elder Scrolls Online willing to install the near 80GB Public Test Region’s in-development client can accept the quest to explore the weirdly wonderful world of the Clockwork God,  Sotha Sil.

Here is Bethesda’s brief description of this new DLC zone and how players can accept the introductory quest:

Clockwork City.
Venture to the bizarre realm of Sotha Sil, the Clockwork God and the third member of the Dunmer Tribunal! The machine world is rife with frightening and alien dangers lurking beneath its metallic deserts and artificial trees, where only tiny pockets of citizens are able to carve out a quasi-religious society that values enlightenment and experimentation in emulation of its detached benefactor. A dark conspiracy threatens the integrity of the Clockwork City and signs of a powerful Daedric relic manifesting within that realm draw all interested eyes toward Sotha Sil’s domain. 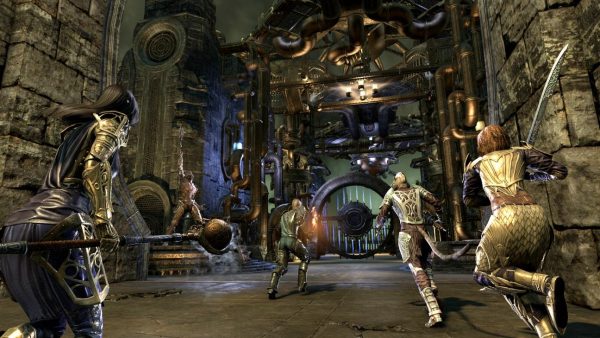 Clockwork City brings brand new World Bosses and explorable Delves for all adventurers to test their mettle. Sotha Sil’s work on The Imperfect God, a terrifying mechanized weapon of death that is always improving is never ending but players will be able to take it on. Players can choose to venture either into the inner-gears and workings of the Clockwork City in The Shadow Cleft delve or explore an artificial environment that has broken down for an unknown reason in the Halls of Regulation Delve.

The Clockwork City is a treacherous place with dangers both native and invasive. 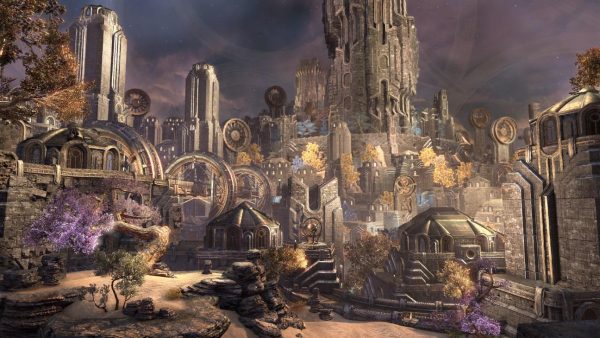 Within the heart of The Clockwork City sits a place known as The Brass Fortress. In this center of power priests and zealous inventors dedicate themselves to Sotha Sil and aim to replace the flesh & blood parts of their bodies with machine replacement parts. The Brass Fortress is also home to those not loyal to the whims of Sotha Sil, these outcasts have become known as The Tarnished.

The Brass FortressGoing to the Clockwork City will eventually lead you to the Brass Fortress, the center of the city itself and the one place that the Clockwork Apostles, dedicated priests, and inventors, work to improve their bodies and minds – sometimes with dubious “replacement” parts! Here, you can find the usual services and commodities.

The Tarnished: Not everyone in the Clockwork City pledges themselves to Sotha Sil. He is a benevolent god, in his own way, and allows them to remain regardless of their lack of devotion. This sub-society of outcasts, transients, and vagabonds are known collectively as the Tarnished, and have made themselves a valuable part of the city even if the Apostles themselves do not always appreciate it. Razgurug, the “mayor” of these downtrodden folk, offers what recompense he can in exchange for assistance to support the society that the distant Apostles will not.

More information about other changes that will be introduced in patch 3.2.0 including new collectibles, new item sets, new furniture, new crafting motifs and updates to the base game & ESO: Morrowind are available in the PTR patch notes. We don’t have a solid release date or price point for Clockwork City just yet but given the fact that Zenimax Online is ready for players to test it, it can’t be more than a few weeks out.