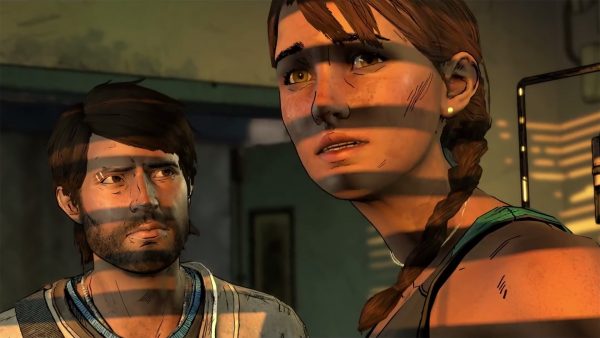 Telltale Games has come out with the newest episode in their Walking Dead series. While the two part opener was good, it needed to really develop our new protagonist in order to live up to the love that the games built up for Clementine or even Lee. Javier is certainly not unlikable, but can Telltale continue its line up of strong protagonists? Can they build up Javier without neglecting Clementine? How will the story of Javier’s group progress and what will be learned about this New Frontier? This mid season episode has a lot of answers and story to unbox. This episode has a lot of story points and character development to look at, and less gameplay aspects to talk about, so minor spoilers are to follow, but nothing that ruins the episode. I recommend if you have played the episodes up to this point, definitely continue despite the lacking gameplay 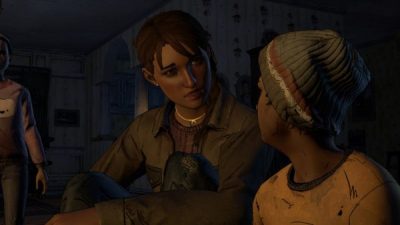 The episode opens up by diving into Javier’s past and how he began to lead the family after his brother David’s absence. We see thatKate is hesitant to take action against the walkers and the kids are hesitant to leave without their father, but you must make the hard choice of either staying and risking the walkers becoming too numerous and overwhelming or leave and hope that David finds the group later down the road. His conversations with Kate and the kids when deciding how to handle their uncertain future offer quieter, but essential moments that help enrich the characters and offers some insight into how they ended up in their present situation and why they might feel the way they do. Getting this insight and character development really shows how much Telltale cares about their protagonists for the Walking Dead and puts at ease concerns that may have risen about switching protagonists for this season. We see how hard it is for Javier to take the leadership role, how hard it is for Kate to protect her loved ones while seeing such gruesome sights and how hard it is for the children, especially Gabe, to leave their father behind. 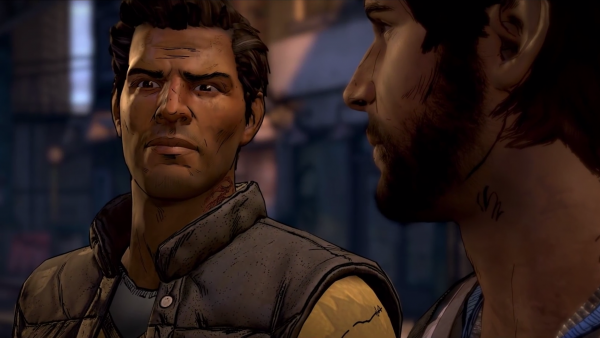 We also get some insight into what has happened to Clementine and her time with The New Frontier. We see how she got her tattoo, how she became a loner again after finding some stability and what choices she had to make to save her only remaining ties to family. A major discovery happens concerning AJ and we see that Telltale has not given up on Clementine or her story regardless of the change of protagonists. Clem is still as interesting and even heartbreaking a story as ever. We learn more about the connection between Javier, Clem and the New Frontier and the title “Above the Law” becomes very clear as we go deeper into how The New Frontier works. As the trailer for the episode showed, David reunites with his family, creating some hard choices for the family. Do they accept David back? Do they side with the New Frontier now that they learn David is involved? You need to make your own decisions and judgments after some investigation and conversations. There are some interesting developments, but it soon becomes a bit convoluted and frustrating when dealing with some dubious characters. There were times I even went against how I normally would respond in order to take a more aggressive action as opposed to a diplomatic response because of my frustration. The plus side is that this lead to some interesting responses from those around me.

Overall, this episode was wonderful for the character development and bonding with our new protagonists, but somewhat lacking in the rest of the departments that would have knocked it out of the park. There is certainly no reason to give up on this season or The Walking Dead now, so play for yourselves and discover why some are “Above The Law”.