I’ve played my share of runners with most of them being the endless variety. You run and run, avoiding enemies or other obstacles until you eventually fall. You try to beat out your top score or the scores others on a high score chart. But while Polara is a runner it’s not in the endless variety, which gives this game much more lasting power and makes it more satisfying to play.

The year is 2140 and a civil war rages between the upper and lower classes, resulting in a militant defense initiative nation wide by the governing bodies. In an undisclosed laboratory deep within the urban capital, Lara, and agent ascending the ranks within the Bertram Defense Institute, has been chosen to test a prototype bio-defense suit that protects the subject from the automated defense grid now monitoring and “cleansing” the continent of lower class insurgents.

Lara is contacted by a member of the Civil Uprise and begs her to join them by bringing them the defense suit she’s testing. They show her photos of her deceased father and eludes to the sinister nature of his death, at the hands of the Bertram Defense Institute. After some consideration Lara runs away with the suit at the completion of a training course to join up with Civil Uprise to uncover the truth. 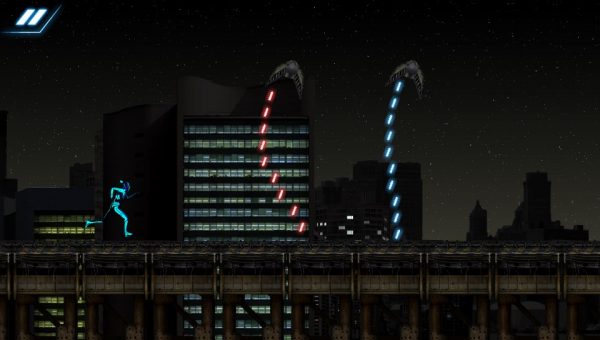 The basic mechanics of Polara are pretty easy, as are the controls. The game is not easy at all, however it is just the right level of hard to keep bringing you back.

Being a side-scrolling runner, the main mechanic of the game is to jump. The game takes care of moving Lara across the screen and while you do jump to avoid obstacles, there is another innovative mechanic which not only adds to the complexity of the game but it also diversifies the adversity facing Lara.

In addition to jumping, which you can do by pressing virtually any button on the right side of your Nintendo 3DS (A/B/X/Y/R) you can also switch up the colour of Lara’s suit from red to blue and back by pressing virtually any button on the left side of the system (any direction on the d-pad/L). The colour switch mechanic creates a huge level of depth to Polara.

One of the main obstacles you’ll face during the levels are various weapons firing towards you, or lasers blocking your path. These are coloured either blue or red, and if your suit is of the matching colour then the weapons will have no effect on you. Bullets will bounce off and lasers won’t harm you. So some quick switching between the colours can keep you safe as you run from left to right.

But there is so much more than that and this is were things get crazy. 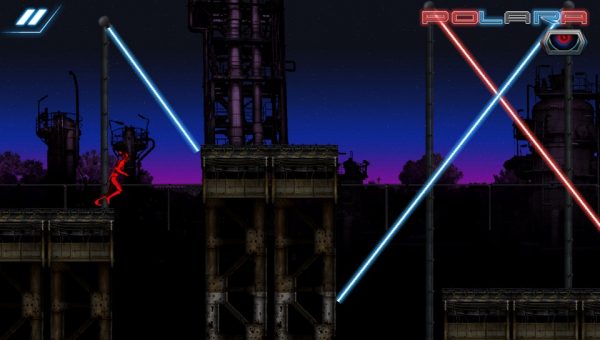 While this is a runner, as I mentioned before, this isn’t an endless runner so there is an end to the running. Polara is broken up into separate levels and after you complete each course you will be shown your stats and can continue to the next course, quite, or play the level over. You will also be shown the number of deaths you had in the level. While the running might not be endless your lives certainly are.

A lot of the game is very fast paced leaving you very little reaction time. As such you can very easily make the wrong move and die. But rather than be given a small number of tries and a very quick game over, the game gives you virtually limitless tries to make it through the deceptively challenging levels. The challenge isn’t only beating the levels, but beating them again with as few deaths as possible. There are sever levels which require very precise timed jumps to get through, especially since you can’t exactly slow down to perfect your jumping.

Another saving grace in Polara are checkpoints throughout the levels. After each series of challenges within a level you’ll pass a little checkpoint beacon to save your progress through a level. A godsend in game design for a game with some truly tricky platforming. I’m sure this will help calm gamers from rage-quitting the game after dying countless times in some levels.

After completing levels you can replay a level and collect the letters “P-O-L-A-R-A” and a token, which can be used to unlock challenges. Polara also has a random level generator (in normal and unlockable hard) which gives Polara unlimited replayability.

There are even boss battles where your reflexes are put to an even higher test. 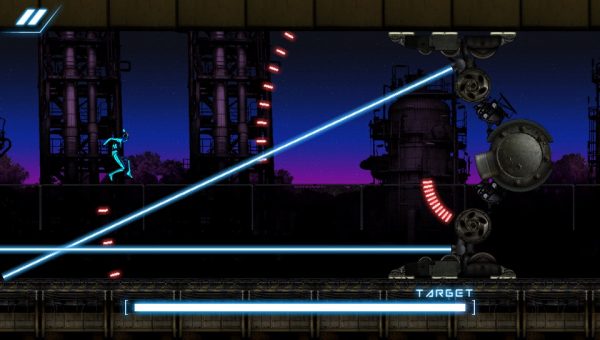 Polara has a pretty solid story which is continues bewteen every ten levels. The look of the game, with the bleak world and bright blue and red colours, really reminds me of TRON. The background are look fantastic and contains a nice depth and animation, though the game doesn’t support 3D, which is a bit of a miss as sometimes the foreground platforms and the background look too similar. Separating these with the 3D layering would have been good. The music is futuristic and energetic, which lends to the intensity and focus you need when playing the game.

To be honest I almost dismissed Polara. The game really looks like an endless runner and to be honest that genre not my favourite. But the twist on the genre, as well as the focus on the game and not on just scoring points, really sets Polara apart. The running in the game is not the game in itself but is instead integral to the story.