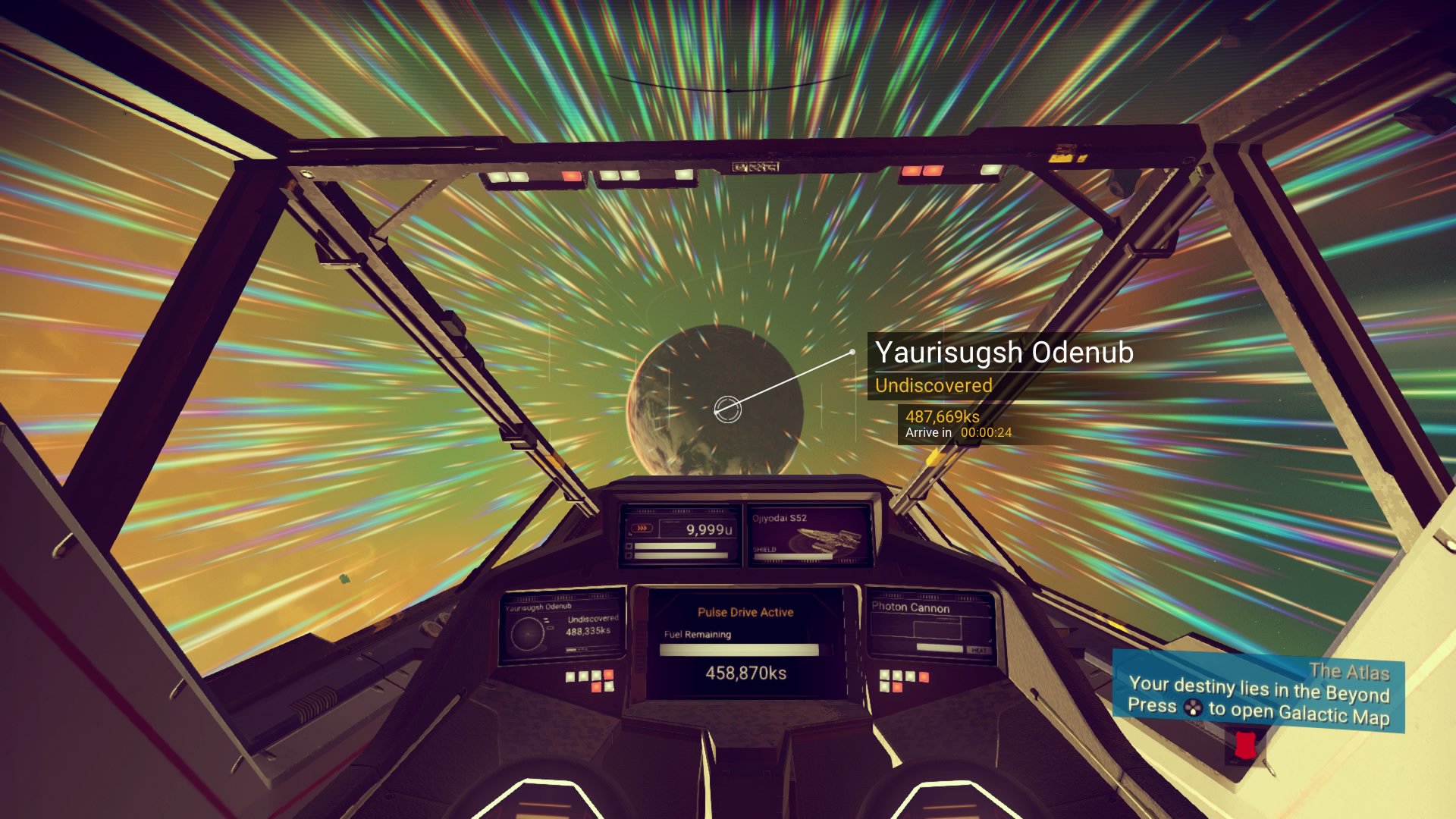 Finally, after all the speculation, articles, and setbacks, Hello Games’ space explorer No Man’s Sky is here. We are finally able to answer the question, “What is No Man’s Sky?” And that answer is – a pretty good exploration and space trading game with minor crafting and survival elements.

It sounds pretty basic when framed in that way, and in words It’s not particularly elaborate. However a quick summary of its genre doesn’t encapsulate the experience well enough. If you’re expecting something different out of the game, or don’t care for what its core offering is, it’s not likely to draw you in.

The exploration itself is at once relaxing and fascinating, with ample opportunities for the game to surprise you with what it presents you. Expansive vistas, crystalline chasms, and vast plains of alien wildlife are all things I’ve spent time admiring. It does get a little repetitive the longer you stay on a single planet, but being able to leave fairly easily helps remedy that.

Starting off with a wrecked starship, the tutorial asks you to gather resources to make repairs to your shit, and ready the ship for spaceflight again. This servers as a tutorial and walks you through everything you need to do fairly quickly. It introduces the games systems and mechanics – primarily the implementation of crafting the game uses – while leaving you some room to tinker as you discover upgrading and modding your equipment. 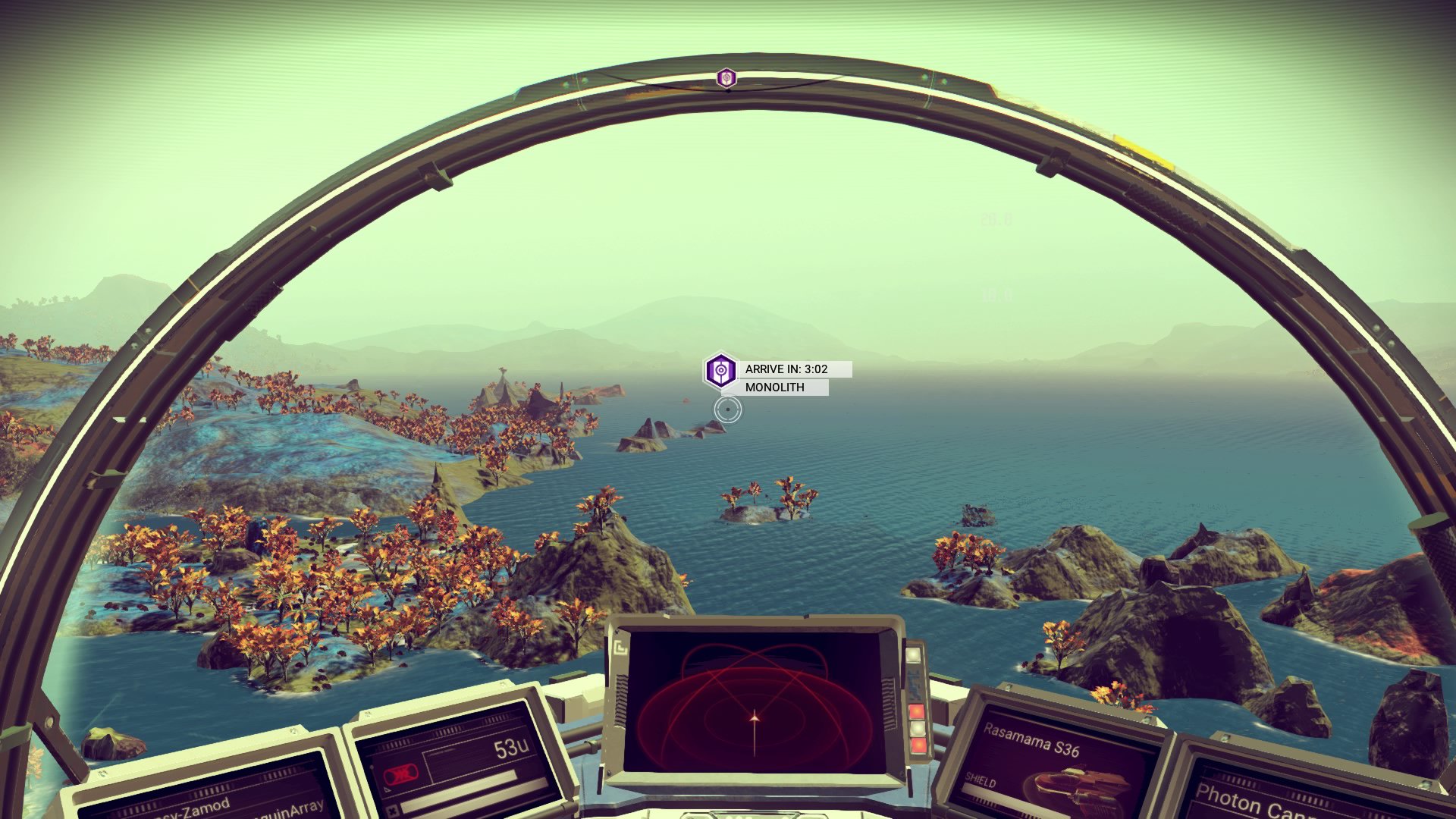 There is a lot of this, going around the world scanning for resources

Inventory management plays a major role in the game. Both your starter ship and first suit have and infuriatingly limited amount of space. You can acquire additional slots and bigger ships through various methods as you explore, but starting out in particular you will run into full inventories fast. Until you find a trade uplink, your only option is to get rid of excess stuff permanently. This makes a lot of early game exploration feel hollow as you can’t keep any hi level resources you find due to a lack of space.

There is an interesting interaction involving the inventory system. When you use upgrades and mods to your suit and ship they occupy an inventory slot. Having to decide between the improvements to exploration and combat or carrying more stuff to sell is not irrelevant, and I found that I would hold off on useful upgrades until I had a chance to offload more of my goods.

As far as combat goes, it is not particularly great. On land, there are drones that analyze the environment, wildlife, and you, and if you seem to be threatening, they will attack. They don’t do much damage, and if you evade their line of sight long enough they will deactivate. The main thing the player can get from them is that  they are made of Titanium which is useful. Shooting them down is easy even with the basic mining laser. 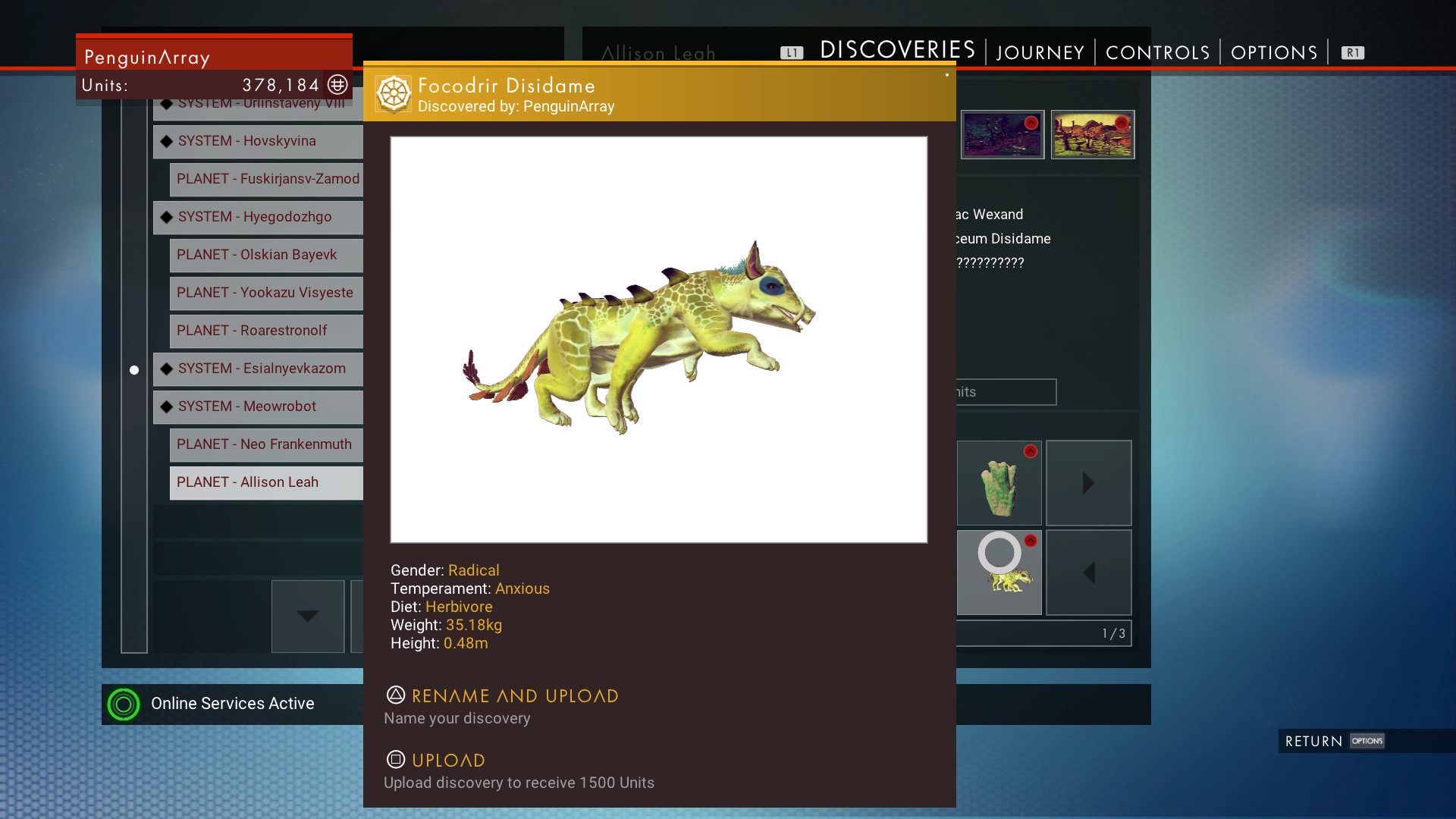 Naming the Animals is pretty fun

Space combat is a different story. Learning how to line up your shots takes some practice, and the nature of starship combat can make it really disorienting until you learn how to read and react to the on-screen indicators. Luckily, you can make repairs on the fly so it’s not unforgiving if you get in a dogfight without being certain what’s going on. You also are given some advance warning of incoming ambush, so you can fly off or warp to another location if you aren’t ready to fight.

Setting off to a new star system is exciting, and I have not lost that feeling of wonder every jump to hyperspace. While you start to notice some common set pieces on the individual planets – abandoned buildings, outposts, and production facilities offer you the same sort of thing on every planet, there are still some surprises to be found. Some of these I wish would be less frequent, because they lose a lot of effectiveness if you see them too much.

Survival elements are technically in the game, but they aren’t really worth worrying too much about. Almost every planet has something dangerous about it – whether it’s radiation or extreme temperatures.  Players will have  you have a meter that measures how much protection you have remaining and a warning will pop up when you are getting low. When that runs out, your life support lowers. Those two are basically your only concerns and they replenish easily. You recharge your life support with Isotope-type elements, which includes carbon (which can be gathered off almost anything that is alive). This effectively eliminates the survival aspect of the game.  Your resistance meter is recovered by finding shelter, either in a building, cave, or your ship. Hopping into your ship takes care of most of your survival needs almost immediately.

The planets I have seen so far have been interesting and diverse in their traits, though I have seen individual elements repeat a few times. I can see them becoming repetitive after even more planetary jumps. However, foe now even the two most similar planets I’ve seen have felt different enough thanks to palette differences. Also interesting is that it took about eight planets for me to find an ocean. Even though I thought I had seen all the games engine had to offer, finding that ocean left me to wonder what else is in store.  There are supposed to be over 1 billion randomly generated planets, with nearly endless possibilities’ the only barrier is time. 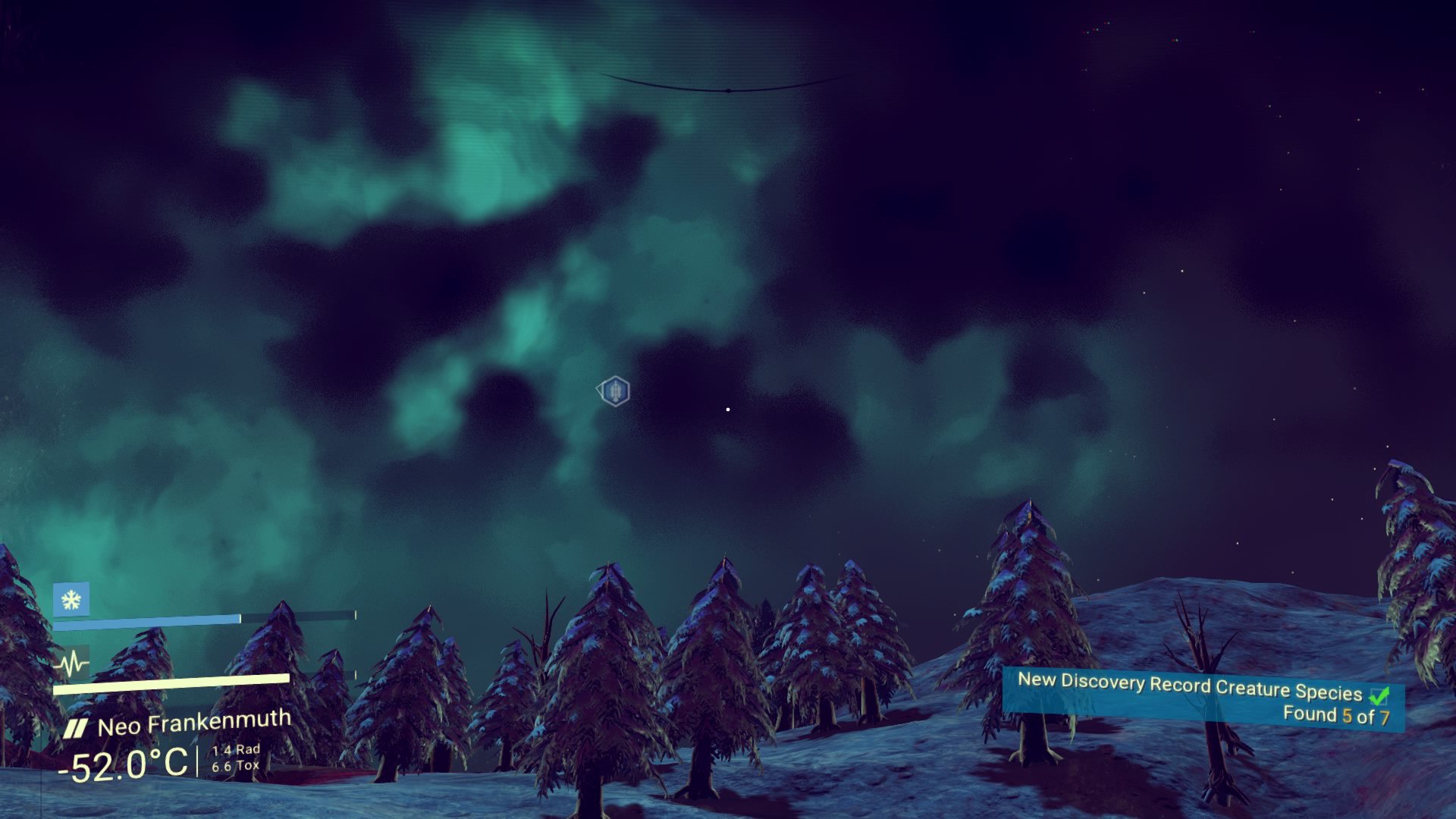 Some of the vistas in this game are absolutely jaw dropping

One of the most prominent and touted features is the ability to name and upload your discoveries. When you do so, you get rewarded in game for your discoveries with cash. This will help you to purchase larger ships or rarer resources. This is not a viable method of income, but it is fun to do. The trouble is twofold with this however. First, your name cannot be changed once you set it. If you make a typo or don’t like your decision later on you can’t change it. Second is there is just so much to name, and I find it difficult to upload something without naming it, as it feels like a wasted opportunity. You may not be bothered by this as much, but I feel that allowing you to alter names later on would remedy both if these.

The soundtrack is incredibly relaxing for the most part, though it gets intense during dangerous situations like combat. The ambient music that plays as you explore feels right and helps put you into the appropriate mindset to let your mind be drawn into the world around you. It enhances the game greatly, and honestly most of it works really great as relaxation music on its own.

While there is something going on in game on a galactic scale, there’s not really a traditional narrative. Instead, as you travel from planet to planet, and encounter more sentient lifeforms, you pick up on some of the history of the beings you encounter. Finding ruins and learning their languages lets you delve deeper into these histories, and I couldn’t help but find myself formulating theories on how events in history may have transpired. These micro-archaeological narratives are actually rather fun to work through.  This is a for sure a player driven game. If you prefer a strong narrative driven game No Mans Sky is not going to be for you. 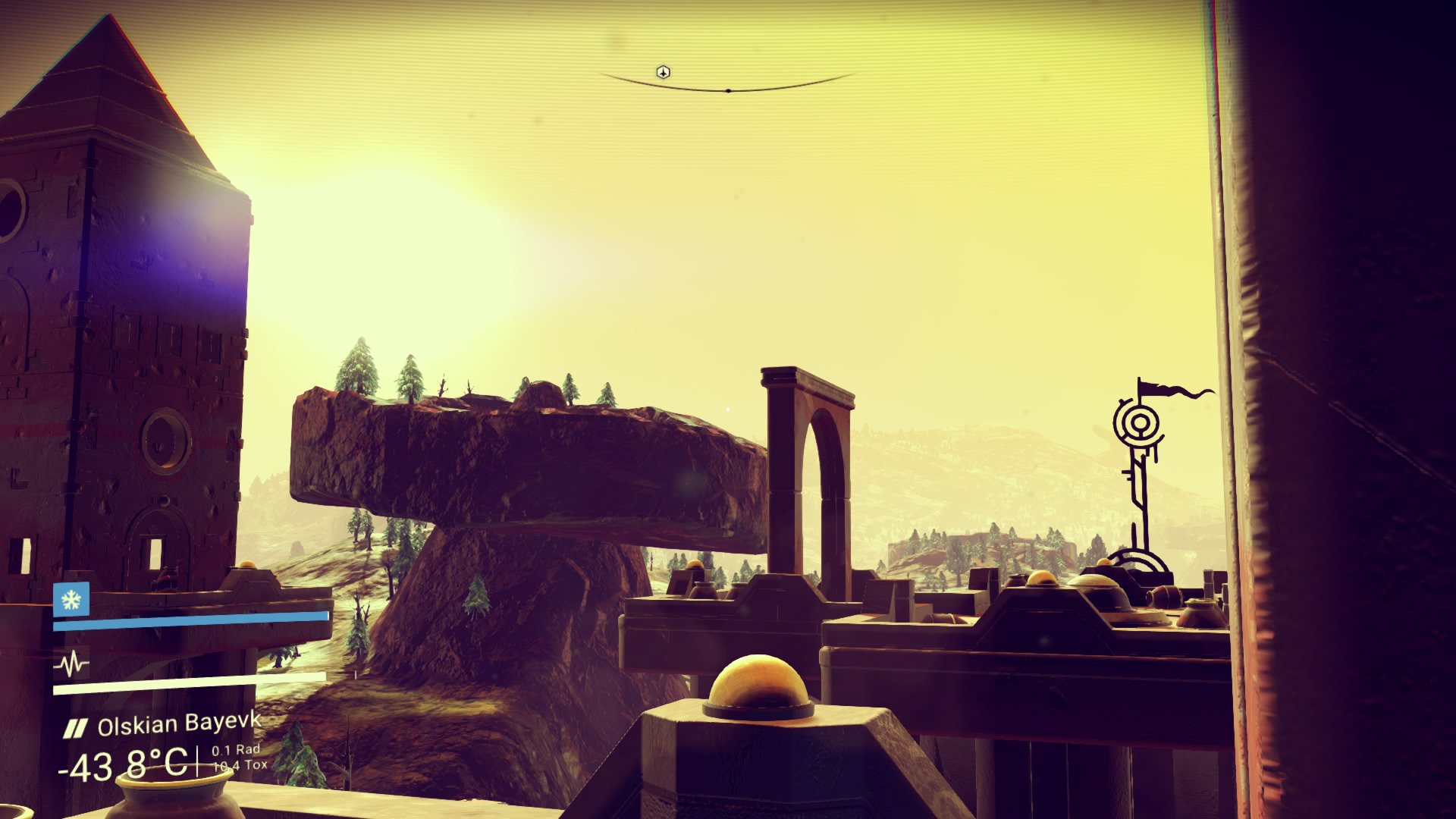 A little less fun with the alien languages are some of the puzzles. You will sometimes encounter malfunctioning systems that ask you for an action to repair them for a reward. These will come with an instruction in the alien language, so if you know the right words it’s trivial to solve, otherwise it’s guesswork. Along with those I’ve seen number pattern puzzles as well, so if you’re put off by those that will likely be a disappointment. Having the puzzles isn’t a deal breaker, but they do feel underwhelming.

No Man’s Sky manages to be both ambitious and expansive, but restrained. It’s a game of moments that can draw you in enough to push you through the more repetitive parts. When its formula works it’s outstanding, and when it doesn’t, the cracks show. It doesn’t really have much to offer people who aren’t interested in the things it does; it isn’t likely to be the game to make exploration and crafting your thing if they’re not already. However, I highly recommend it to anyone who does enjoy this style of play. It may also be worth playing if you are inclined towards space, as it creates some amazing moments as you soar through the stars.

This is a review of the PlayStation 4 copy of No Mans Sky Which was provided by Sony for review.