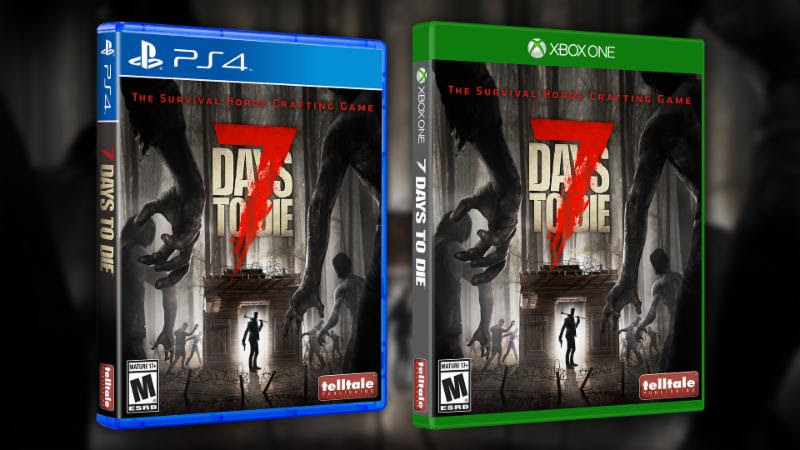 Today is finally the day, Telltale Publishing announced the release of hit survival horde crafting game 7 Days to Die on PlayStation 4 and Xbox One. Telltale have teamed up with the developer The Fun Pimps (yes that’s their actual name), to bring this horror game to consoles.

7 Days to Die is now available in stores at retail and digitally in North America on the PlayStation Network for PlayStation 4, the Xbox Games Store for Xbox One. As an added bonus the game will also be available starting July 1st both digitally and at retail for PlayStation 4 and Xbox One in Europe.
The console version of 7 Days to Die adds a new multiplayer mode supporting local split-screen for couch play. The game will also be supported by exciting DLC content, beginning with a Walking Dead skin pack featuring characters from the Telltale series, set to release in the coming weeks.
Set in a brutally unforgiving post-apocalyptic world overrun by the undead, 7 Days to Die is an open-world survival game that is a unique combination of first person shooter, survival horror, tower defense, and role-playing games.  Players will have to master combat, crafting, looting, mining, and exploration to succeed. This is a particularly fun game to stream and make video content for as its full of fun moments, and exciting adventure.
Steve Allison, SVP Publishing at Telltale, Inc, said about the games current popularity:
“7 Days to Die has already proven to be wildly popular with over 1.5 million PC users worldwide, and we’re thrilled to be expanding this unique take on the survival genre to console players everywhere. The Fun Pimps have created something special with this title. The way the game seamlessly combines elements from disparate yet complementary genres, it all comes together in a challenging, terrifying, and above all, enormously fun experience – one that we’re incredibly excited to bring to a whole new audience on consoles.”