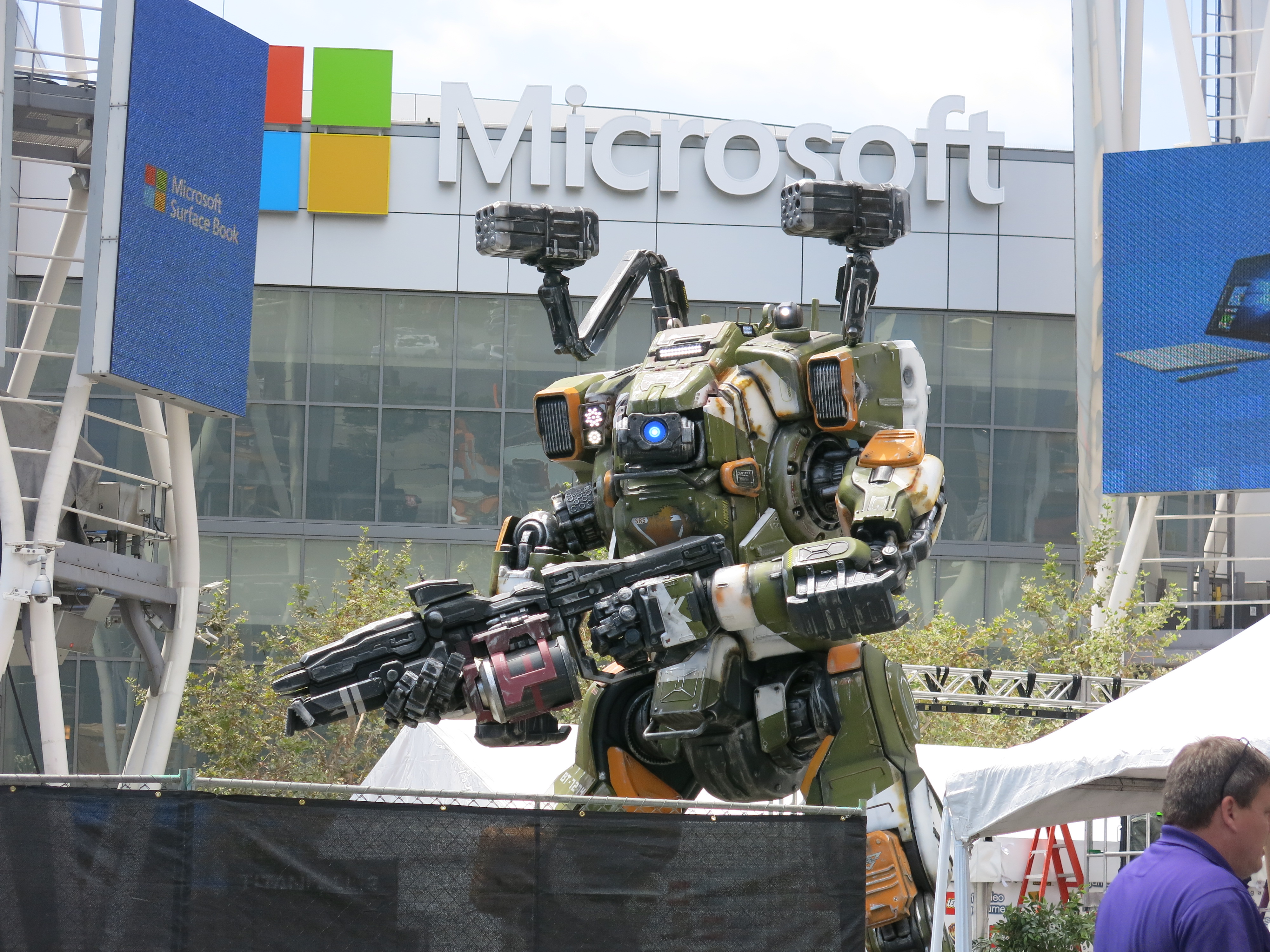 At EA’s new publicly accessible EA Play Event two teams of paramilitary soldiers battle it out for supremacy in multiplayer matches of Titanfall 2. I got the chance alongside our own Fionna Fox to try out one ten minute match during our visit to EA Play this afternoon. Find out why Titanfall 2 looks to take everything good from the first game and some great new mechanics that change how the flow of battle unfurls.

I played one of the two available classes in the EA Access demo version of the game – this class came complete with an automatic sub machine gun and a grappling hook as my class’s special ability. It seems that each class in Titanfall 2 comes with a special ability mapped to the L1 button that is unique to them. Using my grappling hook allowed me to quickly scale up to the rooftop to take out enemy players or NPC grunts / specters with ease. My grappling hook wasn’t just good to get a good vantage point but was also useful as an enemy titan descended from the skies.

Speaking of the giant robots, of course the titans were going to return – their right in the name of the game. While the single-player focuses on the link between the titans and their pilot, the multiplayer’s version of these walking death machines function very similar to their Titanfall 1 counter-parts. The titan I chose for the single match that I played came equipped with a slower firing main weapon that did moderate amounts of damage, my titan also had a shoulder mounted laser that could be charged in a few seconds. The shoulder mounted laser was especially effective against enemy titans, there was at one point during a particularly close encounter that my laser saved my life – unleashing a blast at my enemy that destroyed their titan within seconds of them taking me out.

Titanfall 2 looks to include everything from the original game – Grunts, Mercs & other NPCs, awesome giant robots, fast paced movement – and new elements like the grappling hook and titan super abilities to spice things up. Firefights were fast paced and I could hear my chest pounding as the match ended. 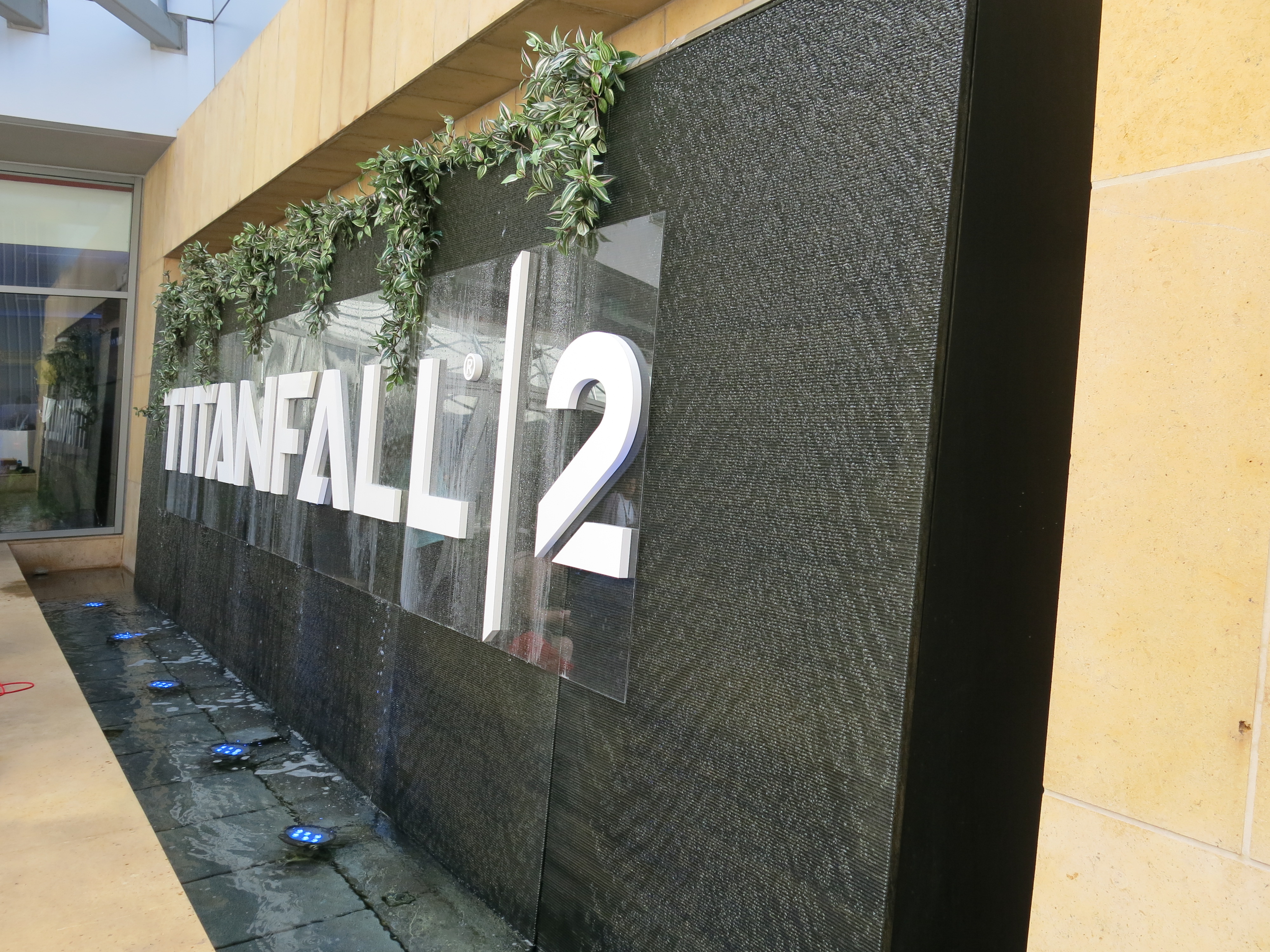 This fountain was really, really, cool

Time to change the narrator!

Now your hearing from Fionna Fox, who also went to the live play event! EA play first of all was pretty amazing I really enjoyed the whole exclusive feel of the event, even if the lines were really short and the place felt a bit empty on the last day at like 2pm.

Titan Fall 2 itself really gave me the same feel as the first, but bit more refined. I really feel like the gameplay was a bit more refined feel than Titan Fall 2, since so many games now use a similar movement system for their game, I really felt at home with wall running, jumping, and grappling. This year it seems will be the year of the grappling hook, as both Titan Fall 2 and Modern Warfare have demonstrated grappling hook style movement. Movement still feels fast and fluid, with a lot of emphasis on verticality. You can easily get on top of what ever building you need to get to snipe, or shoot down.

I started off with a class with some kind of rifle that didn’t have ammo (extremely odd and didn’t feel very good) I quickly changed out for the other available class which was a sniper rifle that was not scoped.  This rifle was pretty dam cool, but hoenstly im not sniper and so I felt a bit like I was out of my element.

The game mode we were allowed to try is a new one where points appear on a map and you must go to that point and kill NPC’s on the point. Not just NPC grunts like the first Titan Fall game though. Grunts now get titans, stupid titans, but titans non-the-less. These NPC titans show up at those points and you have to kill them. Killing or dooming an enemy titan will get you a bunch of the points you get for killing NPC’s on the map. This game mode felt slower than Titan Fall one, something I honestly think isnt bad at all.

Overall I am interested in at least giving the game a whirl when it comes out in October. I think its going to tough market in October for shooters, with both Cod, and Battlefield on their way so shortly after, I hope they dont swallow up Titan Fall 2, which I feel like could be solid entry in to the franchise.

Titanfall 2 will be available on Xbox One, PS4 and Windows PC on October 28th