Yet another day means yet another round of supposed leaks for the Nintendo NX. As with anything related to the unannounced console, take these with a grain of salt because we all remember how that supposed controller leak went down last month.

This last news comes by the way of multiple NeoGaf threads and a locked Twitter account belonging to a known industry insider.

The Legend of Zelda For Wii U has long been rumored to be coming to both the Nintendo NX and Wii-U and this latest lengthy post by 10K adds another anonymous confirmation to that list. Other Wii-U titles supposedly in development for the NX? Ports of Mario Maker and Splatoon are both in active development according to 10K’s multiple sources. While these games may certainly be in development there is some contention about whether or not they may come to market due to the challenge of engineering cross platform play for Splatoon and backwards compatibility with existing levels for Mario Maker. Apparently it is also “100% confirmed” that Smash 4 (otherwise known as Smashbros for Nintendo 3DS / Wii U) will be making its way to the NX as an enhanced port, no rumblings if this game may also support cross platform play or use the 3DS as a controller.

Apparently development kits have not been sent to eligible developers yet. Although, the Software Development Kit (or SDK) is apparently in the hands of developers as of the publication of the lengthy post. In relation to ports of current generation titles (Xbox One / PS4) –  these anonymous sources have had no problem porting current generation code to Nintendo’s SDK with ease and reportedly the NX’s clockspeed will be somewhere around 15-30% faster than the one found in the PlayStation 4.

Some of these rumors have been backed up by Emily Rogers. Unfortunately the account is locked so we can not verify the authenticity of these tweets but here is a screenshot as it appeared in the original GAF thread: 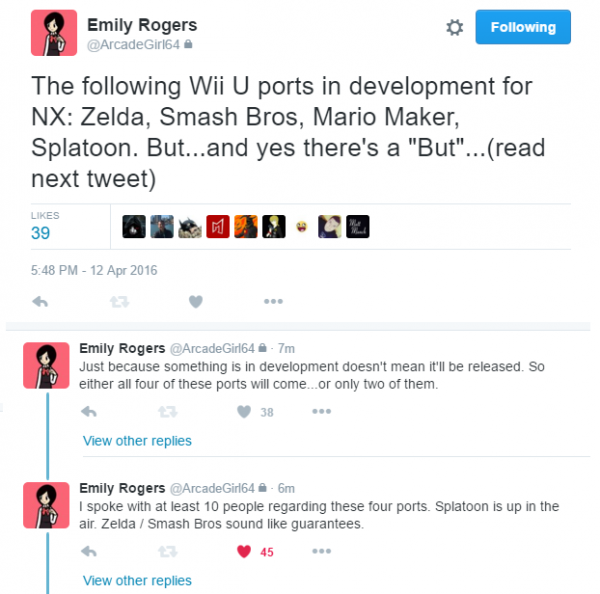 What do you think these of these? Fake? Real? E3 Is only two months away, I suppose we will find out then.