Home / Esports is HUGE, over 21% of Twitch total viewerships HUGE

Esports is HUGE, over 21% of Twitch total viewerships HUGE

It should come as no suprise that E-sports is not some passing trend. If million dollar events and rented out sports arenas for spectators arent enough to tell you that, Twitch just released their 2015 look back and it contains some not so surprising facts about the world of esports. Newzoo has kindly taken that data from that report and summarized it here  and ill give you the jist of it now.  ” “Twitch was the true accelerator of the growth of esports in the West, esports has helped Twitch grow to the massive live video platform it is today. more than 21 percent of “all hours watched” on Twitch from July to December 2015 was dedicated to esports”  Holy swear word batman thats a lot of hours of League, DOTA2, Heroes of the Storm, and the half dozen other smaller mobas (sorry Smite you dont get in with the big dogs). 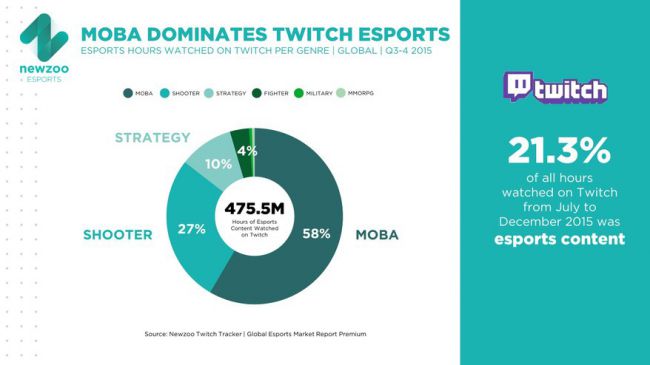 Mobas even accounted for the majority  of Twitch esports viewership, with 58 percent of the total hours watched during the second half of the year, most of it dedicated to League of Legends and Dota 2. Shooter were a distant second with only 27% and finally strategy and others making up just 14% of total viewership. Most of the 10% of strategy category was Hearthstone, which properly should have its own section since its a card game, but Twitch has chosen to lump it in (likley to keep MOBA from eclipsing the 70% mark).

Newzoo also found that “esports engagement” varied rather dramatically around the industry. “47 percent of StarCraft 2 hours viewed were esports centered compared to just 13 percent of the hours spent on Hearthstone, which has a relatively larger group of non-esports viewers.” The report said.  The study also found that, while major events drove high levels of traffic, they also pulled eyes away from user-generated content: During the first three Saturdays of the NALCS, user-made content viewership was down 44 percent compared to the preceding three Saturdays. Not really a suprise there as Twitch tends to feature those sponsored sports event streams on their front page. 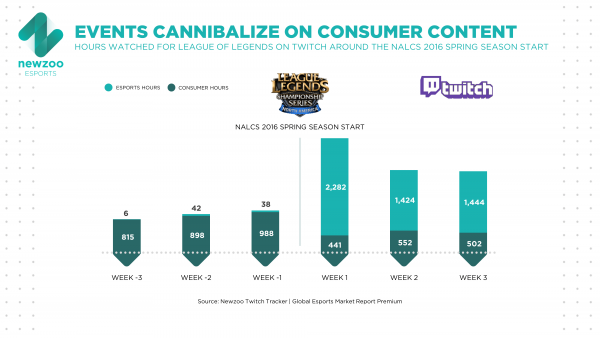 This graphic is a good visual representation of what the report says, you can see that during the LCS event there number of esports hours was far higher as a percent of consumer hours spent on Twitch. 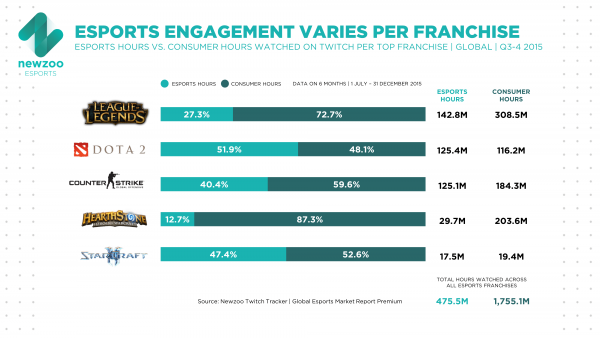 Newzoo closes by saying: “The importance of esports for Twitch is reflected in its continued partnerships with publishers who are growing their franchises as esports titles, the latest of these partnerships include Psyonix’s Rocket League and Super Evil MegaCorp’s mobile MOBA Vainglory. The latter also received a multi-million dollar investment from Twitch itself.” Twitch is seems is fully commited to their current strategy for Esports, and I like many other wait with baited breath to see what they will do next.