Overfall is a new game from Pera games. Funded by Kickstarter and currently in early access, the game released March 1st. The game features a mix of turn based strategy, roguelike elements, and adventure, packaged in to a 2.5 format with a lot of emphasis on exploration. Each time you play the world is randomly generated, so you get a lot of variety and re-playability.

You play as two adventurers who have returned from another plane on a quest for the disk of ages  for the Everking. You return home to find that in your absence three centuries have passed, and the Everking has gone missing. You are left with nowhere to go, and in your possession is the sought after disk of ages. With the beings that made the disk in hot pursuit of you and your comrade, it’s a race to save the world. Story thus dispenced with the player gets their first look in to the world of Overfall. What you see might surprise you the world of Overfall is a sea of islands, full of boats controlled by A.I. 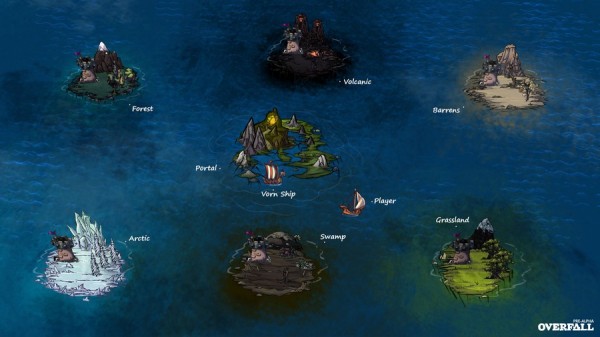 The lovely over world map

That sea of islands exists in a rich dynamic world. Navigating the world gives the player the feeling that they are merely are merely a cog in the machine of this ever changing world. Moving causes the other boats around you to move, so everything in time as you move. This gives the game strategic depth allowing you to predict the moves of the other units on the field and counter them. While you explore the world, or build your allegiance with a nation your enemies are performing their own tasks as well.

Exploration is a big part of the game. Every island you explore will have a different event or area to interact with. With no two playthroughs being the same some encounters may have different dialogue options as well. Building an alliance with a nation will earn you respect with them, but may earn you contempt with others and make them hostile towards you. Gaining a strong enough allegiance will assist you in aiding them in taking over their rivals beacon to summon the Dys.  While you are occupied with the business of alliances and fights on the surface world, the mysterious invaders are building a dock and force to take over this new found land.

Drilling down past the overworld movement mechanics, we come to the games combat. With the games turn based combat every action is key, with three actions each turn, movement, utility, and attack, making your moves should have great forethought. In addition to the stanfard movement that characters can do there is also a special action called a pseudo move. These are usually attack moves, for example, for the warrior it is a jump that damages enemies within your landing area, the cleric is able to pull allies to her and heal them. All of the psudo moves are great for getting in to and out of combat quickly. The next move type is utility move. Your utility move allows you to buff yourself, or debuff your enemies giving you the chance to stop an approaching enemy or heal and debuff your characters. Finally we reach the attack phase. Attacking is also different for each class, some characters just have attacks which will have a varying degree of uses, while others can heal and attack at the same time. The wide variety of attacks and abilities ensure most players will never get bored with the game. 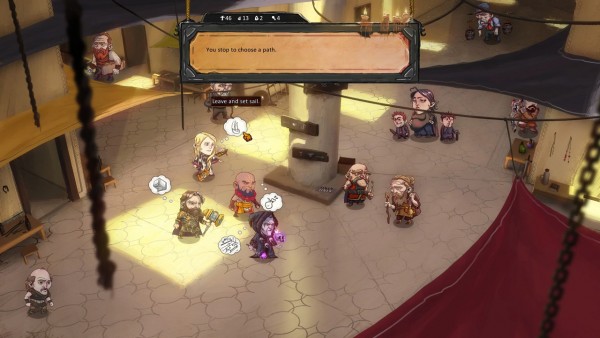 Combat takes place in unique back drops, and is never the same twice

Much has been said in other reviews about the dialog in this game, I will tell you this, it is quite deep. There is a choice system which has a direct impact on gameplay. Two sides appear in dialog choices, a white standard option, and a yellow option that provides a more sure resolution. Each of the games characters has different dialog options so if you approach the same NPC with two different characters in your party and you will get two different sets of dialog. This keeps the game fun and engaging, with a lot of replay value even beyond the fact that everything is randomly generated.

The art is well done and the sprites are masterfully put together. The vibrant color scheme and varying colors for each nation gives a strong uniqueness to every character. The overworld is easily discernable as the ocean background makes the colorful islands pop allowing you to see where you are heading. The sprites and effects are minimalistic, but they do convey the actions yourself and others are taking. The soundtrack is fitting for an adventure game, nothing too fast paced or overbearing for the feel of the game.

For several reasons I recommend picking this game up, with steam workshop support already in place you can cater your game to how you feel, and with the story builder implemented into the game itself you can create and share adventures as well. Overfall is definitely a game you should have on your radar for early access, from it’s overworld to the combat this game has a ton to offer and high replayability. Its real time events, race against the clock, navigation, and alliances offers multiple playthroughs and a different experience every time. The combat has depth and a steep learning curve, decisions should be tactical and thought out, rushing head first will only result in you being surrounded. The art style is beautiful, with great sprite animation and overall color scheme it brings its own perspective to early access games. I recommend this game as a buy it now.