A few blocks away from the ongoing Game Developers Conference, Oculus hosted an exclusive preview event for their launch titles and other games coming to the Oculus Rift shortly after launch. One of the games being shown was Dead & Buried, a gunslinger game that makes use of the Oculus’ Touch controllers.

Dead & Buried is being developed internally by Oculus Studios and the noticeable intent of the game is to highlight the Touch controllers. While Oculus has previously showcased their single player mode of the game, at the event they set up four stations with Dead & Buried and placed four players together at a time in a 2v2 shootout. Of the dozens of games at the event, it was clearly the most popular to both play and watch, gathering a bemused crowd of developers and media. 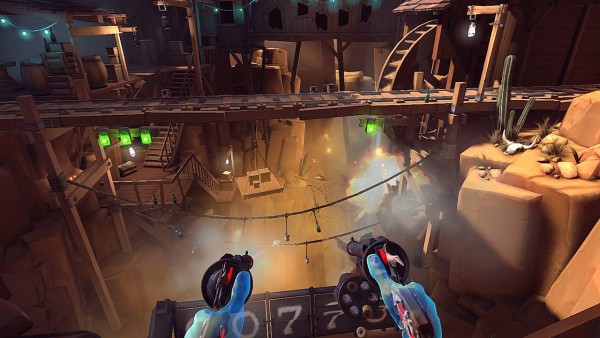 By tracking your head and the touch controllers, the game allows you to duck and hide behind cover while you fight against other players. This encourages players to crawl around, try to reach their guns around corners to protect their body while firing at others. This gameplay inspires a lot of enthusiastic stretching, ducking and crawling. Absorbed in the game, the players are quite amusing to watch, crawling on the ground, calling out and contorting themselves.

With the hand and head tracking, it’s easy to forget that the Oculus can’t track your legs and body as well. Luckily, while the other players can see your character’s body, you can’t see it yourself, removing any dysphoria caused by seeing your body contort to where yours is not.

There are renderings of your hands in the game, which are tracked by the Touch controllers. Though the hand locations are accurate, the hand is open when you are loosely holding the controller without pressing any buttons and grasps when you hold the inner triggers. I found myself comfortable with this oddly quickly before the game started and my partner and I highfived and gestured at each other before the match started. Voice chat was also integrated into the game and I could clearly hear my partner and also hear the discussions of the other team. 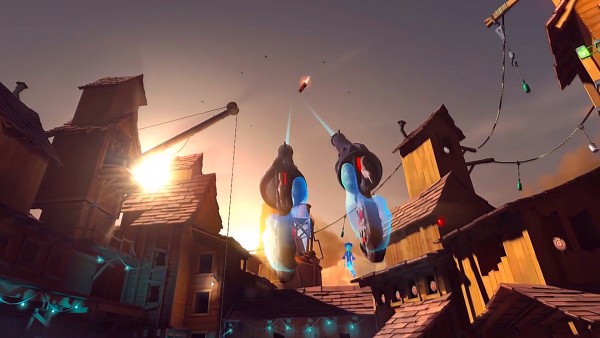 The goal of the mode of the game we were playing was to get the most amount of kills on the enemy team. When you die, you respawn at a new location with new cover options.

Admittedly, I played very defensively, only one death in the 48 in the match was mine. I found the aiming to be difficult, though, and it seemed like the accuracy of the guns varied. While I didn’t die often, I also didn’t get many kills. I only hope that my cover fire was of use to my teammate!

You are provided with two sixshooters as your base weapons, but additional weapons spawn and can be picked up and used in the game. Additionally, dynamite can spawn and be grasped and thrown at the other players, killing those hiding too well behind their cover to be shot. 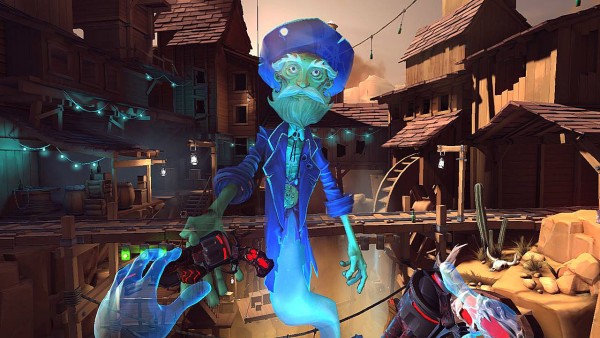 One clear issue of the game when both playing and observing was the spawn locations and areas of coverage. It was very apparent that not all spawn spots were created equally and the cover for each of them varied greatly. Sometimes it was very easy to hit an enemy player and sometimes they were so well covered that it was only possible to pray you could graze their head or leg with a shot.

I noticed that the enemy team often was very exposed when they respawned, making some of the deaths very sudden, catching them before they had time to hide.

Players also drifted far from the mats they were placed on to get behind cover. While I was told afterwards there was a way to reset the location so that players could recenter themselves, I watched almost everyone who played drift so far away that they were close to hitting walls and the TV at the front of the station. This was so common, in fact, that there were handlers making sure that the players didn’t injure themselves or damage the controllers by drifting too far from the area and smacking into things. One handler even took a jab to the stomach protecting the TV screen from a zealous player who was reaching out to grab a stick of dynamite. 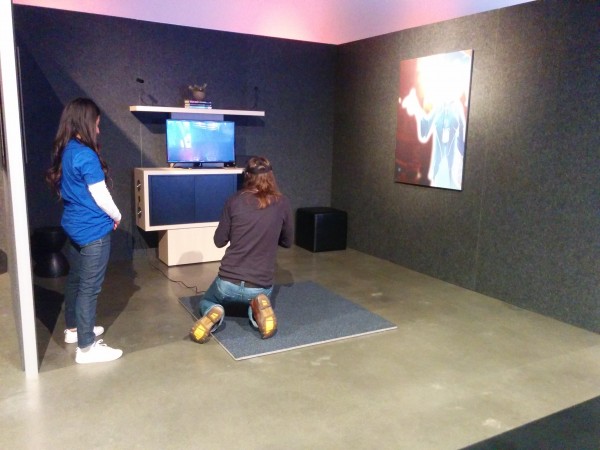 The controls felt fairly natural. To reload you had to quickly rotate your gun down and to the inside of your body, as if you were whipping open the cylinder. You shot by squeezing the trigger finger of the controller and you grabbed your base gun by holding you hand down to your side and grabbing with the inner bumper.

One issue I found with the controls, however, is that you had to hold the inner bumper down to keep your guns drawn. While this feels fairly realistic, it required me to keep a tighter grip on the controller than I would have needed to use normally. I found myself having to let go of my weapons to stretch my hands and, by the end of the demo, my hands were so exhausted that my fingers were shaking when I moved them. I can’t imagine playing more than a single match of Dead & Buried without taking a fairly significant break to rest my hands.

Overall, Dead & Buried does a good job of highlighting the uses and benefits of the Touch, while fully immersing players and encouraging them to make full use of their motions in VR. I appreciate that it compels players to crouch, duck and lean without direct instructions. However, while the game makes for a wonderful demo, the control have me concerned it would not be ideal for long play sessions and I fear that many a living room might suffer from over enthusiastic dodging.