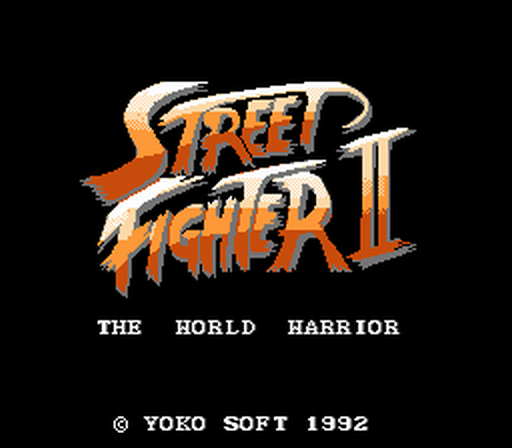 One of the more curious games I found out there back when I was really getting into NES and Famicom games a good decade back was a game that I thought never had an 8-bit release: Street Fighter II. Having played the hell out of back in the early to mid 90s at the arcade and on the SNES, I thought I’d give this game a try. I’m greeted with a still from the opening cinematic of two people brawling, with it scrolling up until the title screen pops up in all it’s 8-bit glory. Having never heard of Yoko Soft back then, I wondered if that was possibly an unknown official port, or some Chinese knockoff. Years later, I would find out out the game was developed by Hummer Team and was actually released in 1992. Having covered one of their other games in a past entry, they’ve shown that they made some quality bootleg ports for the Famicom. Since this was simplified for the for the Famicom, one of the major differences was the very limited character select of Zangief, Chun-Li, Ryu, and Guile. Fortunately, they mostly retain their movesets, even if it’s limited to two buttons for punching and kicking. Needless to say though, it’s difficult. Due to some iffy-collision detection, attacks can juggle an opponent for additional hits and sometimes they won’t properly connect once in a while. Adding to the difficulty, sadly, is being stuck with one continue and cheap AI will leave one quite frustrated while trying to clear a stage. Graphically, it’s something to be expected with non-animated simplified backgrounds and character sprites, but it looks pretty decent for something made back then. Unfortunately, there is some sprite flicker on character and projectile sprites. The music sounds somewhat familiar in this port, but isn’t something that produces anything near to the same atmosphere that the arcade game brought. Overall, the game is somewhat enjoyable to play and if one wants to brave the difficult AI to try to beat the game, it’s possible after learning how to quickly and cheaply defeat the fighters. This game would make for a good addition to any Famicom library, and something fun to own for any Street Fighter fan. 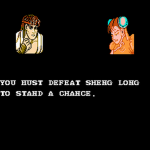 For a Famicom game, this looks good

With something difficult to play though, is a bootleg hack of a game that eventually changed things up for the Street Fighter franchise: Street Fighter II: Rainbow Edition. Any die-hard Street Fighter fan knows that Street Fighter II’: Champion Edition brought forth the ability to play the four Grand Masters, mirror matches, and numerous fighter tweaks for balancing. Some people though, may have happened upon an arcade cabinet where things were a little…different. One of the more immediately noticeable differences was the rainbow-coloured title screen, which is how this hack got it’s name from. The real fun begins during gameplay- ability to perform air attacks, change to other characters mid-round, several fighters being able to perform Hadoukens were some of the new things that this hack introduced for unsuspecting players. Graphics and music on the other hand, stayed the same in my experience playing it. In this game’s case, it isn’t a full-on bootleg of arcade hardware, but EEPROM chips are switched out with modified code. This was possible since the arcade hardware that ran Street Fighter II’, Capcom Play System 1 (CPS1),  had easily-removable socketed EEPROMs in them. Nine months from when Street Fighter II’: Champion Edition was released, Capcom released Street Fighter II’ Turbo: Hyper Fighting, which included things like faster gameplay and air attacks. Now whether or not Capcom released the update as a legal measure to go after companies that made and distributed the hacks or if it was primarily done to capitalize on some of the better features that people loved from the hack remains to be seen, but it is interesting how something like this influenced the Street Fighter franchise.

Apologies for not having an entry last week, so hopefully this two-game coverage makes up for it. Have a suggestion on what should be covered for future Broken Bootlegs entries? Let us know on Twitter and Facebook!