Last week I crawled out of the cave that is my home office and traveled to Las Vegas to attend the D.I.C.E. Summit, an elite game industry conference where the biggest and most influential players in the game industry meet to network, receive awards, and enjoy some time away from work for a few days.

A ticket at the door will set you back $3700, which is far outside of my modest indie developer budget. Thankfully, I was one of five lucky recipients of the Intel Indie D.I.C.E. Scholarship, which Intel and the Academy of Interactive Arts & Sciences Foundation, who hosts D.I.C.E., sponsored this year. While this was their first year of sending indie developers to the Summit, they have supported a scholarship for game development students for a number of years.

D.I.C.E. was amazing. I have attended countless industry conventions and meet-ups, but the density of powerful members of the industry had me completely floored. It seemed like everyone I met was a CEO, executive producers or lead developers from one AAA studio or another. Truthfully, for someone generally so bold and outgoing at similar events, I also felt an unexpected twinge of shyness; My accomplishments are few and minor in this realm of giants. 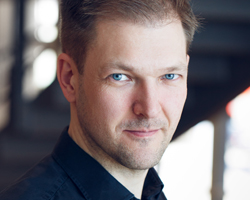 My first taste of the caliber of attendees of D.I.C.E. was when I met my scholarship assigned mentor for the conference, Hannes Seifert. His calm and kind demeanor when we talked helped me relax, but sitting next to the man who is the Studio Head and Executive Producer at IO Interactive still made me a little self conscious. Hannes had wonderful advice and I felt proud when he recommended I read a book that I had in my bag next to me (Creativity, Inc., a very good read for anyone trying to run a game studio!). We talked about production, management of studios at various sizes, and about game development in general. I came away from our conversation with helpful knowledge and a new sense of confidence.

My confidence wavered, however, when the summit started and I realized fairly quickly that I knew very few people there and that I stood out like a sore thumb. While there were some female students and tangential members of the industry at D.I.C.E., as far as I could tell I was quite literally the only full-time female game developer of my age. If that alone wasn’t enough to make me worry about being taken seriously, I don’t know if I could count on both hands the number of times I entered a conversation and was asked what school I was attending.

Thankfully, there were a number of women in the industry there, many of which I had the pleasure of talking to and connecting with. Still, the overwhelming majority of attendees were, as to be expected, middle-aged, white men, and, regardless of gender, everyone there seemed to have well over a decade of experience in the industry, if not much more: Todd Howard, Randy Pitchford, even Hideo Kojima were all there.

During one of the scheduled roundtable talks, I sat next to David Helgason, co-founder and previous CEO of Unity. He wore a patterned button-up shirt with the collar popped in a playful manner and was full of smiles and chuckles. We discussed trends in the industry and inquired about the direction of Unity and other game engines. When I first sat at the table, I feared I wouldn’t have much to contribute, but I found myself talking and theorizing as much as anyone else at the table. As much as I was hoping for other people to give me a chance to prove myself, I realized I was doubting myself as well.

When I started into a conversation without doubt, I found it to be much more comfortable. The other roundtable I attended was on small studio funding and hosted by Asher Vollmer, the creator of Threes and a friend of mine, and a representative of FunPlus, the company helping fund his next project. Apparently, I talked so enthusiastically and knowledgeably about crowd funding that it was initially thought I had already launched my campaign! Certainly, hearing that later was a boost to my ego. 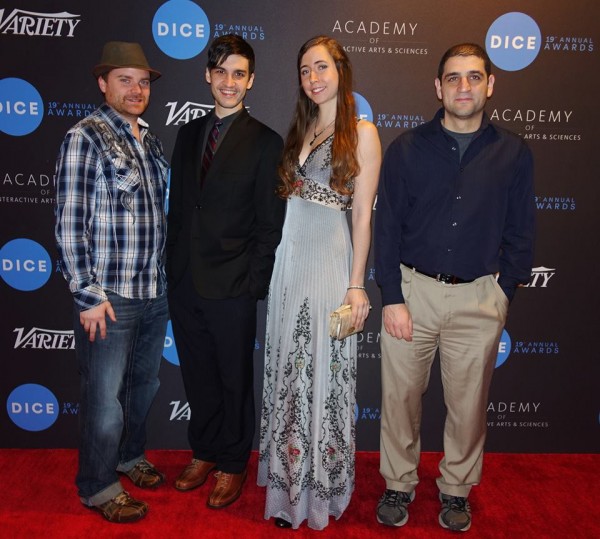 Tim, Ty, myself and Issam, all Intel Indie DICE scholars.

Asher, Ty Taylor, Tim Keenan, Rami Ismail and few other indies that were able to attend D.I.C.E. were my saviors when I started feeling overwhelmed by the crowd of older, more accomplished members of the industry. While my indie friends have all accomplished much more than me, being able to sneak over to them for some fun, lighthearted conversation and even a hug or two really helped pump me back up when I was feeling out of place and facing self-doubts. Without their support, I’m sure I would have been quite an anxious mess by the end of the summit!

Of course, part of the fun of the summit was the networking specific events. The opening night party at the Skyfall Lounge was a ton of fun and the view was absolutely breathtaking. Though I fear the only picture I took was of the toilet, but can you blame me? 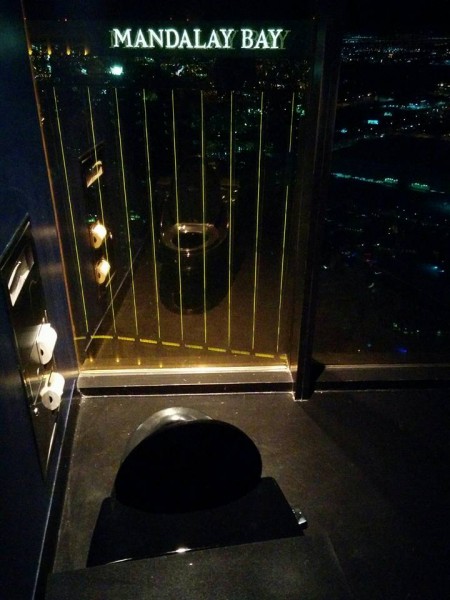 Seriously, look at this throne view!

Attending the D.I.C.E. Awards was also quite fun, especially with the red carpet set-up! The multi-course dinner during the awards combined with the beautiful stage and impressive games made it a night to remember. Though part of the magic was ruined when it was pointed out to me that the hosts were reading a script off of a projector! I guess now I know how it is done at the Grammy’s! 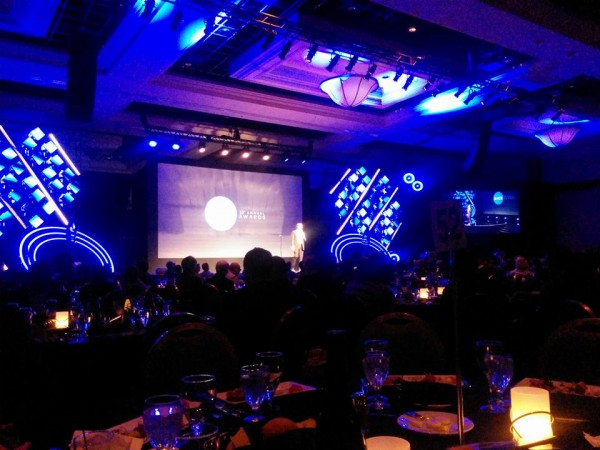 While I may have struggled here and there during D.I.C.E., I still came away with amazing connections and powerful advice. I am so grateful that I was able to attend and I hope that I will be able to come back again. It was by far the most valuable conference I have ever attended!