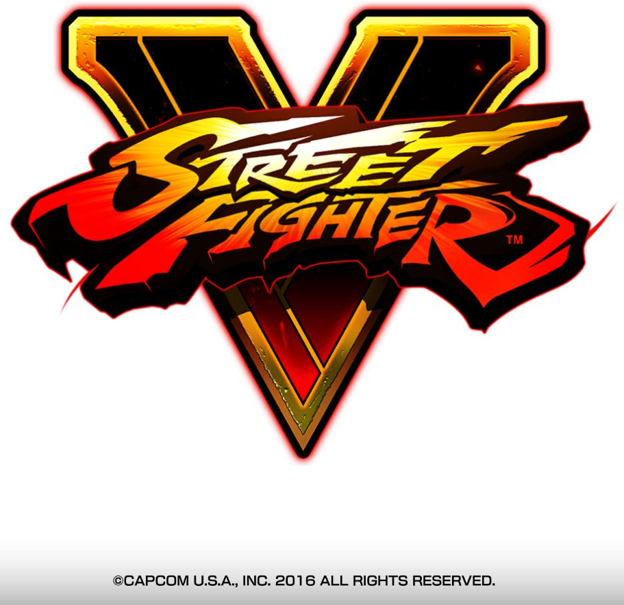 Almost exactly 7 years since Street Fighter IV came out for PS3, Xbox and Windows, Street Fighter V has released. With support for only two platforms at launch, PS4 and Windows, this is a more limited release. SteamOS support is coming “this spring” apparently. Sorry Xbox gamers, I don’t see anything planned yet for you. Unlike the version heck of the last release with Super, Ultra and Arcade Editions, this is going to be a unified online platform with players on any system able to match anyone. Considering the time between releases, and with that feature alone, this is an exciting event for fighting games. Street Fighter is the longest running fighter out there as far as I can figure, and created many of the ubiquitous tropes of the genre’s gameplay, including accidentally inventing combos in Street Fighter 2. In other words, if you’re into fighters at all, this game is big news. I played the game on Steam, where everything is already active and running. This release is well put together, as expected from Capcom.

Also as expected for 2016, the game has two new shiny ways to buy DLC. There is both in-game fight money and purchased “zenny”. As it stands the full game is sixty dollars to start, so I really hope the in game currency counts for something. Something as in I won’t be agonizing over whether to buy a five dollar DLC to put glasses on my characters *cough* Persona 4 Arena *cough*. Somehow I don’t expect, as there is already a ‘2016 season pass’ on Steam, that the six planned additional characters are going to be obtainable with fight money.

I’ve been around long enough that this tactic still disappoints me, but the approach has its ups and downs. Adding characters in after release in a drip lets Capcom fill gaps in the lineups that players want. And while the ‘every game has a soundtrack available’ rule seems like a cash grab, there are plenty of games that I would have killed to get a soundtrack of when I was a kid. There are four brand new characters to the series this time around, and from the start. The release comes with 16 total in its core setup, so this is a decent chunk of what’s available. These are: Rashid, a young and wealthy middle eastern man with an addiction to his mobile phone, Laura, a Jiu-Jitsu master looking to make it famous, FANG, and evil master of ranged poison attacks, and Necalli, and ancient Aztec warrior come to life with the sole purpose of totally not riffing on the recent JoJo’s Bizarre Adventure resurgence.

This is a modern game with those modern add-ons, features, and a modern game engine. The game is written in the Unreal 4 engine; it’s graphics are absolutely a step from Street fighter IV. Movement is fluid, characters clothes flow, their faces are emotive and it’s a total blast. The levels and characters are bright and move with pizzazz. The backgrounds have a ton going on in every scene, at this point it sometimes gets as busy as King of Fighters was renowned for. There is unfortunately some 3D model clipping, such as Cammy’s hair in the photo below, but the game moves so fast none of it is on screen for long. Furthermore, the game’s soundtrack is fantastically well done. With the physicality of everything going on its essential that nothing feels stiff, and the games voice work, sound effects and music are perfectly in tune with that need. There’s a great heart pounding feel to everything going on graphically and in the music here. 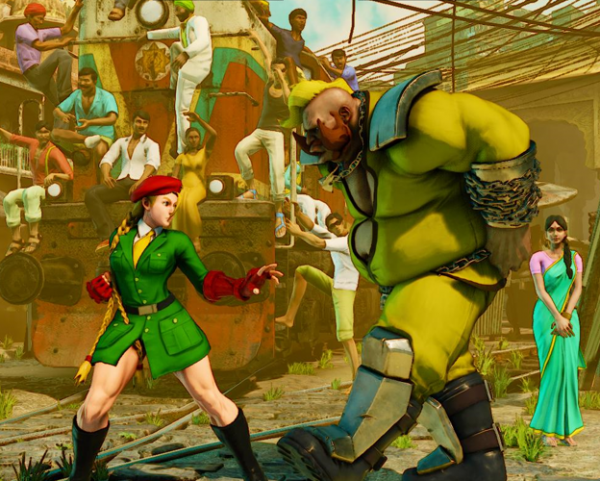 People everywhere, and all of them active and animated. Almost a shame you can’t watch the background while fighting.

The game feels faster paced than Street Fighter IV, not exactly Marvel vs Capcom or even anime fighter speeds, but still appreciably fast. Throws, blocking, movement and combos all work exactly as expected. For me, the Xbox 360 controller used on my Windows 7 PC worked out of the box. I couldn’t figure out for the life of me how to swap control over to my Hori fighting commander though, which has worked fine on other PC titles. I no longer have a big box fight stick so I can’t comment on that, but it should work splendidly on one as it uses the expected six-button, single stick controls and long standing combo patterns. As long as you can figure out how to get the game to recognize it, might help to be Xbox compatible which my Hori isn’t. Play wise this absolutely feels like Street Fighter should in the controls department, it’s slick, responsive and quarter-circle fireballs abound. There are some new added mechanics as well. I love playing fighters casually but have never been one to spend days making the ‘ultimate combo’ or memorizing the frame-duration of every move’s cooldown. Because of that, there isn’t much I feel like I can say here from the short time I’ve played. If you’re a hardcore fighting game lover you probably already know more than me. If you’re not, you’ll get the most benefit out of playing directly. It’s easy in fighters to simply feel it if characters aren’t moving the way you expect, but here the gameplay felt spot on.

When it comes to learning, there is a brief story mode for all characters in addition to the minimal tutorial introducing basic concepts that you go through up front. The short bits of writing aren’t inspiring, but do manage to give each character a unique voice. It’s through these you’ll get your introduction to the new features of Street Fighter V such as V-Skills, an add on to the existing EX system. This is a first for the series, which has not traditionally had multiple meter modes. I found it to be fun and not overly complicated to use or follow. I think in casual games it will help newer players avoid getting defeated in a clean sweep. The meter is big and bold, and character models generally give solid visual indicators that their player is in their V-Trigger mode. The other new visible meter is the stun bar. As you whack the crap out of your enemies, and they don’t recover, they can end up stunned an unable to fight back. This feature has actually been around a long time for Street Fighter, but never before so easy to track. The story mode acts as a fairly easy introduction to each of the characters. Their background, ambitions, challenges and place on the stage of good versus evil. This is nothing compared to the difficulty of a regular match, but is a fun way to pass time and learn a bit of the character’s moves. This also helps ‘level up’ your characters, which seems to unlock a bit of extra options for customization, but I’m not sure that it does anything else other than steam trophies. Don’t worry, Capcom checked off that Steam feature box and there are plenty of ‘trophies’ for completing many fairly mundane tasks in the game. Training mode is really where most folks will be hashing out their combos. Unfortunately, there doesn’t seem to be much in the way of setting how the AI blocks or if they should move at all during training mode. It’s sparse but functional and still as always the best way to pin down your moves. With a solid character roster at start and more coming over the next year, you’ll be spending plenty of time in there. 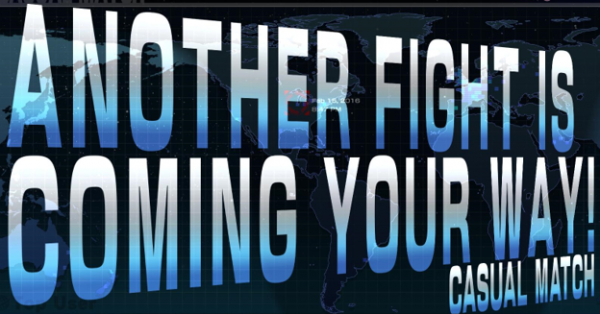 Getting your butt kicked, the fun and easy way

As for online play, I was immediately asked to set it up after tutorial, and it’s a huge part of the game. I found it very easy to get set up with a match online, games come in both casual and ranked flavors and the system will try to match you up with someone of similar skill. This took a little while to find me an appropriate opponent and during an online match I did experience some frustrating latency while getting my butt kicked. Street Fighter is not normally my choice of fighter and I played a new character so I wasn’t prepared with any solid combos. The fight was fun and matches on skill though I wasn’t swept completely, so no complaints with the matching. Hopefully the latency and relatively long fight wait will go away after the beta.

“Censorship”, the scare quotes should tell you most of how I feel. The characters are still raunchy and inappropriately dressed for any physical activity, and that goes for a lot of the male characters too really. The censorship isn’t much different from Genesis having more Mortal Kombat gore than the Super Nintendo. While I have watched the videos and see that yes, there are some changes to camera angles and such, but the character models themselves haven’t been changed. Cammy for example in story mode wears a trench coat, combat boots and lacy black panties, nothing else. Laura in story mode starts with an under-boob revealing mid riff that is a marvel in opposition to physics, as nothing pops up when she’s upside down. That said, this is nothing new for Street Fighter. 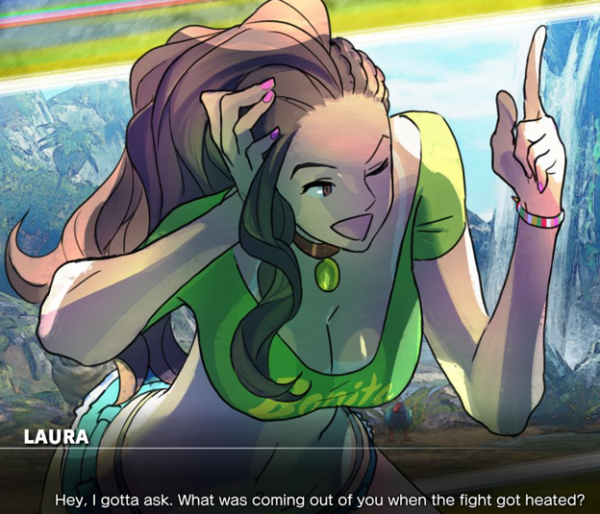 If this isn’t some kind of double entendre, I don’t know what is.

For example, Cammy is still great to play and will beat the shit out of any of the male characters if you’re good enough, between that and the short plots of the story mode, Capcom shows that these are women with agency. As a woman, the question of whether the female characters are shown to have legitimate agency is a big deal to me, and fighters often do strangely well in that regard. The level designs are full of almost propaganda-poster level racist tropes in their respective countries and yet that seems to get little to no comment. I guess partly it’s because it’s Street Fighter, and this is what they’ve done since day one. Also, it’s that way in part because there really is no exposition to these settings and this is how Capcom has always added a sense of place to the levels. I think to enjoy these games, like Skull Girls or any other fighters, you have to accept that there’s going to be a certain level of trashy fan service and roll with it. Also, to be honest, if everyone dressed like MMA fighters it would be accurate but extremely dull.

Personally the stage bear, Cossack Dancers, Russian night club and Matryoshka dolls being crammed into one stage (among more tropes!) bothers me more in this fight than Laura’s outfit.

Overall, I’m happy with this iteration. It’s very easy to get into online matches, auto-match is an appreciated feature. The latency I encountered was a bummer, my cable internet is generally no slouch, but it may have been a too-distance matchup with not enough people online in the beta. I believe Street Fighter will be approachable to new players with V-Skills and the stun meter. The visuals, settings and music are all well executed and make your heart pound while playing. With no arcade consoles out yet and a single online pool, this Street Fighter is fully made for widespread modern Internet and online friends over couch fights. This is a fantastic upgrade to the series.