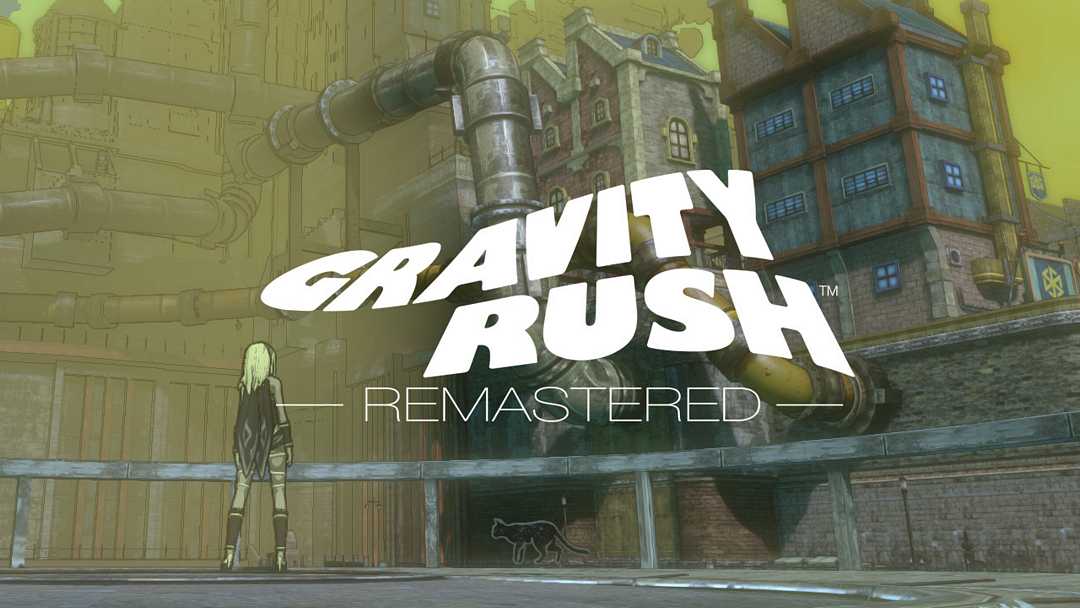 Flying onto the Playstation 4, Gravity Rush Remastered brings a fresh look to the gravity defying 2012 PS Vita game. The game starts off with an opening cinematic of a tree of which after the player taps the apple a number of times, it falls down into an open space eventually falling and rolling down, starting the opening credits followed by tutorial episode. After gaining control of the female protagonist she realizes that has no memories and finds herself next to a mysterious cat. After exploring her way about, a man drops down grabbing her for help save his son from the storm, saying that she has powers and that she can help him. In trying to save him, the game shows how shift gravity in order to rescue him. From there, the mysterious girl runs away as the father and son blame her for their house being destroyed. Shortly after, the girl finds a crow similar to her cat and decides to chase after it. The tutorial finishes up with the mysterious girl saving an officer, and smoothly progresses into how the game’s combat mechanics works by fighting the game’s enemies known as Nevi.

While learning how to fight, the player is introduced to being able to perform a basic kick attack, evade enemy attacks, and perfor air kicks while floating and flying around. Known as Gravity Kick, it will come handy while trying to defeat some of the airborne Nevi. As the story progresses,  the player is introduced to purple gems, which can be collected to upgrade your character’s abilities. The upgrade system works similar to some RPG mechanics of collecting a certain number of gems to level up any number of things about the character, including such things as affecting Gravity Gauge drain/recovery, strength of attacks, or special abilities. Gravity Rush Remastered does a very good job of handling the way it shows the player on how game mechanics work without being either slapped on or just plainly in the way of gameplay.

The story presentation is different from what I’ve experienced with other action/adventure games and instead of  in-game dialogue cut-scenes, the game is presented with manga-style storyboards to progress the game. In addition to that, the cell-shading that was used for the game gives off a very strong anime-feel to the game. Reinforcing that feel is the musical score, which can be quite atmospheric while wandering around, or can aid in the urgency in a situation such as an enemy battle.

The controls take a little bit of getting used to, but they’re easy to use once the player gets the hang of things. One large thing I noticed while playing is that the game is very forgiving with mistakes. Falling off of the map into the void or perishing from an enemies will spawn you at the nearest safe spot without any penalty. After coming across the same officer that I saved earlier, he gives her the name Kat since there’s a cat tagging along with her. Looking back on the story thus far, the protagonist, Kat, is someone without memory trying to figure out what the heck is going on and who she is. It’s really sad to see that someone has to deal with that while dealing with Nevi and others that cause trouble throughout the game. Gravity isn’t hard, nor too easy to play, but it’s quite easy to pick up and get into while also good enough to play in bursts. With that said, it isn’t easy to put down, as it draws the player in to keep playing to see what happens next.

While easy to get into for new players, it’s just as easy (if not easier) for people that have played this on the Vita, as BluePoint Games did an excellent job porting over Project Siren’s work over to the PlayStation 4. The controls are mostly the same, including being able to use the PS4’s gyroscope movement to control Kat while in the air, making it a very smooth transition for previous players. In addition to that, the game’s visual quality got an overhaul and upgrade so it not plays at 60 frames per second (compared to the Vita’s 30fps), but looks better overall in hi-definition. One other feature that players may enjoy is the fact that all of the downloadable content that was available for the Vita version is included in the core game, giving additional story missions and costumes to collect. Even if you’re not a veteran player, Gravity Rush Remastered is really fun to get into and play for hours on end. For those that don’t own a PS4 but have a Vita, the original Gravity Rush is still a very fun game to buy and play in it’s own right. For people that do own a PS4, this game makes for a nice addition to the library for any one that enjoys playing action/adventure games. With how I loved playing through Gravity Rush Remastered, I can’t wait for the sequel to come out later this year.

Gravity Rush Remastered is now out on the PlayStation 4.