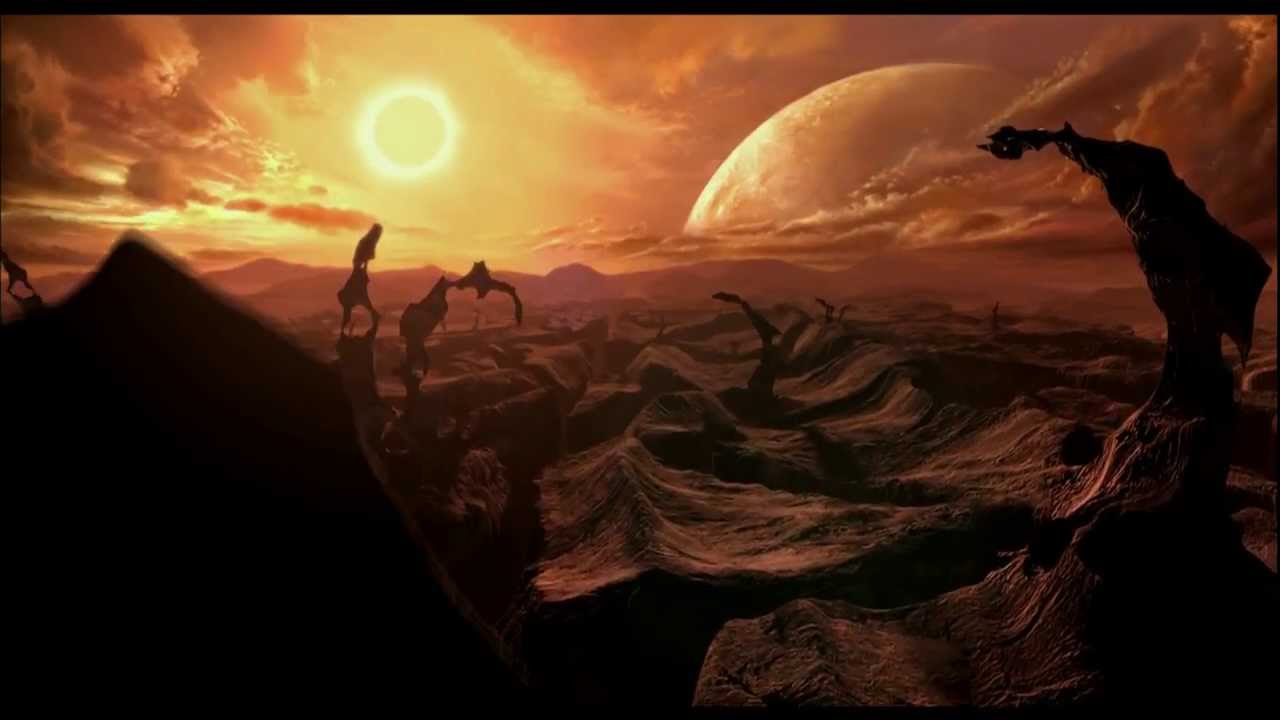 It’s a pretty well known stereotype in the North American movie world – perhaps globally – that movies based on the stories told in video games generally aren’t that great. Of course, that’s a somewhat mixed opinion with the people who actually make them because, in spite of this, a great number of those movies turn a pretty nice profit, some of them even hitting blockbuster status. Among those that were panned critically, though, is a diamond in the rough that was often seen as a great standalone movie that suffered against a franchise name that was well-known for being incredibly high quality and was riding a huge wave of success and expectation at the time. The pressure of expectation was a big one and for a brand new studio created by a company that hadn’t ever made a feature-length film in the past – we have to remember their contributions to the Animatrix series of shorts and the various CGI work they’d done for other movies before The Spirits Within – and with that hype train riding faster and faster towards release, the movie was almost doomed to be panned, from the time that train got on the tracks… follow the jump for more!

Doomed From the Start

Final Fantasy IX had been out for a little bit and expectations were high: Squaresoft had been riding the success of their last few games as Final Fantasy VII had become their first major North American mainstream success story and the two games that had come after were huge hits, as well. Thanks to their success, they were finally able to expand into other markets, allowing them to sell soundtracks and other merchandise to North American markets. Final Fantasy was quickly turning into the franchise to beat and people were largely growing attached to the tropes and themes that went from game to game. As far as I was concerned, it was easy to understand: the games, when translated properly, touched on subjects rarely approached in gaming, at the time, and it practically built the standard almost all traditional Japanese RPGs were to follow. Final Fantasy wasn’t simply a gaming franchise but it was becoming a legacy and Squaresoft was continually attempting to turn it into a pop culture staple.

They were really very close to doing just that when The Spirits Within was releasing: while the studio made it pretty clear from the outset that we were going to see a brand new entry to the franchise that had no real connection to any of the games before – something fans of the franchise had grown used to as this was before Square started pumping out sequels to franchise entries and spin-off entries – there were a lot of fans, especially those new to the franchise, that were expecting there to be a lot of in-jokes, chocobos, moogles, throwbacks, and the like. There was a lot of expectation for the all-star vocal talent, too: while they weren’t well-known for their voice-over acting, they were still stars and brilliant actresses and actors in their own rights. No matter how it turned out, it was very clear that this movie was going to be big.

That’s what makes it even more of a shame that the movie flopped when it came out. It cost the studio 137 million dollars and it only made back just over 85. Word spread quick that this movie just wasn’t “Final Fantasy enough” and that’s a defense used by many of the film’s detractors to this day. While the movie, on its own merits, got praise from critics like Roger Ebert, the harshest criticisms were always that the plot seemed stereotypical and the characters shallow and underdeveloped. 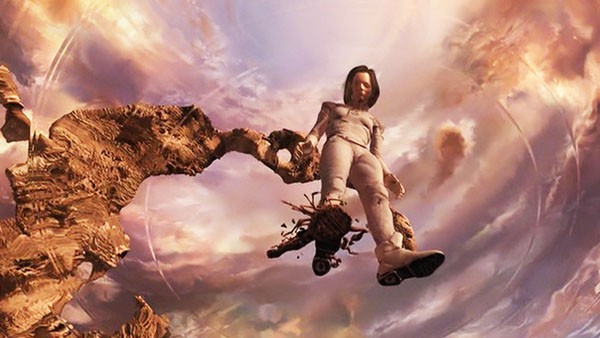 In case you haven’t seen the movie, the plot breaks down like this, in a nutshell: the movie takes place on Earth, some thirty years after a meteorite crashes on the planet, releasing what the world thought to be alien invaders, a type of translucent being that can only be destroyed with a certain type of “spirit energy” that was later used as a power source. In the initial panic, much of the world was devastated and the world eventually develops and cowers behind “barrier cities” that act as the last bastion for humanity, protecting them from these aliens they call Phantoms. The main character, Aki Ross, begins a journey to eradicate the world of the Phantom threat by building the perfect “spirit wave” by collecting seven spirits hidden across the globe. Of course, the talk of spirits and energy is not received well by the public and the main antagonist seeks to destroy the Phantom threat at their source using brute force which, at the end, ends up only magnifying the threat and Aki finally completing the wave at the last moment is the only thing that ends up saving the world.

I’m extremely oversimplifying things but that pretty much sums up the plot, which, by most video game standards, already sounds like a Final Fantasy meets Mass Effect kind of storyline that could really become something. There’s a lot of great things at play, here: the vocal talent puts up a great performance, the visual effects are amazing for the time and they still wow today when shown in 1080p, the soundtrack is awesome, the orchestral score is wonderful, and a lot of the themes found in the plot are thought-provoking and pretty deep. I mean, between all that, had this been made into a large-budget video game, you probably would have seen things go really well for it, sales-wise. Unfortunately, you try and pack all of that into a movie that only runs just over an hour and a half and you find a movie that runs into a problem a great deal of book-to-movie adaptations run into: shallow character development, rushed plot, contrived changes to the plot to make it palatable to the common movie-goer… you name it, they’re there. You also throw in that the movie’s plot seemed extremely personal to Hironobu Sakaguchi, the movie’s director and the franchise’s creator, and you have even people trying to favor the movie left kind of confused.  Call this a pet peeve but I also found the motion capture quite robotic and inhuman but the technology was way different back then, there’s been many advances since then.

I find that in spite of its flaws, there’s a lot of strengths in the visual, audio, and thematic approaches to this film and if it weren’t considered a box-office bomb, there’s a lot here that a lot of people in film-making could stand to learn from. It’s a movie that insists upon the viewer, telling them that they need to invest in the movie, intellectually and emotionally, to understand, in order to appreciate it. That’s not something the casual movie-goer likes in North America, unfortunately, and that’s pretty obvious when compared to movies that were three million times worse that were based on video games like Resident Evil and Tomb Raider, movies that didn’t do nearly as well critically but raked in that dollar by the shovelful. 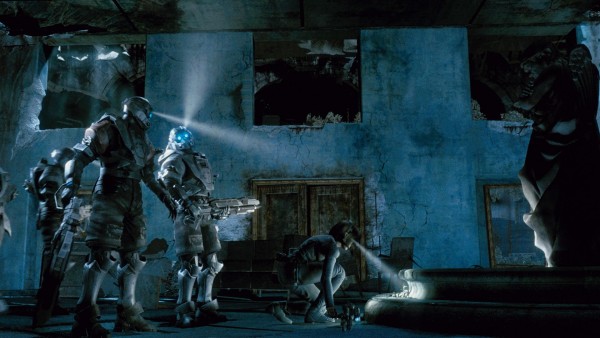 With the promise of newer franchises and different approaches taken with movies based on video games coming on the horizon, I hope that more studios decide to take a similar approach to The Spirits Within: one that doesn’t plainly cater to anyone but a fan of the series, that demands that anyone new to the franchise do a little research or even play the games to really get why things make sense in the movie; one that asks a little more of the viewer than a brain vacation, something that shows the studio making it and the company investing its property aren’t afraid to take a few risks. While The Spirits Within was far from a perfect movie it stands as a great example of, if perfected, what a movie should definitely aspire to be: sometimes the best things in life aren’t always crowd-pleasers and there could stand to be more people that adhere to that mentality.

If you can find it on Blu-Ray, snag it up. Not only is it fairly rare – at least, around my parts – it’s also a decent movie if you come into it with little expectation and you can find it for a very decent price if you find it in a bargain bin somewhere. That’s how I stumbled upon it: at a Blockbuster bargain bin about five years ago. Check it out, it’s not the best rated video game based movie for no reason at all.