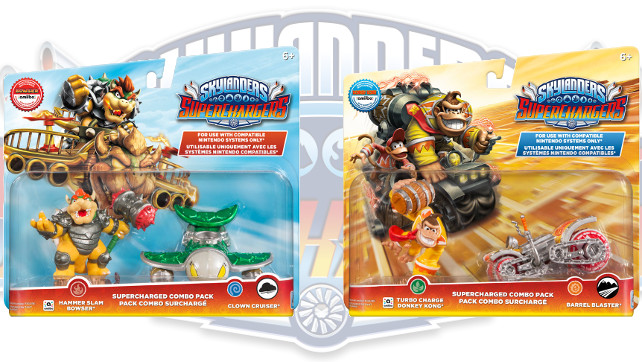 Last year, Activision joined up with Nintendo to release exclusive Skylanders for their latest game Superchargers. The team up brought Donkey Kong and Bowser to Skylanders Superchargers as guest stars. These special characters were previously only available with the starter pack of the Wii, Wii U, and 3DS games so if you didn’t want to buy one of each you were out of luck.

Each pack comes with one of the two Nintendo characters and their signature vehicle, including Turbo Charge Donkey Kong and his land vehicle, the Barrel Blaster or Hammer Slam Bowser and his Clown Cruiser sky vehicle. In addition to being fully playable in Skylanders SuperChargers for Nintendo Wii U, Wii, and Nintendo 3DS, Turbo Charge Donkey Kong and Hammer Slam Bowser can also be used with select amiibo-compatible games.

No word on if the dark editions will see individual release.

The Skylanders Superchargers Nintendo SuperCharged Combo Packs are available now with an MSRP of $24.99.