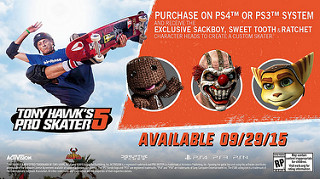 Over on the PlayStation Blog the president of Tony Hawk’s Pro Skater 5 developer Robomodo has released some new details on the game’s next-gen exclusive multiplayer modes along with the first in-game trailer.

Online free skate mode has been converted into a lobby of sorts for up to 20 players to connect and mess around between missions and other online modes. While in free skate you are able to leave the lobby and enter into completive modes / missions or change your party make up at any time.

Playing THPS5 on any Sony platform will unlock Sweet Tooth, Sackboy and Rachet heads for your custom skaters.