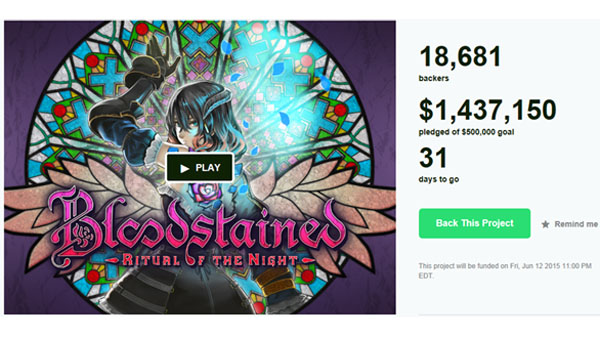 Koji Igarashi won a victory for all gamers who have wanted more 2D Castlevania RPG styled action. In a stunning victory, his Kickstarter has almost generated a million dollars more than requested. It’s clear that gamers have been eager to play more of Iga’s creations.

It’s wonderful that we’re getting a new Igavania as it’s being cutely called, but the way is certainly disheartening. Instead of the big exciting climax Castlevania was building to, we’ve had to go around copyright and support a new franchise in Bloodstained. Don’t get me wrong I’m sure Bloodstained will be fantastic and I’ll love it! The more of these games the better!

I’m just sad we’ll never get that final climax in a 2D Castlevania game. It felt like Castlevania was potentially leading up to a gripping ending with a final battle of all time which would occur in the year 2000. Thoughts of series favorites rushing through stages designed to look like modern day cities infused with the castle itself in a bustling city were something I’d eagerly anticipated. Whether that was the actual direct is up for speculation but instead we’ll need to move on. Much like Mega Man fans have had to besides enjoying the adventures from Archie Comics.

Hopefully we won’t need to worry about more titles going this way in the future. Classic franchises shouldn’t be forgotten. It actually makes one wonder just how many games are out there that fans would clamor for a sequel to. Personally, besides Castlevania being top on my list and Bloodstained being a dream come true, I’d love to see a new Doki Doki Panic / Super Mario Bros 2 USA game. With the success stories on Kickstarter lately, it makes me think that I’m not alone in many of my ideas either.

While we’re on the topic, it wouldn’t be a bad idea for Nintendo to release a new Super Metroid styled game. Just look at the success of this Kickstarter alone which focuses on Metroid like exploration.

Congratulations Koji Igarashi! You and those who work with you have given us some of the best entertainment we could have asked for. We’re eager to welcome Bloodstained with open arms and continue our adventures in your new world.