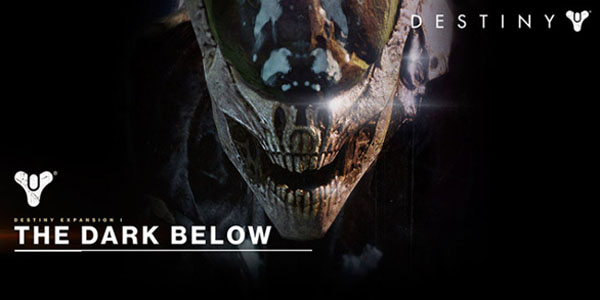 Ranging between Earth’s Cosmodrome and The Hellmouth pit on the Moon, Destiny gamers can now purchase Bungie’s first expansion. Don’t be fooled into thinking there’s just a new raid here. Be sure to stop by the Tower after picking up the The Dark Below expansion and talk to newcomer Eris. She’ll have some bounties for you that will unlock new missions.

If you’ve played Destiny on Earth or the Moon recently, you’ve seen increased activity from The Hive foes. This DLC continues that storyline leading into the darkness deep within the moon where the latest raid takes place. What else is in store and what other goodies do you get? Read on for the press release from Activision!

Destiny Expansion I: The Dark Below features the following:

• New Loot – Earn new weapons, armor, and gear, including new Legendary and Exotic items.
• Level Increase – Raise your Light Level to 32
• New Story Missions and Quests – Journey through new Hive-themed story missions and quests where you are tasked with stopping the resurrection of an ancient god, Crota
• New cooperative Strike – The Will of Crota, pits you and your Fireteam against Omnigul as she works to expand the Hive army at the command of her master, Crota
• New six-player Raid – Assemble your six-player Fireteam to attempt Crota’s End, set deep within the depths of the Hellmouth with all-new gameplay mechanics and enemy bosses
• New competitive multiplayer arenas: ◦ Pantheon – Set in an ancient Vex temple inside the Black Garden that features Vex-designed landscapes and tight corridors
◦ Skyshock – An old interplanetary defense array that offers engagements for both vehicle and infantry
◦ The Cauldron – An abandoned Hive ritual site that offers close-quarter combat
• New EV-30 Tumbler Sparrow – Players that purchase and redeem the Destiny Expansion Pass or Destiny Expansion I: The Dark Below by January 15, 2015 will receive the EV-30 Tumbler Sparrow, enabling its riders to drive fast, take flight, and perform a set of mid-air tricks
• PlayStation® Exclusive Content* – PlayStation® players will also get access to an exclusive cooperative Strike, The Undying Mind, and exclusive exotic weapon, The 4th Horseman shotgun